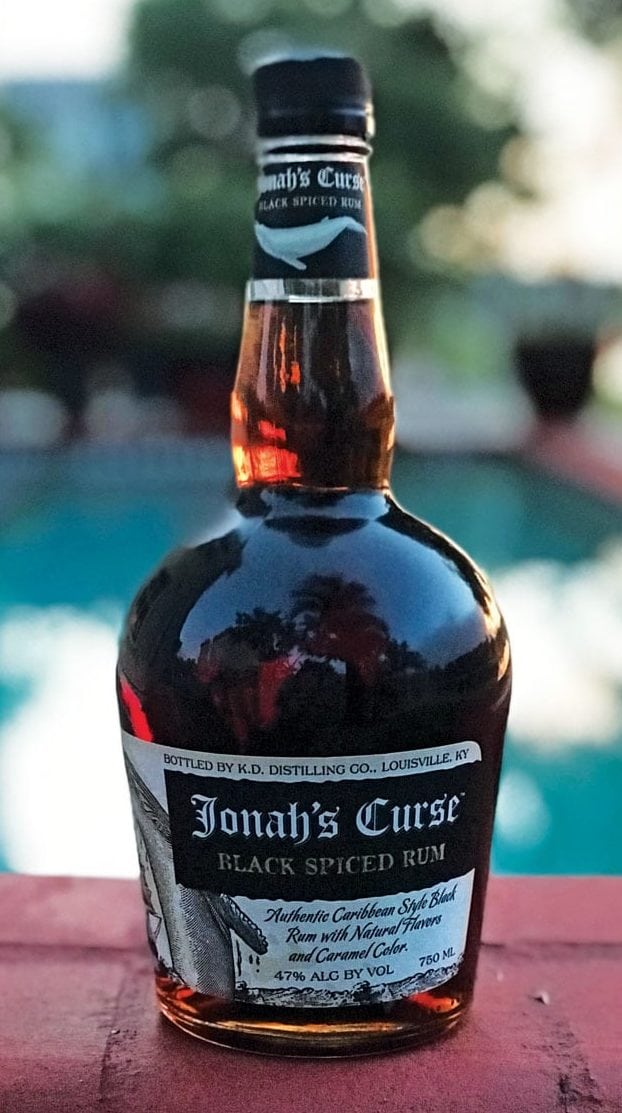 We have been passing over Jonah’s Curse Black Spiced Rum for years because, well, it’s a spiced rum.

Quite honestly, we are not rum and coke drinkers and in our opinion, the only spiced rum worth sipping has been the Captain Morgan Private Stock. This month we took the leap of faith and grabbed the spiced rum with the whale on its label – and never looked back.

Jonah’s Curse Black Spiced Rum is bottled by KD Distilling Co. of Louisville, KY, a division of Sazerac, known best for Buffalo Trace bourbon. Their website states the rum is distilled in the Caribbean from sugar cane with additional spices blended in to give it the spice. Many dark rums, including Captain Morgan Black Spiced, are known as blackstrap rum whereby the darkest molasses produced is used to make the rum. Jonah’s leaves us guessing whether this method is used. Like the rest of the rums in this category, Jonah’s weighs in at 94 proof, far above the typical 80 proof of most rums.

We tested the rum several ways: neat, with an ice cube and twist of lemon, then in the standard rum and coke. To say we were pleasantly surprised is an understatement.

The nose is totally unexpected for a spiced rum. Vanilla, caramel, banana, mocha and oak fill our senses, leaving us to wonder if this is really a spiced rum. Where is the spice? The rum coats our palates with the vanilla and caramel followed by an ever so slight hint of cinnamon. The cinnamon continues to warm the throat giving us a toasty and comforting sensation.

Shave a small piece of the lemon rind then twist to release the essence before dropping into the drink. That little bit of lemon and ice completely changes this rum. The same notes of vanilla, caramel, oak and cinnamon are there however, the lemon brings out more of the cinnamon, settling the sweetness. The finish, though, is not as satisfying as the notes dissipates quickly.

Here is where we differ a bit on our palates. Clint does not get any rum taste. He states, for him it’s just a subdued Coke. Terry, on the other hand, found this drink to be a bit dangerous for her, saying the rum balances out the syrupy-ness of the Coke, allowing the rum to come through. After discussion, both agreed there is no spice coming through in this cocktail. That was what Clint was missing.

If you truly like the taste of a spiced rum such as Kraken or Captain Morgan, then this is not your rum. The spice is very subdued. However, unlike the other spiced rums, Jonah’s drinks more like a 12-15 year old sipping rum. At $17/bottle, we will have one in each of our liquor cabinets, boat and home.