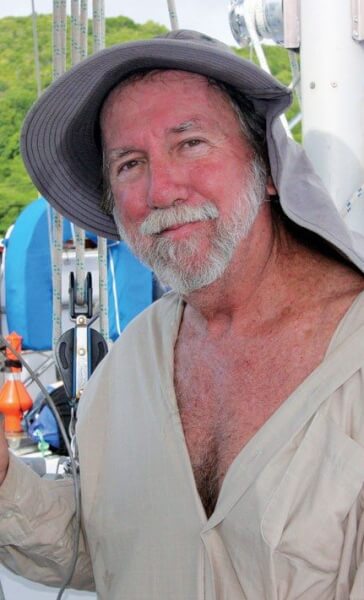 It was somewhere in the Carolinas, along the Intra Coastal Waterway, on the east coast of America. He was a dock jockey at a rickety old marina, and I was a tired yachtie running south, away from winter. I swung alongside his fuel dock and refueled nervously as there was a considerable chop and crosswind pushing me onto the piling. Besides, there were a number of vessels waiting.

We were near an inlet, so there was a considerable tidal current running as well.

While Carolyn was paying for the diesel, I surveyed the hodgepodge collection of docks.

“What do you mean can’t?” asked the kid.

“Can’t or won’t—whatever,” I replied. “That corner getting into D12 is tight. There’s a cross wind and about a two knot current. I’m scared I’ll end up swept down. I want to spend the night resting, not filling out insurance forms …”

“You just buy the boat?” the kid sneered.

“Yeah,” I said breezily, being on my 25th year of cruising. “I did. And I’m not too good at handling it. How ‘bout putting me on the end of D dock—where I can power into the tidal stream, not have it on my transom?”

The kid was making a big deal of it. “Well, I suppose that one would be a lot easier if you were having difficulty handling your vessel.”

It was noisy and confusing inside the baitshop/fuel shed. People were arriving and leaving and buying ice and paying slip fees—and somewhere in between all this chaos, the kid assigned D12 to a twin screw powerboat with a flying bridge.

I figured the guy was a local, familiar with the area and its currents, and knew how to effectively use his two engines.

A few minutes later, we heard shouting and the panicked roar of big engines in big trouble. People were running. CRASH! The corner of the powerboaters transom clipped a protruding bowsprit, and this pushed his bow to port into the transom of a houseboat. Instead of doing nothing and minimizing the damage—he panicked and gunned it. Stanchions snapped. Outriggers fell. Flag staffs broke. His bow anchor hooked a stern-rail mounted BBQ grill—and carried off both, dangling.

Sailing With Charlie: Look Before You Leap

“Idiot,” the kid said under his breath, watching half the boats in his marina being needlessly damaged.

“Yah, lots of those around here-ah,” I said in my best Downeast accent.

“It means I rest my case,” I said as I turned away.

‘No’ is one of the most important words in a captain’s vocabulary. This is especially true if you’re a professional delivery skipper. I was once flown to Newport to deliver a racing boat to England—with the owner aboard so he could ‘learn the arts of offshore first hand’. The boat was supposed to be brand new and completely sea-trialed, or—as they always tell you, “All set to go!”

The owner was—or he considered himself to be—a hot-shot racer who was a tad ‘short on offshore experience’.

He was a lawyer from Albany, New York, and at least knew enough to know that going transatlantic was beyond his skill set. Nonetheless, when I arrived he gave me a ‘chart and weather course’ to acclimate me to the task ahead, and then said, “We’ll leave on Thursday, the day after tomorrow.”

We went down to the boat. It was a fast & light design, sure, but it was also built like crap. It was strictly an ‘around the buoys’ design. I’d have to nurse it across the Pond. The first thing I did was grab a hose laying on the dock and gently flow some water over the cabin trunk.

The deadlights didn’t just leak—they gushed. One was dripping right into the SSB; the other on the port bunk.

“This boat has never been offshore, has it?”

“No,” he said, “but don’t worry. I launched it in a small lake behind my home—and prepared it for offshore there.”

I looked at the reefing system. At first glance, it appeared the clew line on the second reef might be led wrong. On second glance, both reef lines were wrong.

“The boat has never been reefed?”

“Well,” he said, “it’s all set to. I followed the drawing in the Harken catalog exactly. But, no, I have never actually reefed it because, you know, there’s not much wind on the lake.”

“Well, there’s plenty of wind in the North Atlantic,” I said dryly.

I spend the next few hours making a list of all the things that needed to be done—and purchased/installed/tested before I’d bring the boat offshore.

“Don’t be silly,” he said in amazement when I presented it to him. “I mean, I’ve researched this! I’ve read Don Street and the Pardeys …”

I ignored him. “If we hustle and don’t run into any major problems, we should be able to leave within ten days to two weeks. I’ll give you a list of the major safety items to be ordered and …”

“I’ll take responsibility,” he said, stopping me in my tracks.

“For leaving,” he said. “Thursday is a perfect weather window—that’s not just my opinion, Fatty, it’s the opinion of the Boston weather router I’ve hired as well. Besides, I’ve got an important case coming up—and we need to leave soon as possible so I can get back in time for it.”

“No,” I said. “I’ll take responsibility for when we are ready for offshore and when we leave. Period. You hired me for my experience, and, frankly, this vessel is a long way from ready for offshore, she doesn’t even have a bucket nor manual bilge pump nor liferaft!”

“I insist …” he started to say, but I held up both my hands to stop him. Then I started to walk away.

“Where are you going?” he asked.

“You can’t,” he said, both desperate and angry now. “You promised! I paid for your flight here to deliver my boat—and you haven’t done that. You’re in default of our agreement.”

About six months later, I heard he’d sold the boat after being in a ‘major storm’ which scared him.

Yeah, storms can be scary—especially when the vessel isn’t prepared for the conditions it is likely to encounter.

Example: my wife Carolyn and I never enter a strange harbor at night. It is a very simple, very ‘black and white’ rule. There’s little wiggle room. It is not a judgment call.

I was recently on passage and approaching land with a large catamaran just ahead. It was late in the day. When I advanced my DR, it put me at the harbor entrance one hour after dark.

“I’m going to heave-to out here,” I said to the other vessel. “I’ve never been in that harbor before.”

“It looks straight-forward on the chart,” he said.

“That’s what worries me,” I said. “Most of the vessels that are lost have a very confident guy at the helm—otherwise, they wouldn’t be lost!”

“But, hey, seriously,” the guy said, “I’ll go first. I have radar, a night vision camera, and a forward-reading depth sounder. I think I can make it. I’m sure Carolyn would like to be in safe harbor tonight.”

I didn’t say it but I thought: what part of ‘no’ don’t you understand?

The following day, I heard he was yakking on me about being timid and paranoid. “Any idiot could have done it,” he was saying with a self-satisfied smile.

Tips on How to Med Moor Dock your Boat

A few days later he was telling me of his recent Euro cruise—and how he’d been hauled out for many months in Portugal.

When questioned, he admitted that he’d been coming into a harbor at night, with all his marvelous toys whirling and twirling and swirling and beeping, when …”

I managed (barely) not to chuckle.

I love these ultra common excuses such as, ‘unbeknownst to me, there was a drain on the batteries’ and ‘the weather report predicted only 30 knots but it was gusting over 50!’ and the very best of all, ‘the rock wasn’t on the chart!’

As a sailor who would like to continue sailing offshore until my health prevents me from doing so, I am trying to develop a series of rules, procedures and systems of thinking that will allow me to do just that, safely and serenely.

I have never had a major problem offshore that I could not handle—and I’d like that to continue.

Whenever an inexperienced skipper tells me, “I think I can make it,” I think to myself: Then don’t try.

The real question isn’t whether I can enter Chancey Harbor on this particular night—I may be able to or I may not—but if I should even try?

And if I do try and do make it tonight, how’s that going to effect tomorrow night’s decision?

Only the captain can—and often should—say no. It is a simple word—short and sweet—which should be used far more often than it is.

Do you have the spine to “Just say No!”  Chime in below through the comments…

So you Wanna’ Buy a Boat? Why do you Want a Boat?