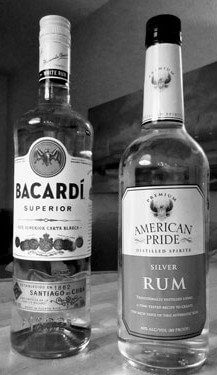 When it comes to purchasing a mixing rum we typically go bottom shelf, reserving our cash for the finer sipping rums. That philosophy recently got us thinking.

Is a more expensive, top shelf rum worth the extra money and could we actually tell the difference in a basic Rum and Coke?

Bacardi Superior, a Cuban style rum dating back to 1862, has long been the benchmark for a proper Rum and Coke. On our local shelves, the price of a 750 ml bottle averages $11.00.  That’s just a few dollars less than what we typically pay for a 1.75  liter of mixing rum. For this test we opened up our wallets to purchase one bottle of Bacardi and one bottle of American Pride Silver —  a U.S.A., made rum at $7.00 / 750 ml.

How did we create a controlled, blind taste test:

Terry filled four glasses with equal amounts of ice, 2 ounces of rum, and each topped with Coke made from pure cane sugar, two drinks with Bacardi and two with American Pride. Each Bacardi glass had a piece of tape on the bottom to distinguish from the American Pride. Terry then gave Clint his two drinks indicating which would be his test one and test two. Clint then mixed up the remaining two glasses behind Terry’s back, then presented to her. Let the test begin.

Drink number one has a very strong alcohol taste that overpowers the sweetness of the Coke. This tastes more like a Coke and whiskey instead of rum. Drink two has a mellow, smooth, rum taste which compliments the Coke. This is a true Rum and Coke.

My drink one also has a very overpowering alcohol taste. The soda mixer in this could be generic for all I know. There is no sweetness here, only bitter. I don’t even want to finish. Drink two is a more balanced cocktail which is pleasant to sip with no after-taste. Very enjoyable.

Holy Moly. We didn’t expect those results. We pulled in our friends who were more than happy to do the same blind taste test.

Could our Friends tell the Difference between Top Shelf and Bottom Shelf Rum?

Drink one has an initial bite which lasts straight through to the finish leaving a bitter aftertaste. We wouldn’t think this was a rum and Coke if you hadn’t told us. Drink two is sweet, smooth and enjoyable.  More please.

Is Top Shelf Rum worth the extra Money as a MIXER?

If three out of four chose the cheaper American Pride over the Bacardi Silver, does that mean the Bacardi is not worth the extra money? Not so fast. Maybe more testing is needed with cleaner cocktails such as the Mojito or a Pain Killer. For now, we’ll put our liquor budget into fine sipping rums.