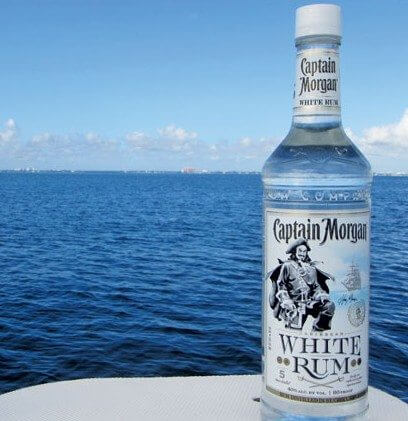 After our review “Top Shelf vs. Bottom Shelf” hit the stands, reader John Sans wrote, “Please try the control test without using Bacardi. Though Bacardi may be the best selling rum in the world, that doesn’t qualify it to be the best tasting…Maybe try the test next to Cruzan or even Captain Morgan White.”  Challenge accepted.

Until recently, ordering a Captain and Coke referred only to the use of Captain Morgan Original Spiced Rum. In early 2014, Diageo, producer of the Captain Morgan brand, released its first white rum entry into an extremely competitive market dominated by Bacardi. Captain Morgan White Rum is distilled five times, aged in oak barrels then filtered to strip away any color.  For a white rum, the nose is actually quite complex. We detect vanilla, molasses, a faint citrus and a bit of light spice.

Once again we created a controlled, blind taste test, but this time instead of making two drinks each, we made one of each rum to share. Let’s just say we learned something from the last test.  After Terry mixed the drinks, then Clint did the switcheroo so neither one of us knew which rum we were drinking. Let the test begin.

He Said
My test began with drink two. This drink seems out of balance but I’m not sure if it needed more rum or Coke. The rum is lost and the Coke reminds me of the Shasta Cola my parents used to buy. Drink one truly raises the bar. The Coke compliments the rum well, allowing the characteristics of the rum to shine. I definitely can tell this rum was aged in oak barrels. With each sip the complexity of the rum dances on my palate. Now I know why Terry left me so little.

She Said
While Clint was experiencing drink two I found myself enjoying drink one so much I needed to remind myself to save him some. The drink was very pleasing with notes of coffee and a hint of vanilla. With each sip another layer comes through. The Coke plays a good supporting role.  Is drink two actually a rum and Coke?  If I was served this drink in a bar I would send it back as a mistake. There is not rum flavor at all nor is there a sweetness from the Coke.  It’s flat and unimaginative.

Conclusion
Clearly the Captain Morgan White wins hands down and yes, Mr. Sans, far superior to Bacardi. There is a complexity to this rum which you don’t often find in a white rum. Move over Bacardi, there’s a new rum in town.