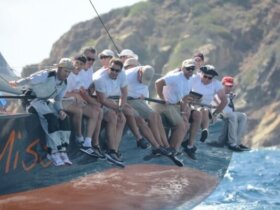 St. Thomas, U.S. Virgin Islands. Gunboat and VX One classes are first-ever additions to the St. Thomas International Regatta (STIR). Set for March 25 to 27 and hosted out of the St. Thomas Yacht Club, the 16 entries – 4 Gunboats and 12 VX Ones – are among a sleek fleet of 80-plus yachts registered to race. What’s more, these two classes add even more America’s Cup and World Champion talent to the Olympic and Caribbean rock star teams that have long made STIR the ‘Crown Jewel of Caribbean Sailing’.

This year STIR welcomes a large multihull class, in addition to its perennial beach cat class. It’s no coincidence that original Gunboat builder, maker of some of the fastest multis in the world and two-time (2013 and 2017) America’s Cup rule maker, Pete Melvin, will be racing aboard one of these boats – the Gunboat 60, Fault Tolerant.

“I am looking forward to sailing with old friends,” says Melvin, partner in Morelli & Melvin Design and Engineering, based in Huntington Beach, California. “The owners of Fault Tolerant, Rob and Libby Alexander, Andy Morrell, and I were all on the Boston University sailing team at the same time in the 1980s, so we will be embellishing stories about how great we were back then. I am also looking forward to sailing in the multihull fleet. The original Gunboats were designed by my company and it will be interesting to sail on Fault Tolerant and learn how she sails.”

“We have raced the St Thomas regatta several times, most recently on our Swan 42, Arethusa,” says Lotz, who was the Swan 42 National Champion in 2009 and 2010 and second place finisher in the multihull class in this year’s Quantum Key West Race Week. “We always enjoy the regatta and the course around the islands. This will be our first season racing the Gunboat so we are looking to learn.”

This will also be the first season of Gunboat racing for the team aboard Flow.

“Flow is a new boat to us as of last summer,” explains captain, Tony Teale. “We raced the New York Yacht Club’s Cruise to Maine and by the time we get to St. Thomas we will have competed in the St. Maarten Heineken regatta. Most of the crew are friends of Mr. Cucchiaro’s and have a long history of dinghy, keel boat and multihull racing. We are looking forward to competitive racing with a good fleet of Gunboats, including two identical boats.”

The VX One Class holds its first international event, the VX One Caribbean Cup, a two-leg series that starts with STIR and concludes at the BVI Spring Regatta. This exciting and fast-growing class is now sailed in 9 countries worldwide.

One of the dozen 19-foot VX One’s competing in this one-design class is Australia’s Andrew York aboard his Australia Two.

I look forward to sailing against my U.S. VX One friends in good breeze and open water,” says York, whose sailing credits include representing Australia in twelve World Championships in four different classes, competing in two America’s Cups and coaching at a national and Olympic level. York’s crew are fellow Aussies, the father and daughter team of Rob and Nicole Douglass. Together, the Douglass’s have won multiple Australia Tasar titles and two World Championships. Separately, Rob is a Spiral National Champ and Nicole has competed on Australia’s Women’s World Match Racing Team.

One of the U.S. teams York will be testing his skills against is George Gamble aboard his VX One, My Sharona.

“Beautiful clear warm water, great competition and a stiff breeze is what we’re looking forward to,” says Gamble, who won the J/111 World Championship and finished third at the VX One North American Championships last year.

It’s a family affair for another U.S.-based VX One team on Commando. Helmsman Andy Walford, will be joined by crew of wife, Beth, and eldest son, Richard.

“As club level sailors, we are looking forward to some warm water sailing in the brisk breezes of the Caribbean and a competitive regatta,” says Walford, who grew up dinghy sailing in the UK before moving to the U.S. in the late 1980’s where he sailed in the 505 Worlds in 2004 and Melges 24 Worlds in 2011. “The VX One is well suited to the conditions to provide a really exhilarating ride. Along with the shore activities, it’s going to be a great vacation.”

Entries Grow for New Round the Rocks Race

Six entries are already signed-up for the first-ever Round the Rocks Race. Set for March 24, the race, independent of STIR, features a point-to-point course around the island of St. John with separate scoring and a special prize-giving awards. There will be a large perpetual trophy for the fastest elapsed time and first through third trophies for each class. Three Gunboats – Arethusa, Fault Tolerant and Flow, as well as the TP52 Spookie, are among the entrants.

“We purchased the TP 52, ex-Interlodge, in June,” says Steve Benjamin, who was named 2015 Rolex Yachtsman of the Year, and who with wife Heidi raced their former Spookie, a Carkeek HP 40, in last year’s STIR where they won the CSA 1 Class. “So far we did two of the 52 Super Series events in 2015, the Copa del Rey Manfre and the Cascais Cup, and finished 8th in both. In January, we won the Lauderdale to Key West Race and finished second at Key West Race Week. We’re looking forward to as much racing in the Caribbean as possible and very excited about racing around St. John as we know it is a challenging venue with lots of shifts and strong winds. Peter Holmberg will be joining Heidi and I and we’re putting several of the veteran Spookie team back together with a few young guns!”

STIR 2016 is sponsored by Cruzan Rum and Presidente, distributed by Glazer’s Premier Distributors; and the U.S. Virgin Islands Department of Tourism.