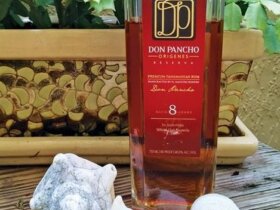 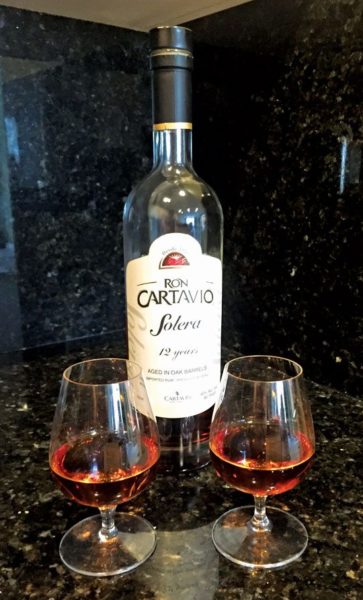 Our review process began like most – peruse the rum aisle trying to remember what we have already reviewed then schedule time on our boat to enjoy. This month we selected Ron Cartavio Solera 12 year from Peru since Clint was heading to that region soon. During this step though, Hurricane Irma was battering the Caribbean before setting her sights on South Florida. They say people grab what has meaning to them when they evacuate their homes. Don’t judge us but we grabbed the rum and headed for our dear friend’s house up north. We thought it might help.

Established in 1929, Cartavio Rum Company has gone through several ownerships including being taken over by the Peruvian government due to land reform. In 2013, the company updated its processes of fermentation, distillation and bottling combining the latest technology with traditional techniques for aging and mixtures. Today the company has the only continuous fermentation plant in Peru with recirculation of yeast. This method allows for a continuous stream of diluted molasses which keeps the yeast thriving while liquid is extracted from different places in the tank that is ready to be distilled. In 2013, the company came full circle, coming once again to be known as known as the Cartavio Rum Company.

We thought it would be fun to get our friends in on this month’s tasting, offering us their novice viewpoint.

Guys Said
The nose burst with orange, vanilla, and oak with a slight floral hint. These notes come through on the initial sip with more emphasis on the floral. The alcohol burn is quite strong leading our friend to compare the rum to Skydrol hydraulic fluid use in aircraft. With each additional sip, the rum really settles bringing out a hint of caramel which calms the alcohol. The finish is nice and smooth with the floral notes lingering longer than expected.

Girls Said
The dark amber color provides a nice lacing on our glasses. The nose is inviting, full of vanilla with a little orange peel. Immediately on the tongue there is cinnamon which burns and drowns out the vanilla and orange. We agree with the guys that with each additional sip the rum really settles and more flavors come through. Raisin, cherry and toffee become more prominent. The finish is smooth and comforting bringing back the vanilla and orange notes.

Overall
We all agree that the initial burst is powerful, however it settles out in its own time. Though the finish is very smooth that burst in the beginning may turn people off. Also, $40 is a bit high for this rum.

Is Rum Keto Friendly? Is Rum derived from sugar, sugar-free?

Is rum keto? Aren’t you concerned about all that sugar you are pumping into your body when drinking your beloved rum?

This month we decided to dive into the spiced rum pool and compare: Captain Morgan Spiced Rum vs Sailor Jerry.

After picking up Brugal 1888, at a significantly higher price point, we wanted to know how it compared to the Brugal Extra Viejo