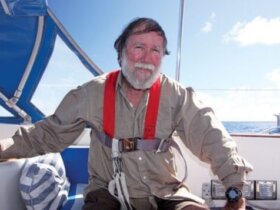 Since the beginning of recorded history, we’ve known that hurricanes exist in the Caribbean.

San Rogue packed a pretty good wallop, and was recorded in 1508 and it pelted Puerto Rico. A couple of hundred years later Father Benito Vines started a Met office on Cuba in 1870, and gave a warning of an impending storm on August 23rd, 1873.

In the States, citizens were disappointed by the Signal Corps failing to adequately warn of the hurricane of 1875—hence, the problem of how to get the word out to the public was studied. It was decided that warning signals flags should be hoisted as a storm approached, and a red background with a black rectangle was decided upon. By the early 1900s, radio reports concerning storms were being broadcast to the maritime community via shortwave, with path predictions beginning by the US Weather Bureau in 1920. By 1935, there was a special focus on hurricane predictions; a year later, Cuban weathermen sent a plane to intersect a passing storm. By 1953, storms were being named—after women, the misogynists decided. Weather balloons soon gave way to weather satellites. In 1956 the National Hurricane Information Center was formed.

So, the existence of tropical hurricanes—and their massive destructiveness—has been known for a long time. What has changed in modern times is their frequency.

When I first arrived as a cruising sailor to St. Thomas in the late 1970s, hurricanes were few and far between. I remember asking about them when we pulled into Charlotte Amalie. The consensus at the Bilge (the rumshop above the fuel dock at Yacht Haven) was that, yes, indeed hurricanes existed and had hit some small islands between the Virgins and Trinidad a dozen years back. None of the sailors at the bar were exactly sure about hurricane season—it peaked in either later summer or early fall. Regardless, there was nothing to worry about. Chances were slim.

I asked my West Indian friends about hurricanes—and they, too, seemed to think of them as an abnormality that might happen once-in-a-lifetime but probably not. All their stores started wid, “Me grandfadder say….”

Basically, I and most of the liveaboard marine community of the Virgin Islands just ignored hurricane season until September 17th, 1989, when a category four storm called Hugo stalled over St. Croix and decimated the nearby island of Culebra where, alas, I’d sought safe harbor. (Oophs!)

My wife Carolyn, daughter Roma, and I lost our self-built 36-foot ketch Carlotta in Culebra—an event which took us ten years to recover from financially—and considerably longer psychologically. (I’m honestly not sure we ever have, really.)

Since 1989, major storms have been shot-gunning the Lesser Antilles with increasing regularity.

Strangely, it isn’t the death toll that makes a storm famous—it is how badly it ravages the corporate pocketbook. Nobody cared about the Storm of 1780 that took 27,000 plus lives in the Lesser Antilles—nor the storm that hit Bangladesh and killed over 50,000 folks via its storm surge alone. It’s storms like Andrew, Katrina, and Irma that make the headlines as the insurance companies are forced to pay out. 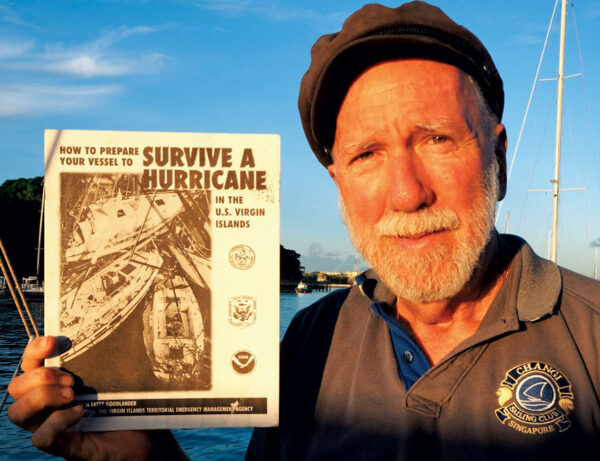 Irma, a Cape Verde storm, struck the nor’east Lesser Antilles in September of 2017. It was a category five, with a central pressure of 914 hPa (27.0 in Hg) and sustained winds of 180 knots, with gusts into the low 200 knot range.

While it did extensive damage in the continental US, it totally devastated Barbuda, St. Barts, Sint Maarten, Anguilla, Puerto Rico, and the Virgin Islands. It caused 134 confirmed deaths—with dozens more still unaccounted for.

This was the storm that convinced many Caribbean sailors that NOAA should add an additional ‘super storm’ category—or perhaps even revise the whole rating system to include future storms up to, say, 300 knots.

Our current Atlantic hurricane season is expected to be ‘above average’ with 13 to 19 named storms, of which 6 to 10 could become hurricanes—3 to 4 of those might be ‘major’ storms.

Why is the prediction above average? Warm water, for one. Another factor is the neutral El Nino Southern Oscillation—meaning there will be no El Nino this season to suppress hurricane activity. Another factor—strong African monsoon rains.

If all that isn’t bad enough, NOAA warns that COVID-19 should factor into your storm prep by, for example, having plenty of face masks in inventory prior to the storm—and then practicing social distancing upon survival. (As if residents of the Lesser Antilles didn’t have enough to worry about, right?)

Yes, FEMA has a free app for that—which will give real-time alerts and share notifications with loved ones via text, email, and social media. There’s a list of shelters and disaster recovery centers—you can even apply for disaster assistance online via the app, which toggles between English and Spanish as well.

In the short term, future hurricanes will increasingly use hi-res inner cloud core analysis to provide better accuracy of prediction—in the long term, because of man-made global warming, it is expected that hurricanes will become bigger, stronger, more expensive, and more frequent.

However, exactly how global warming will affect our weather and, thus, the Caribbean hurricane season, is unknown.

For instance, as the planet warms—it is quite possible (actually, probable) that certain locations will get colder. And wetter. Or drier.

Where drought was once a problem, now soil erosion due to flash flooding may be a factor. And, of course, vice-versa. Topsoil is precious stuff. Suitable soil and suitable weather might not coincide.

Hurricanes are viewed by some observers as giant ‘temperature compensators’ and just how all these climatic changes evolve in relationship to each other is a big question. For example: hurricanes might just become fiercer, or larger in overall area and less fierce, or milder and more year-round, or more concentrated for a short duration.

Also, there are ‘tipping points’ that, once crossed, will be hard to recover from. Since the dawn of recorded time, the Atlantic Basin has had a fairly stationary high pressure system called the Bermuda High. This not only influences the Tradewinds we experience locally—but the entire weather pattern for the east coast of the US and the west coasts of Europe and Africa.

More importantly, these clockwise swirling winds over the centuries have generated the Gulf Stream—which, for instance, warms England, cools the Caribbean, and moderates Bermuda and the Azores.

If the Gulf Stream stopped—which it could do with very little notice—most of western civilization would be impacted almost immediately because the crops mankind needs to survive would suddenly have to be grown somewhere else.

Ditto, the monsoon shifts of the Indian Ocean. Without the Gulf Stream or the monsoonal shifts, our ‘global food basket’ will be in considerable disarray.

Even the Sahara dust the Caribbean has been experiencing plays a part. This 4,000-mile wide cloud hasn’t just reduced visibility—it has almost put a cap on local thunderstorm activity. This might mean that instead of mid-September being the peak of the 2020 hurricane season—that it might come a month or so later.

Thus, the end of the hurricane season may be closer to December than November. Or, perhaps, the season will stay the same length—and just be more intense.

While much of this ‘whether yes or whether no weather stuff’ is still up-in-the-air—the good news is that our global civilization has thousands of meteorologists who are watching, measuring, and analyzing.

The rest of us laymen have a choice—listen to our experts and appreciate their informed opinion, or not. We could, for example, elect to ignore the science like America did with COVID-19 and reap the grim results.

We currently live—and die—in strange times. Is our species worthy of survival—or are we simply too selfish to band together for our own common good? A few years ago, I’d have been confident of my answer, but today I am not.