Returning to the Scene of the Crime 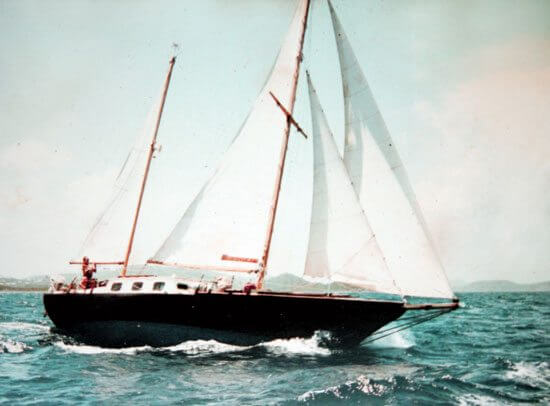 I don’t do it publicly. I don’t tell my wife Carolyn. Instead, as I sail around the world, I find a quiet cyber café—and I look at what remains of My Biggest Project. I am a secret, cyber voyeur to her watery burial ground. Well, not quite burial. Let’s say her mangrove-cloaked grave—better yet, let’s label this salty shrine her Final Resting Place. There, that’s it. That’s more accurate. I feel guilt and pride and horror—as I stare at her with sinful, morbid fascination. Google Earth is a strange thing. Her body lies exposed for the entire world to see. No matter how many times I gawk at her—in the flesh, in faded photographs, or on Google Earth—she scares me. She scares me on some primitive, dangerous level. My nostrils flare when I think of her—like a horse smelling fire. Yet I’m drawn to her. Like a murderer returning to the scene of the crime. I need to smell the carcass. Our love affair lasted 18 years and tens of thousands of ocean miles. And here she is—like a beautifully shaped stone, a personal 20,000 pound monument to my teenage tenacity. On Google Earth. At 18 degrees, 18 minutes, and 20 seconds north and 65 degrees 16 minutes, and 39 seconds west. Awash. Dead. Exposed. Abandoned. Wronged.

I guess that’s it. She has been wronged, terribly wronged.

By whom? Me? Her current owner? Fate?

Kids Bring Out the Kid in Me – Raising Kids Aboard

This I know: she deserved better. She was created for better. She was repeatedly promised better. Boats are alive. They have souls. I know this—like a saint knows Jesus. She was supposed to be the star in my life’s journey, not a footnote.

And I’ve callously moved on—first with the 38-foot Canadian girl and now with a 43-foot, 30,000 pound French lass.

Life is so strange. Sometimes it makes me want to puke.

I’m not sure why I do it, but I do it. I visit Carlotta—the vessel my wife Carolyn and I built in 1971 to sail around the world—immediately before and after every circumnavigation. It is a tradition, a very sad, perverted, gut-wrenching tradition. She whispers something to me—something that my heart understands and my ears can’t quiet hear.

Each time, I methodically salvage another memento from her rust-streaked hull. It is like knocking out the teeth of your dead lover—for her gold fillings. It seems both logical and completely callous.

Carlotta was a good boat, a strong boat, a faithful boat. She was our seashell for 18 years. She protected us—always, in all ways. She was faithful. We even raised our daughter Roma Orion aboard her.

In fact, Roma Orion factors into our current plundering of Carlotta’s grave. I want to make Roma a picture frame from the wood of her former ocean home. I plan on putting a cute picture of Soku Orion, our grandchild, within. I don’t want Roma to forget. I want Soku to know.

Know what? That fate is capricious. That the Gods like to joke. That it isn’t what happens to you in life, but how you deal with it.

And, perhaps, that adversity makes you stronger.

For better or worse, Carlotta still has a weird, bizarre strangle-hold on me. She has me by the throat, with a velvet sailing glove. She will forever, for all eternity. I will dream of her in heaven or hell. I am 60 years old. I lofted her and bandsaw-cut her frames at 19 years of age, 41 years ago. Still, we are lovers. Our life stories are intertwined. We weep for each other. “I’m sorry,” we croon across the decades.

To build a 20,000 pound ocean-going vessel from a few tattered sheets of paper and all the blood, sweat, and tears you possess—is a life-changing event. So is sailing that vessel across oceans. And living aboard her 18 years. But all things must pass. Hurricane Hugo was a Category Four, and it sat on us for 18 hours with 120 knot winds, gusting to 150 knots. For a long time, we held. Our five anchors were noble. We were one of the few vessels left in the harbor of Culebra—when the giant schooner Flyaway did exactly that. Gilly, her skipper, was crying like a baby as our vessels came charging together like demented rhinos. Kaye Gilchrist, his wife, had just drowned moments ago. Our bowsprit was entangled just aft of his starboard shrouds. I knew we’d have to rip major sections of our rigs off before disengaging. The sounds were awful as the boats ate each other, chunk by painful chunk. Our daughter, Roma Orion, was seven years old at the time. She was down-below, in her life jacket, her plastic-wrapped passport duct-taped around her soft body. The wind howled. Entire trees blew by—far, far above our mainmast. Oh, gosh—there went an inflatable with gas-tank-attached-by-hose overhead as well. The boat anchored next to us was a 60 foot Cheoy Lee motor yacht. Its large Boston Whaler has a big engine—and both spun crazily six feet above the water tied to an aft deck cleat—seemingly on a steel rod parallel to the water—like a pinwheel. I was knocked backwards into the cockpit sole by a particularly strong gust of wind. As I regained my feet, I noticed Polaris, the Cheoy Lee 60, was completely upside down, with twin props pointing skyward. Her cabin lights were still blaring away as she sank majestically. The world was berserk.  Flyaway was reduced to wood-kindling before my eyes. The wind shrieked like a million drowned sailors. Suddenly, Flyaway was gone—a floating pile of jagged lumber. Still, Carlotta clung to life. She was intact. A survivor. Our home. Our seashell. Our … protector.

The Ghosts of September

Our last (of five) anchor rodes parted. We were underway; in forty knots of wind. Visibility was feet. Our speed read 8.5 knots. A large aluminum mega-yacht appeared ahead in the gloom. I tried to bear off, and almost made it. Almost wasn’t good enough. We were heeled to starboard under barepoles, and our clipper bow punched through their aluminum topside plating like it was butter. The pristine yacht began to sink as the wind caught our exposed transom and we can-opened a huge, gaping gash in her port quarter.

I giggled. What else was there to do?

The storm surge was upon us. I saw only breaking rocks ahead. Strangely, there was the top of a tree in the frothing surf. I steered for it. Good move. We came to rest on a manicured lawn of a waterfront condo in Culebra.

… suddenly, life was like an old record that scratchily tossed off its needle. Time stopped, jaggedly. We were ashore. We were safe, sort of. In any event, we were alive.

Carlotta, however, was mortally wounded.

Hope is all I have in life—well, that and sweat and enthusiasm.

Some people in Culebra, however, were hopeless. Of the 350 boats ashore, many discouraged folks languished in the mud alongside them—awaiting their insurance adjuster, yacht surveyor, or the mythical crane from Vieques.

I wait for no one. Speed counts. You either get back on the horse—or spend the rest of your life pondering your failure to do so.

My first priority was, despite my empty pockets, finding a home for my wife and daughter. This I did within the month. Her name was Wild Card, a Hughes 38 sloop built in Canada. I quickly repaired her and sailed her back to Culebra—where I was amazed to find many of the shell-shocked survivors of Hurricane Hugo still living under tarps next to their vessels, awaiting their rescue.

Yachting Safety and Security in the Caribbean

Lesson #1: you are your own rescue.

Of course, I knew I had to do something about Carlotta. I could not allow her to clutter the front lawn of that condo forever. Alas, when I returned she was being stripped (and parts of her sold) by a local fellow. I saw red. I felt vulnerable and raw—and this was no time to mess with me. I called him up, and politely informed him I was going to kill him. (Great disasters make one bold. You do things you’d never do in ordinary life—your emotions are so twisted and torn.) He said he wanted to buy her—and would patch-repair and remove her immediately from the condo lawn. I had between $60,000 and $80,000 invested in her—not to mention two people’s labor for six years. Yet I sold my ‘ocean-going dream boat’ to that very fellow for a mere $1,600.

He kept his word, at least in the sense that he temporarily repaired and re-launched her. He and his family lived on her for years in Culebra. That should have been the end of it. I should have been able to wash my hands of her. But, alas, she was worth more apart than together—and he was poor. And she was not held together by his blood, but mine. He sold the engine and then he sold the rig… and, eventually, abandoned the hull in the mangroves of Culebra … years after I sold her to him.

… all of which has nothing to do with me. When you sell a boat or a car, it is out of your hands. Right? It is the other guy’s responsibility. Right? Right? Yeah, right! At least, that’s what my mind says intellectually. Alas, my heart sings a sadder, more conflicted tune.

So I repeatedly visit the grave—in person and via Google Earth. I endlessly play ‘what might have been’ during long, lonely tricks at the wheel. I politely tip my hat to her as I sail by … from the deck of yet another vessel.

In a way, I am grateful to Carlotta. Life is what life is. NOW is the only moment we have—and right now I realize that the best, most enduring benefit of building Carlotta wasn’t Carlotta—but the steadfast realization that, with my wife Carolyn’s help—I could do almost anything; that no project was too big, too long or too complicated; that I would always win in life because I would always persevere.

That’s a precious, righteous gift. That’s true personal empowerment. Yes, the price was steep, and I was forced to pay in blood. A bit of me dies each time I see her. I pay to this very day. Still, I continue to visit the grave—like a faithful lover should. I am still her best friend—as well as her Creator. I care. As long as I live, I will keep her memory alive. She will not die before me. And, eventually, we will be united.

Editor’s note: Fatty and Carolyn have just left on their third circumnavigation.

Cap’n Fatty Goodlander has lived aboard for 53 of his 60 years, and has circumnavigated twice. He is the author of Chasing the Horizon and numerous other marine books. His latest, Buy, Outfit, and Sail is out now. Visit: fattygoodlander.com