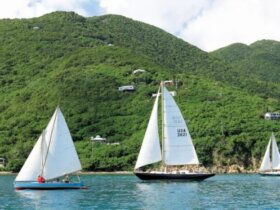 In late November 1984 Iolaire was anchored on the Northside of St Martin with the wind blowing a hooley out of the south. We were not worried, we had two anchors well set out in a Y to the South, sheltered by St. Martin from any sea. A small launch with two French Gendarmes came along side and warned “cyclone”- hurricane. It was late in the season for hurricanes, November 6 (in those days hurricane season ended Oct 31).

To figure out the hurricane center, I stood facing the wind, spread out my right arm which pointed West. Thus the low, the center of the hurricane was West of Iolaire. Hurricanes in the low latitude of the Caribbean always head West or Northwest, or so I thought. In my mind, the hurricane should be moving West away from us.

I turned on the radio and discovered I was wrong. The hurricane was heading Northeast, right at us . Our nice anchorage under the lee of St Martin would become a deadly lee shore. Iolaire survived using six of her seven anchors. I wasn’t going to be caught by surprise again.

Lessons Learned from the NOAA book Cyclones of the North Atlantic 1871 to 1975 with loose pages bringing it up to 1983.

Klaus was only the second hurricane since 1871 that started in the Eastern Caribbean and headed Northeast, the previous one Alice, Dec 30 1954, was the first one.

With the exception of the above type of hurricane, I realized it was relatively easy to statistically track hurricanes that will affect the islands of the Eastern Caribbean.

When is the End of Hurricane Season?

In the last thirty years there have been enough hurricanes in November to justify the insurance companies moving the closing date of hurricane season from Oct 31 to November 31. There also have been a number of December hurricanes.

Boats heading south to the Caribbean in late November or early December should contact a good weather router in the hope of avoiding a late season hurricane or a violent December storm.

A brief summary of Hurricane Advice.

Because of space limitations I have concentrated on advice for Hurricane alley, but the same advice is pretty much the same for all Caribbean islands.