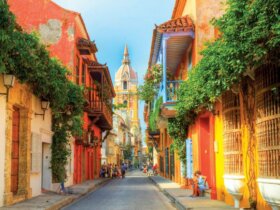 Time to Go to Cartagena

I finally put my foot down and told my wife Carolyn, “I want at least one night this month during which we don’t go ashore to a party!”

“That’s impossible,” she said, checking our social calender for April. “However, there IS a night at the end of May we could keep free… maybe!”

The Virgin Islands are a non-stop, multi-venue, eternal party—-par excellence! It never stops. If you don’t go out for two nights in a row, people grab you on the dinghy dock and ask, “You feeling okay?”

Once, when a St. John resident wanted to convey what a hardworking, driven professional I was, they told someone, “I’ve never seen him drunk before noon!”

Only in the Caribbean would such a statement convey the concept of straight-arrow-to-the-max!

Often my wife has us scheduled to go from mid-day party to afternoon gathering to early evening get-together… all before truly getting rowdy at the ‘main event’ party… which goes until the wee hours of the following morning… from which we rush back to our boat, crash, jump up, and, with a weary moan of utter disbelief, do it all again and again and again.

Being a member of the marine community of the Lesser Antilles is like being a marathon athlete—-you have to be in daily training or you just can’t keep up.

Then there’s all the ‘marine fundraisers,’ of course: KATS, the Boy Scout Fishing Tournament, the Pool Project of the St. Thomas Swim association, etc.

Next up are the various yacht clubs which have monthly social events in addition to their regular regattas… there are parties to raise money for people who are ill… to protect the environment… and to send needy kids off to college.

And, for a VI sailor, it is difficult to even GET ashore: rowing passed all the cockpit parties without stopping to chat is almost impossible.

The more parties you go to, the more you are invited to. Soon you are asked to help organize an event ‘for a good cause.’ You agreed, not realizing how much work it is. Overwhelmed, you ask a friend for help. They say okay, which immediately obligates you to go to EVEN more (their) parties.

Since I’m 1.) a writer, 2.) a local radio personality, and 3.) stupid… I’m often asked to ‘officially MC’ events. Or, to put it another way, my name comes up whenever groups of smart people say, “Who can we get to front this thing… MC it, so that if it blows up in our face, they get the majority of the blame?”

If a local sailor needs to go into rehab, someone stages a massive, wild party to pay for it—-and asks me to MC it. Ditto, when they ‘graduate’ from rehab. Ditto when they RETURN to rehab…

I’ll never forget the time I MC-ed Safe Boating Week for the USVI government. I only agreed to do it because it was such a massively audacious multi-media plan which entailed boats, planes, ships… and massive crowds lined up on the downtown waterfront of Charlotte Amalia. However, once the local government actually received the large amount of Federal funding… well, the original plan was sort of scrapped as too expensive… and the money was mostly eaten up in feasibility studies… and thus I lugged my PA system downtown, plugged it in, and MC-ed a ‘Safe Boating’ event which never really happened to a massive crowd of people who weren’t there.

It was, for me, a perfect Virgin moment. I’ll never forget it—-a wonderfully vivid example of how the USVI government functions… or rather, doesn’t.

My wife was with me and she was completely amazed I was able to address no one on the subject of nothing… at such great length.

“How do you do it,” she asked me, motioning at the emptiness, “…when there’s nobody there!”

“Ah, you forget my dear, I’m a hardened professional!”

Often, besides MC-ing I’m pressed into service as an auctioneer as well. I hate this: purposely getting wealthy people falling-down-drunk and then publicly attempting to berate/shame them into parting with their hard-stolen money!

However, I’ve done it for Pine Peace School, Antilles School, the Boy Scouts and various other ‘deserving’ groups.

Yes, it takes about ten seconds to get on the ‘A-list’ of party-goers in the VI. Example: the current Governor keeps inviting me to his parties! I can’t imagine why… perhaps because I’ve written a couple of stories in my life which doesn’t mention what an awful job he’s doing… and, thus, he’d be delighted to share my company?

Perhaps the strangest ‘public speaking’ thing I do is to act as a radio announcer during yacht races. I’ve done this during the Rolex, Heineken and Frenchman’s Reef International Match Race regattas as well as numerous BVI KATS event.

This is not easy. It is truly difficult to make yacht racing sound hyper-exciting. I’m always hoping I’ll get promoted to an easier job, say of covering a coat of paint drying or a blade of grass growing… something I could REALLY make audio-riveting!

The problem is compounded by that fact that we’ve been away from the Caribbean for a while—-all of our old friends want to hear, first hand, 1.) what a poor sailor I still am and 2.) how I have managed, at great intellectual cost, to have learned almost nothing during the last 50,000 miles of trans-cultural ocean sailing.

Since we don’t have an automobile—-hell, we can barely afford shoes—-we often move our vessel from bay to bay to attend these endless social functions. This means that, not only do I have to know where WE are at the end of the evening… I have to be able to remember where we anchored our HOME as well.

Of course, to a dirt-dweller this might sound easy, but, hey, in reality a Caribbean Captain’s job isn’t easy. I have to remember 1.) which boat is mine, 2.) which bay I anchored it in and 3.) which island said bay is located on.

See? The devil IS in the details!

The bottom line: you have to be focused! That’s right, you can’t allow your job, marriage, children, debts or health get in the way of a good party. I mean, forgot boat maintenance, personal hygiene and/or clean clothes! Sleep is out-of-the-question, dude. Ditto, health care: I mean, who has time to worry about their physical well-being when so many ‘good causes’ are clamoring for our cocktail-party attention? Who can afford to be so selfish as to skip two parties in a row—-not I!