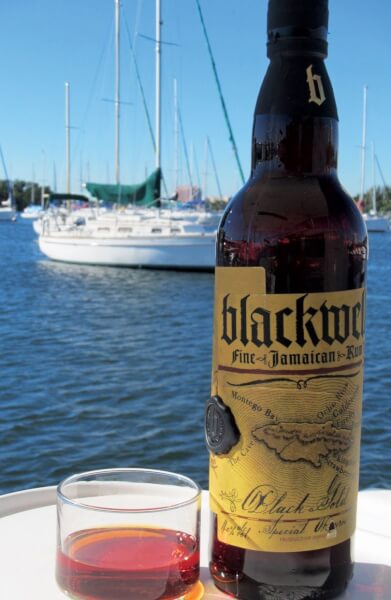 While searching for a new rum we came across a dark bottle which looked more like a specialty beer than a rum. The crookedly wrapped label depicting a pirate map was sealed with a black dab of wax and simply said “Blackwell – Fine Jamaican Rum.” At just under $30 it was worth a sip or two.

Give the Gift of Rum – The Gift that Keeps on Giving

ABOUT
Behind Blackwell rum is Chris Blackwell, founder of Island Records, who introduced Jamaican Bob Marley and rock legends U2 and Cat Stevens to the world. His mother’s ancestry is traced back to the oldest merchant family in Jamaica, the Lindo family, who came to the island in 1625.

Blackwell Rum is based on a traditional recipe from the Lindo family. Using small batch pot distillation the rum is blended by Appleton’s master blender, Joy Spence, before being aged just long enough in American oak barrels to give it its dark, golden color. Since introduced in 2008, distribution has now expanded beyond the Caribbean to the United States and the UK.

HE SAID
There is a slight vanilla scent here however, I’m getting more tropical floral hints as the base for the slightly sweet nose. There are no surprises on the tongue with no overpowering sweetness or oaky taste. From sip to finish this rum is mellow and very satisfying.  It tastes like a carefully crafted rum worthy of accolades. For a rum without the strong oak taste, I rank this pretty high on the sipping scale.

SHE SAID
Soft inviting nose with undertones of caramel. There is a burnt sugar smell hidden behind the caramel but it’s not put offish in the least. On the tongue the burnt sugar quickly plays with the caramel providing a extremely satisfying, comforting taste. There is no pretense here. What you get on the nose is what you get on the finish. This rum can easily become one of my go-to sipping rums.

OVERALL
Blackwell is a great sipping rum when you want something smooth and balanced. We found it hard to find any faults with this one. While it would make an outstanding mixing rum we think you should save Blackwell to share with friends during a nice sail.

About Clint and Terry: We have sampled many a dram over our 31 years of marriage and quite often we don’t fully agree. Could be the difference is male/female taste buds. Or, somebody is just wrong.