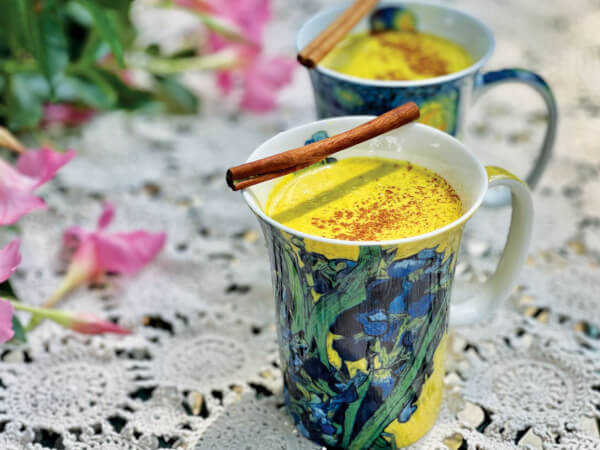 In the Caribbean we do not have the opportunity to celebrate the turning of the leaves, but we can enjoy some satisfying fall bounty supper. Guests often like to be involved, so ask them to bring a snack, dessert, or something that they might like to share. Below are a couple of drink recipes, along with a side dish. This can be served with your favorite protein dish. Remember to set the table accordingly – with maybe a burlap runner on an autumn-colored tablecloth, small votive candles, and play seasonal music!

In a small saucepan over medium heat, add coconut milk, almond milk, coconut oil, cardamom, ginger, nutmeg, pepper, cinnamon, and turmeric. Whisk together and bring all to a boil. Reduce heat to low and simmer for about 3 minutes to reduce the mixture a little, add honey, stirring occasionally. Pour into 2 warmed mugs, then sprinkle with ground cinnamon or add a cinnamon stick!

Preheat the oven to 350ºF. On a small rimmed baking sheet, place the cloves, cinnamon sticks, and cardamom pods. Toast in the oven until the spices become fragrant, 8 – 10 minutes, then transfer to a large saucepan. Add the ginger and apple cider to the saucepan and bring to a boil over medium-high heat. Reduce heat to medium-low, cover and simmer, stir occasionally, until the apple cider is infused with the spices and ginger, about 3 hours. Ladle the cider into mugs. Add honey to taste. Adults, please feel free to add your favorite liquor.

In a large bowl, whisk together the vinegar, mustard, celery seeds, salt and pepper, to taste. While whisking, slowly drizzle in the olive oil and whisk until emulsified. Set aside.

Remove out leaves from Brussels sprouts and slice thinly by hand, mandoline or a food processor. Place sprouts in a large attractive serving bowl. Add the chestnuts, celery, and apple.

Pour half the dressing over the Brussels sprouts mixture and toss. Taste and season with more dressing, salt and pepper where necessary. Cover the slaw and let it sit at room temperature, for at least 30 minutes to let the flavors blend.