If you want to see birds, from fast-flitting hummingbirds to tropical favorites such as parrots and toucans, then head south. Internationally read Reader’s Digest magazine named the Caribbean islands of Trinidad & Tobago, Dominica, St. Maarten/St. Martin and Aruba among the best tropical destinations for bird watchers. These islands are not alone. Virtually every island in the Caribbean boasts an ideal spot to bird watch. Here are our 10-Top Spots to Bird Watch in the Caribbean: 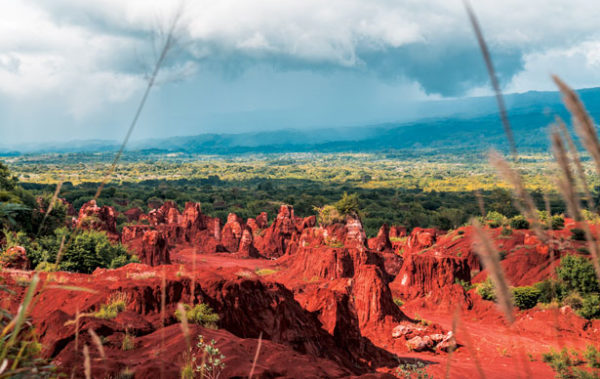 Hiking on marked trails through this mountainous park, part of the Jaragua-Bahoruco-Enriquillo UNESCO Biosphere Reserve, is the best way to see over 100 bird species. These include the endangered Hispaniolan parrot, Antillean Piculet, La Selle Thrush, Eastern Chat-Tanager and White-winged Crossbill. The park is 140 miles west of Santo Domingo. www.godominicanrepublic.com

Smooth billed Ani, Scaly-naped Pigeons and Green Throated Carib hummingbirds are a few of the nearly 150 bird species to see in this park, which occupies approximately 60 percent of the island. Of the over 20 hiking trails, those at Reef Bay, Salt Pond Bay and Francis Bay are best for birding. Additionally, VINP rangers lead a ‘Discover Bird Watching Hike’ at Francis Bay every Friday starting at 7:30 a.m. www.nps.gov/viis/index.htm

See flocks of the tall, spindly-legged, pink feathered Caribbean Flamingo on the flattest and eastern-most of the BVIs. A fixture from the early 1800’s, a market for the bird’s edible flesh and fashionable feathers almost made them extinct. Officials re-introduced the bird in the early 1990’s and today it’s possible to see them via binoculars or the naked eye from the roadway or water. Billionaire UK businessman Richard Branson, who owns neighboring Necker and Mosquito islands, have helped flamingos thrive by introducing them to these islands too. www.bvitourism.com/anegada 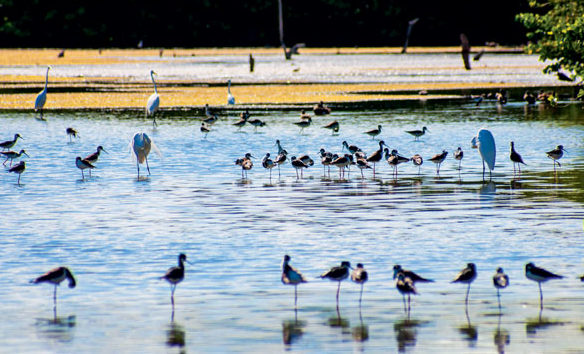 This large wetland area, located between Orient Bay and Le Galion, is made up of a large salt pond and several smaller ones. Year-round residents include egrets, herons and black-necked stilts, while migratory shorebird species include whimbrels, willets, sandpipers and plovers. In the surrounding mangroves, there are also yellow warblers, Caribbean elaenias and mangrove cuckoos. Nearby, the Amuseum Naturalis is a good place to learn about local birds. It reopens for the season in October and is open Tuesday-Saturday, 9 a.m.-Noon. www.lesfruitsdemer.com

Antigua’s sister island is only 61 square miles in size, but its home to the largest frigate bird colony in the Western Hemisphere. See many of these black feathered critters via a tour of the Codrington Lagoon National Park aboard small power boats with a licensed guides that depart from the Codrington pier. The males especially, with their bright red throat pouches, stand out amazingly from the dense green of the mangroves in which they roost. Mating season, from September to April, is the best time to visit. www.environment.gov.ag/parks-protected-areas#Codrington-Lagoon-National-Park 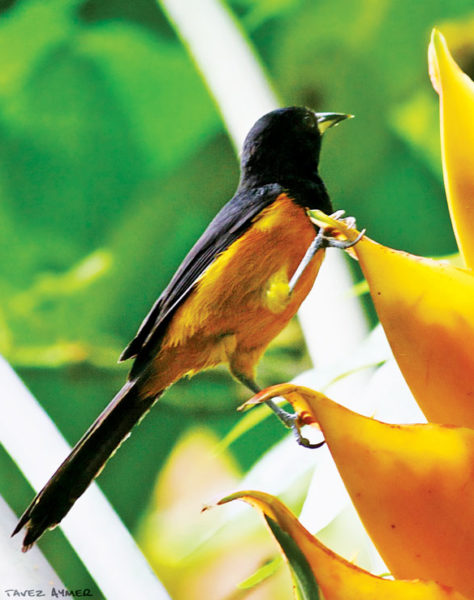 These plus Centre Hills are the best place to spot the island’s national bird: the Montserrat Oriel. It’s certainly a bird to see since between hurricanes and volcanic eruptions its population has dwindled to a scant 500 to 800. Look for a medium-sized bird; males are black and yellow in color, while females and young males are yellowish green. Other rare bird species in the Centre Hills area are the Montserrat Galliwasp, the Forest Thrush and Yellow-shouldered Bat. www.visitmontserrat.com

The rainforest around these two parks, and the mile-long Syndicate Nature Trail and Parrot Preserve on the western slopes of Morne Diablotin, are the best places to see Dominica’s national bird: the Sisserou Parrot. Also known as Amazona imperialis, this somewhat scarce parrot is recognizable by its vibrant green back and wings and red streak on its wingtips. There are over 170 other bird species to see here too. discoverdominica.com/en/places/163/syndicate-nature-trail-and-parrot-preserve 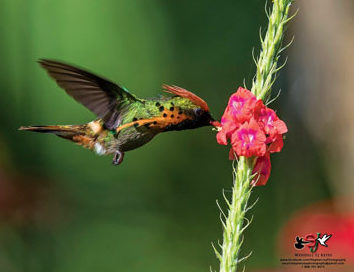 Located in Trinidad’s Northern Range mountains at 1,200 feet elevation and seven miles from the town of Arima, this non-profit, world-class natural history destination is home to some 400 birds including Squirrel Cuckoos, Tufted Coquettes and a very special breeding colony of the nocturnal Oilbird. Take a 1.5-hour tour, either at 10:30 a.m. or 1:30 p.m., with a professional naturalist guide. There’s a restaurant on site. Bring a bathing suit for a dip in the waterfall-fed Clearwater Pool. Asawright.org

Boats, many of which are glass-bottomed, depart regularly from the dock in Speyside, Tobago, to this 450-acre uninhabited island. Over a century ago, British publisher and politician, Sir William Ingram, bought the island and brought in a colony of Birds of Paradise from New Guinea to protect them from the plume trade. Unfortunately, they were wiped out in a hurricane in the 1960s. Today, more than 50 bird species, including Audubon’s Shearwater, Brown Boobies and Red-billed Tropicbirds either live or next here. www.discover-tt.com/tobago/littletobago.html 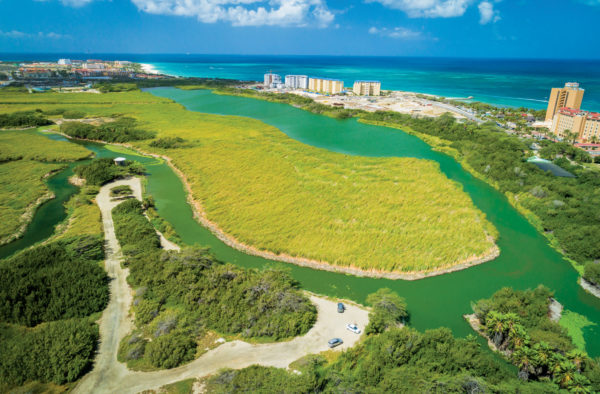 Climb to the top of the 16-foot high observation tower to see more than 80 species of migratory birds. These include Caribbean Coot, Common Moorhen, Pied-billed Grebe, Blue-winged Teal, Purple Gallinule and more. This birds-eye viewing spot, which overlooks both resting and breeding areas, is 6 miles north of Oranjestad, off a dirt road across from the Old Dutch Windmill near the Divi Aruba Phoenix Beach Resort. www.arubabirds.com/aboutbirds/bubalibirdsanctuary.htm

Since I grew up aboard, it was always a given that someday I’d circumnavigate—but there was ‘many a slip between the cup and lip’ as they say.