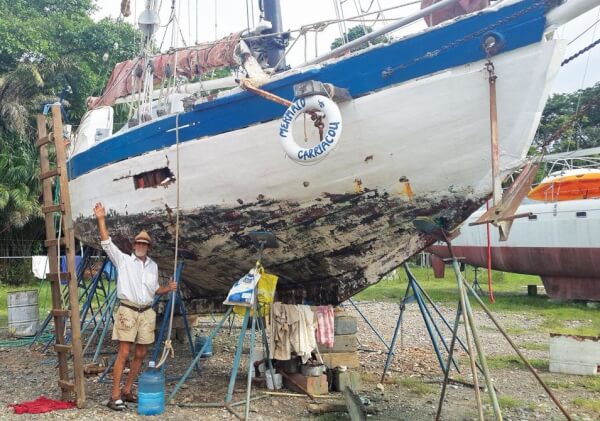 After emptying several bottles of compressed air, and spending several hours below the boat blowing bubbles and applying underwater goo to the affected seams, the leak had slowed but not stopped. I should not have sailed onto a shoal at five knots but with the help of local fishermen we get her off and so here I am surrounded by houses on the hills and bayside, feeling as if Mermaid is some exotic goldfish. But it’s all friendly helping hands and smiling uniformed children passing by in floating school buses.

The wind continues strong from the ESE and sailing out of  the small cut in the reef through which I entered before grounding is impossible, so I bide my time until I can arrange a tow. My criteria has remained unchanged: Find a boatyard. Most discomforting for this Carriacou sailor is that the majority of experts in the commercial fishing fleet think that I should sheathe the hull in fiberglass. Good grief … am I so far from home?

It has often proven true when cruising along the Central American coast that whenever I needed a hand, a tow, a shipwright or a sailor, that hand comes from an English speaking black West Indian, and, ironically, many have the surname Smith. The owner and captain of a Roatan shrimper approached me when he learned I was an American, saying he had a story to tell me about a Connecticut Yankee, a sailing Captain named John Smith, from New Haven, Connecticut, who died in 1832 and was buried in the local cemetery! He didn’t know at the time that I was also Captain John Smith and was from New Haven County, and afterwards I felt safer knowing my spot in the Oak Ridge cemetery was already taken.

After arranging a tow through the reefs, I was underway solo once again for the port of La Ceiba. The barometer was steady at 1016 with a gentle SE breeze. With double reefs and twin headsails pushing us along at four knots; I kept the pumping down to only 15-minutes an hour. I sailed to within 500 yards of the breakwater, where I was becalmed and immediately swept east with the inshore current, so dropped the hook and made a pot of tea. I was in awe at the proximity and beauty of the coastal mountains. I could see waterfalls on Pico Bonito. Meanwhile my Belizean shipwright friend Richard Jones had arranged a tow and within two hours Mermaid was hanging in straps.

I wandered the yard a bit and immediately got bitten on my foot by an unknown spider, a wound that bothered me for over four months. Amazing how crippling a small wound can be and equally amazing is how much of the Mermaid I took apart and then put back together in the ensuing seven months on the ‘hard’. This was the boat’s longest stay on land for almost 40 years. It felt like my gills were silting over. I have been in a lot of boatyards but never for so long or in one so remote. The city of La Ceiba is several miles away but certainly worth the trouble to visit. Known as the ‘Party Town’ of Honduras, it was founded by the Olancho Oligarchy who to this day wield quite a bit of influence on the city and its traditions. This city, as probably all in Honduras, has a very cavalier attitude towards both traffic and waste disposal, a kind of anarchy reigns along the highways. Centrally located are the two street markets, hotels, a bustling commercial center and the ubiquitous ‘mega malls’.

I never feel threatened while in Honduras, but I do not go out at night and would rather be swimming than go to the disco or pub. What is difficult here is finding a good cup of coffee. That may seem odd but one must remember that coffee, unlike cocoa, is not an American product. Coffee originally came from Ethiopia and was adapted and toasted and made into a beverage by the Arabs who brought it to Spain in the 7th century. At that time the Arabs drank so much of the beverage that it was labeled ‘that hellish black brew’ by the Church, until Pope Clement III developed a taste for it and made coffee a Christian beverage by decree. Ironically, coffee was introduced into North America at Jamestown in 1607, by another Captain John Smith. It was from within the ‘Green Dragon Coffee House’ in Boston that the Boston Tea Party was planned and coffee was soon thereafter named the national drink by the first continental congress. Meanwhile here on the coast of Honduras, a cup of coffee is hard to find.

If you need to haul your vessel in Honduras there are only two options: La Ceiba or at the military Base in Puerto Cortes. There is a facility in Roatan but the prices are high and it seems management would rather not be bothered by yachts. Except for a few small inconveniences, this has been a good haul out albeit an enduring one. La Ceiba provides all the material and entertainment a sailor might need. In less than a half hours drive from the boatyard there’s an incredible rainforest of unimaginable beauty with some world-class river rafting. It’s all beautiful but very run down. The best part is the welcome given to those who attempt to practice the local language. My Spanish is not at all perfect, I speak it with an accent, but to these folks that means that I am bilingual and there is no cause for embarrassment—very different to my time struggling with French. When you walk the street here and greet someone in your halting Spanish, you will invariably receive a greeting in return.  Just don’t be surprised by all the Smiths.