As the old saying goes: “one man’s trash is another man’s treasure” and for artist and sculptor Bobby Little, recycling discarded materials into art has literally become a larger than life mission.

For nearly a quarter of a century, Little has built a cottage industry around dead coral, trashed conch shells, abandoned oil drums and discarded metal that have either been washed onto the beaches by the Antilles Current or dumped at the local landfill on tiny Rum Cay.

In 1990, Little and his family started excavating land to build a marina, and after many years of digging, found various species of coral—a solid inland reef, which had taken thousands of years to build and was now long dead. 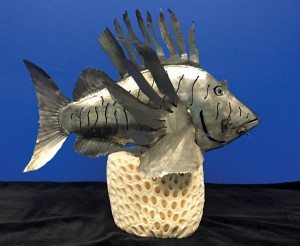 Little cut portions from the coral reef and began to refine and sculpt pieces of island art work—customized candleholders, tiles and countertops and other spirited pieces for the garden, home or institution.

More recently, Little has found a unique way to recycle conch shells into jewelry forms, shaped as marlins, sailfish, turtles and other sea life native to the Bahamas.

“There are literally four million conchs that are harvested annually, which leaves four million discarded shells,” said Little. “Each conch is worth maybe $2 to those harvesting, but I can turn that shell into $200 to $500 in sea life art.” 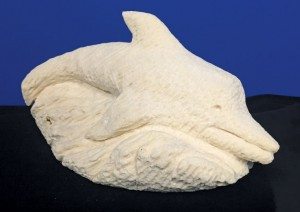 By sawing the shells into rough forms and then finishing into distinctive shapes and polishing, Little’s conch has become popular in local shops and restaurants.

“With a proper system in place, conch art becomes a cottage industry, where locals can participate and make money if not a living,” said Little, who is willing to provide raw materials and provide instruction. “Imagine, instead of selling jewelry art items in local shops that are made in China, shops can sell items made in The Bahamas or Caribbean.

The 53-year-old artist has always been a creator and craftsman. As a youngster, growing up in Hollywood, Florida, Little was grabbed by the skateboard craze. Not satisfied with just participating, he set up a workshop in his parents’ garage and began building his own skateboard brand ‘Little Skateboards’, selling 300 to 400 yearly. 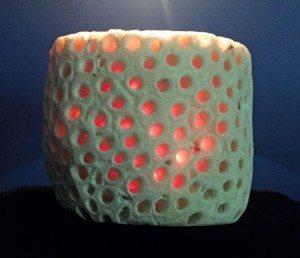 “What a ride,” he said, adding that he also formed a Little Skateboards team competing in local, regional and national events.

He was recognized this year by being inducted into the Skateboard Hall of Fame during a ceremony held in Florida.

When it came time to find a signature art-oriented theme to promote fishing tournaments at Guy Harvey Outposts in Bimini and Old Bahama Bay, fellow artist Guy Harvey and his Outpost Team needed to look no further than Little to come up with a dramatic signature statement. 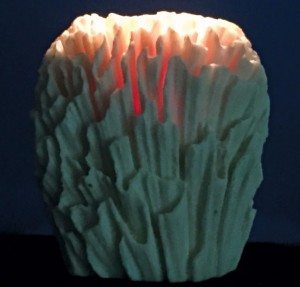 “I had seen photos of his ‘Burning Man’ sculpture which he used on Rum Cay to commemorate special events and it was singularly iconic and dramatic to say the least,” said Guy Harvey Outpost President Mark Ellert. “Bobby’s vision of creating art from recycled objects also fit our mission of promoting conservation and education.”

Ellert said eventually the Marlin and Wahoo sculptures created from metal rebar and other materials will be sunk as artificial reefs providing a new site for divers as well as hosts for new reefs and habitat for fish.

“It’s the full cycle,” said Little. “My way of showing how to imaginatively recycle and recreate.”

Gary Brownhttp://garyebrown.net
Gary E. Brown is the Editorial Director of All At Sea Caribbean. He is a presenter on Island 92, 91.9 FM, St. Maarten, and the author of the thriller/sailing adventure Caribbean High. For more information, visit: garyebrown.net
RELATED ARTICLES
Caribbean