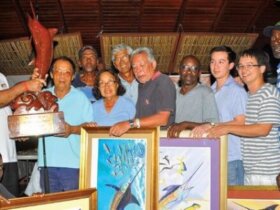 Experience paid off as local sport fishing legend, Captain Red Bailey, led the anglers and crew aboard his 44-foot custom sportfisher, Abigail III, to a top boat win at Marlin University’s final day tournament. Hosted by Marlin Magazine, a Bonnier publication based in Winter Park, Florida, out of the Scrub Island Resort, Spa & Marina in the British Virgin Islands, August 16 to 21, Marlin University is an instructional holiday that enables anglers to fish the world’s top billfishing spots and be taught by some of the best in the business. The four-day fishing trip wraps up with a one-day show-what-you-learned mini tournament. Thus, three vessels, including Bailey’s Abigail III, set out on August 20 to see who could release the most blue marlin first.

“Grander released the first marlin in the morning, then Under Dog and then us. So, by the afternoon, we were all equal on points, but we were in third place based on time,” explains Bailey, a resident of St. Thomas, U.S. Virgin Islands and member of the Virgin Islands Game Fishing Club, who has professionally charter fished the waters of the famous North Drop for nearly a half century.

Grander is a 46-foot Jarrett Bay helmed by Captain Ray Walters, while Under Dog is a 43-foot Viking run by Jerry Emanuel.

“It was the last half hour of the tournament and I was joking with Captain Ray (Grander) over the radio that we were coming for his wallet,” says Bailey, using a common saying among fishermen in tournaments with a monetary prize. “Fifteen minutes later, we hooked up and released our second marlin of the day to win on count and time.”

This isn’t Bailey’s first win in Marlin University. He’s accomplished this feat twice before. Again, experience was the key. Bailey got his start in the sport of fishing as a teenager mating for legendary Captains Johnny Harms and Tommy Gifford. Early on, in 1971, Captain Bailey landed a World Record Blue Marlin, thus starting a career in the captain’s chair of winning catches. Since then, he’s not only earned a number of top boat, top mate and top angler trophies, but spearheaded billfish conservation efforts such as catch and release and the use of single hooks. In 2016, The Billfish Foundation awarded Bailey with the prestigious Rybovich Lifetime Achievement Award. Captain Bailey’s latest win makes his one of longest operating and most successful sport fishing captains in the Virgin Islands.