El Zorro Comes Back to Life!

The famous El Zorro – the mothership on which the late St. Thomas-based sports fisherman Jim Edmiston traveled around the world in search of a 2000lb blue marlin – has come back to life thanks to a loving restoration by Trinidad & Tobago’s Didier Remacle and his wife Danielle.

“My wife and I were looking to purchase property here in Trinidad,” explains Remacle, who has enjoyed yachting for the past 30-years out of Cape Town, completed two transatlantic voyages and has restored 11 yachts during his career. “Instead, we opted to buy El Zorro, which was lying at Coral Cove Marina here in Trinidad, as our home.”

El Zorro started life as a long-range vessel used for commercial fishing in the Pacific Ocean. Edmiston, then living in California, purchased the 160 ton (100ft LOA, 28ft beam) vessel and spent two years converting her into a comfortable floating fishing lodge. Most notably he added a 31ft sports fisherman named El Zorro II on the back deck papoose-style along with a crane to launch her to fish. Edmiston cast off in 1986 on what turned out to be a four-year, 70,000-mile, 40-country trip. He didn’t catch a double grander but he did land enough incredible fishing stories that many of these tales are still talked about around the waterfronts. 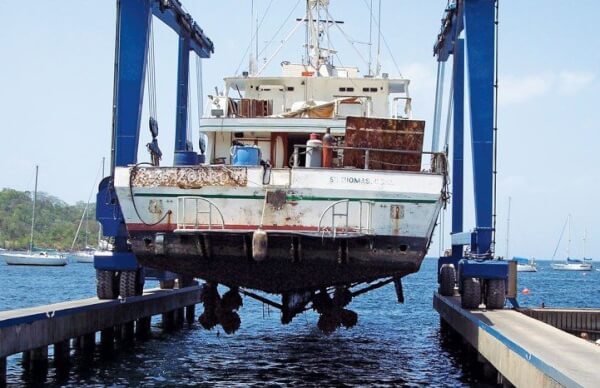 Today, El Zorro II is also enjoying a second life as the beautifully-maintained Yes Aye. She’s owned and chartered by Capt. Gary Clifford, who runs True Blue Sportfishing out of Grenada. The years since Edmiston’s big trip, however, weren’t as kind to the mothership.

“We purchased El Zorro in January 2006,” tells Remacle. “She was in very bad shape and in need of a lot of TLC. Restoring her was a true labor of love.”

Remacle hauled the yacht at Peake Yachting Services in Chaguaramas, Trinidad, and immediately set to work. He stripped off all the fiberglass from the the hull and re-glassed it with epoxy. Inside, he gutted the interior, which originally consisted of six cabins with four bunks each, and rebuilt it with four en-suite cabins and six additional port holes. The master cabin and bathroom were totally restored. He also added a beautifully rounded interior staircase that leads from the saloon to the bridge thus eliminating the need to access the bridge from the outside only. One crew cabin on the bridge was converted into a second galley, which makes the bridge area pretty much self-contained for two persons.

“I personally redid all the plumbing and waste and tiling,” Remacle explains. “We had a very gifted fiberglass and fairing guy, Leon Layne, who is responsible for her looking smooth. She was completely rewired by our electrician, Anand Laltoo. The beautiful woodwork was done by Dan Jelsema, Rob Caulfield and Anthony Wellington.”

Remacle did discover some memorabilia from El Zorro’s former life during the restoration, which included some fishing plaques and trophies. All of Edmiston’s fishing equipment had been sold to various sports fishermen in Trinidad before Remacle purchased the yacht. However, he did borrow a rod from one of these fishermen for ‘good luck’ during El Zorro’s shakedown cruise to compete in the Budget Marine Spice Island Billfish Tournament in January. The lucky rod did produce the release of one white marlin.

“We bought El Zorro with the potential for doing business such as cruise and dine and fishing charters,” Remacle explains. “Right now, we’re enjoying every minute since we moved on board on Christmas Eve.”