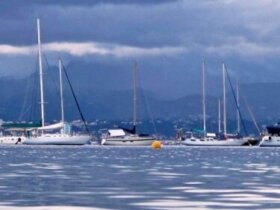 The port of Cartagena de Indias, as the city on the north coast of Colombia is officially called, has always been of great significance to the country. In pre-Columbian times the combative Carib Indians offered strong resistance to all the colonizing expeditions that tried to land on their beaches. The port, which was established by Pedro Heredia in 1553, is still one of the most important in the Americas. The city itself entered the UNESCO World Heritage List in 1984. The combination of historic city and well-equipped port makes Cartagena a particularly interesting destination for cruise ship passengers.

Cartagena is the epicenter of Colombia’s tourism industry. The fact that the city is just below the hurricane belt also contributes to its popularity. The port is located in a protective bay and features dry dock and ship repair facilities.

Approaching Cartagena by sea is an unforgettable experience. Coming from Panama we approached the bay from the south. First the Rosario Islands came into view, loved by tourists the islands boast an open water aquarium, beautiful beaches and idyllic harbors. To the north, on the Isla de Baru, we can see the mangroves of the Corales del Rosario national park. A little later, San Fernando Fort on Tierra Bomba Island slipped by to starboard and the San Jose Fort with its small lighthouse passed to port. Ahead, the skyscrapers of Boca Grande, the modern part of the city on the inner bay rose out of a shimmering mist, an imposing sight that becomes more impressive as we draw near.

Finally, the ship entered the narrow passage between Manzanillo Island and the shallows of La Virgen del Carmen, before mooring at the cruise terminal in the Manga district. We are at the center of the industrial port with its numerous marinas. The Panama Canal is only 180 nautical miles away.

The pier and the cruise terminal are located right in front of the entrance to the inner bay with a striking view of the container port. In the distance are a few naval vessels near the Cotecmar shipyard.

A free shuttle bus carried us to the terminal, which is also within easy walking distance. Our friendly bus driver was an excellent ambassador for his city.

Besides the usual souvenir stalls and coffee house, the reception area in the terminal contains a mini rainforest with many tropical animals and a waterfall. We are welcomed exuberantly by three colorful macaws, who in addition to cockatoos, small deer, black swans, white peacocks and pink flamingos, inhabit this small zoo. The whole area has a very friendly atmosphere and provides a good first impression of the cruise port, which is part of the Sociedad Portuaria Regional de Cartagena (SPRC). The company was formed in the early nineties by local investors and privatized in 1993 to take over the former inefficient state-run port. More than twenty years later, the port is widely praised and admired around the world. The company also worked hard to dispel the image of Colombia as a narco-state. The port has shown remarkable growth with container traffic estimated at 2.65 million TEU (Twenty-foot Equivalent Unit, a measure used for capacity in container transportation) in 2015. An increase of over 11% compared to 2014. With the current installed capacity of approximately 3.5 million TEU, SPRC aims to reach five million TEU this year.

The opening of the Panama Canal extension has had a positive effect on the port of Cartagena which now functions as a Caribbean hub, especially for container traffic.

The success of the SPRC in the container sector is impressive, but the company also plays an important role in the cruise ship sector. In 2014, the Cartagena Cruise Ship Terminal received 366,096 passengers and 149,256 crew on 219 cruise ships, a 3.3% increase over the previous year. The company is working with local stakeholders on a strategy to attract more international visitors. This can be seen in the improvements to Cartagena’s hotel infrastructure, the upgrading and expansion of Rafael Núñez International Airport and efforts to build new highways that, among other things, ensure that cruise passengers can reach the historic city within minutes. The old city of Cartagena is widely praised in travel books and blogs and holds countless attractions. I was particularly drawn to the magnificent statues of Simon Bolívar and Admiral José Padilla as they help determine the historical perspective of the port city.

Bolívar is depicted on his horse in Bolívar Park, in the center of the old town. The base of the statue is inscribed with Bolívar’s famous words: If Caracas gave me life, Cartagena gave me glory. Bolívar is known in South America as ‘El Libertador’ for his attempts to liberate the colonies from Spanish domination. The independence movement in Colombia started in 1810, but did not succeed until 1819 when Bolívar incorporated Colombia into the confederation of Gran Colombia. Gran Colombia also included Ecuador, Venezuela and Panama.

A statue of Colombia’s greatest naval hero, Admiral José Padilla, stands on a square near the Maritime Museum of Cartagena. Padilla supported the people of Cartagena in 1811 in their search for independence. In 1815 he served under Simón Bolívar and in 1823 he overcame Spanish troops at the Battle of Maracaibo during the war for Venezuela’s independence. The admiral made an important contribution to the independence of Colombia, Venezuela, Ecuador and Peru and was the founder of the Colombian Navy. Bronze plaques on the base of his statue describe his impressive career and how he contributed to what Cartagena is today.

Els Kroon is an award winning freelance photojournalist and former teacher. She lives and works in Curaçao and Kissimmee, Florida.

The Dominican Republic in the last few years has more than doubled its number of full-service marinas. There are so many reasons to visit!

There are no fancy clubs, casinos or even marinas on Nevis. But that’s not why we visited this 36-square mile Leeward Island linked to St. Kitts