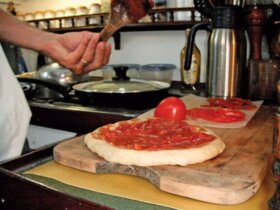 The Challenges and Joys of Cooking at Sea

The yacht cruising world has discovered Cartagena de Indias, Colombia.
This beautiful historic city, its friendly people, and its yacht facilities have become a desirable cruising port-of-call in the Caribbean. The most noticeable calling card is the tranquil lifestyle of the cosmopolitan people and the safe cruising record in Colombian waters. Some informed yachts now skirt the troubled waters of Venezuela to utilize these amenities. To further safe cruising, the Colombian Coast Guard (Guardacostas) is conducting a personal allegiance with the boats visiting Colombian waters.

Although the Colombia coast is as safe as any in the Caribbean or North America, excluding Venezuela, the Colombian Guardacosta is striving to implement a friendly presence whereby foreign cruising vessels can be assured of the concern and professional effort being conducted on their behalf by the Colombian government.

The Port Captain’s Office of Cartagena and the Colombia Coast Guard indicate that they will provide all support possible for boats (while visiting Colombia) along this route.  The Port Captain’s office suggests that cruising yachts departing or cruising in Colombian waters file a voluntary float plan (by e-mail, or when getting your zarpe) indicating your intended itinerary from Cartagena. (Those boats leaving the ABC’s or elsewhere headed for Colombian waters may do so as well, to the same address.) This may be filed at [email protected].

Shortly there will be available an e- mail format in English and Spanish which may be filled out and sent in. It can be updated en route by those that have e-mail aboard.

The Coast Guard asks that you help them provide better support by:
1. Filing a float plan or itinerary
2. Reporting your departure upon getting your anchor up, via channel 16 VHF (see below).
3. Reporting any suspicious activity anywhere along the route.

Procedure for reporting departure (#2 above):
Call for “Guardacostas” (“Goo-Ahrdah-KOSE-Tah”)on Channel 16;
They will answer and ask you to change channel, normally to Channel 14 (Kah-TORE-Say);  (Note: Let’s hope the Guardacosta does monitor Channel 16, 24/7 religiously. The first time someone calls and no one answers, the entire system goes to nil).
Indicate the name of your vessel, your current position, and which way you plan to exit the Bay of Cartagena (BocaChica or BocaGrande).  (Soon there will be available a text of what you will be asked so that you can be prepared for the sequence of information requested.)

Procedure for reporting suspicious activity (#3 above):
At any time you may call on Channel 16. Between Cartagena and Panama there are Coast Guard stations at Islas del Rosario, Coveñas (which covers both Islas San Bernardo and Isla Fuerte), and in Turbo (which covers Zapsurro Bay). There are gaps in the coverage of VHF along the coast, although the fixed stations are supplemented by Coast Guard units that are constantly on patrol.

The Port Captaincy and Coast Guard officials have expressed in the strongest terms their hopes that you have a pleasant experience in Cartagena and along the Colombian coast. Without wanting to restrict your movements, they ask that you keep them informed of where you are and where you are headed so that they can make sure that they are prepared to provide support.

If you just want to contact a civilian and local sailing ex-pat you may write Lee Miles at [email protected] or visit www.DestinationCartagena.com