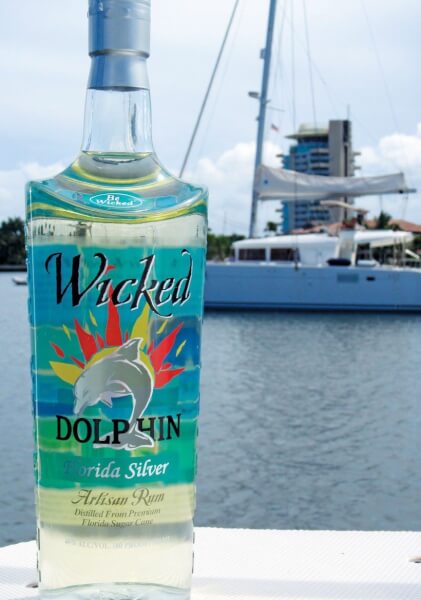 We love when people suggest a rum for us to try; even better when they bring us a bottle of rum to try. Our friends had recently toured the Wicked Dolphin Distillery in Cape Coral, Florida. Knowing we enjoy a good rum drink now and then (wink, wink), they brought us a bottle of Wicked Dolphin Silver to test.

The family-run distillery started in 2012, using 100% pure Florida cane sugar harvested just 30 minutes from the distillery, along with other local ingredients. Handcrafted in small batches in a copper pot still, Silver is then barrel aged in Kentucky Bourbon barrels. Wicked Dolphin Silver has won many awards around the world including the 2013 Rum XP Gold Award at the Miami Rum Festival.

Though Wicked Dolphin Silver is clearly a mixing rum, we began our test neat to define the true character of the rum. From there we picked the cocktail in which we thought the rum would shine. It was clear we were on opposite ends of the spectrum.

He Said: For a silver rum this has a sweet nose but that is where the sweetness ends. The rum doesn’t have a lot of character to discover. I’m not saying it was bad but definitely a mixer not a sipper.

I choose the Cuba Libre hoping the lack of sweetness in the rum would balance out the sweetness of the Coke. The Wicked Dolphin actually let the lime in the cocktail shine creating a unique taste that I quite enjoyed.

She Said: Wow, what a sweet nose. It reminds me of Butter Rum Lifesavers. I disagree with Clint about the sweetness. While I quickly lost the butter rum on the tongue, for me the taste is pure cane sugar. A big however, when I let the rum linger on the tongue it turned bitter and burned my sinuses.

The cocktail I picked was a Mojito, believing the buttery rum would balance out the lime and mint. Boy was I wrong. Sip after sip I kept asking Clint what he forgot to put in the drink. I was left extremely unsatisfied with the Mojito and almost dumped it down the drain. That would have been alcohol abuse. I followed with a Mojito made with Caribbean rum. Ahhhh.

Overall: For the first time in quite a while we definitely did not agree on much about a rum. What we did appreciate was the use of locally sourced cane sugar. Although the Silver didn’t suit our taste buds it might be worth trying their Spiced, Coconut and RumShine in the future. Who’s buying?