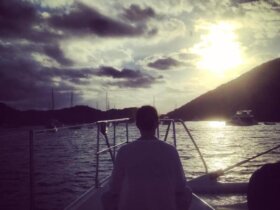 “Good Morning!” From Someone Who Used to Loathe Mornings

“We predict the marlin bite will really turn on as we get closer to the full moon on August 29th,” says tournament director, Jimmy Loveland, who describes MarlinFest is a week of fun activities planned around the ABMT.

New this year is the World Wide August Moon Marlin Raffle. Anyone around the globe can log on to www.abmt.vi/pages/marlinfest_raffle.htm to purchase raffle tickets. Prizes include a full-day fishing trip aboard the 62’ Bayliss, Uno Mas, in Los Suenos, Costa Rica. There are tons of other cool prizes. Raffle monies, like proceeds from other MarlinFest activities benefit the Marine Vocational Program (MVP), which gives young Virgin Islanders the skills they need for careers in the marine industry.

ABMT events kick-off on Sunday August 23rd when the tournament’s ‘Board of Captains’ inducts Capt. Brad Simonds into its ‘Hall of Fame’ at a party on IGY’s American Yacht Harbor (AYH) Marina’s Marlin Deck.

On August 24th, the tournament’s Observers arrive eager to witness each fisherman’s release. This is followed by the traditional ‘Woo Woo’ Party at XO, which honors the memory of late angler, Russ Hensley, of Beastmaster fame.

ABMT fun continues on August 25th with a Kick-Off Party at the Marlin Tent at AYH.

The next day, August 26th, ABMT fishing starts right after the Boy Scout Flag Raising Ceremony and Blessing of the Fleet at 6:30 a.m. at the AYH flagpole. Newly minted Eagle Scout, Marcus Norkaitis, will sing the national anthem, while Rev. Jeffrey Neevel, of the St. Thomas Reformed Church, will Bless the Fleet.

Anglers, captains and crews competing will set their sights on catching and releasing the most blue marlin. The public can catch the spirit of the sport by walking the docks and watching the big rigs come in around 6:30 p.m. and counting the number of marlin release flags flying from the outriggers. Anglers in this conservation-oriented tournament have not boated a blue marlin since 1986. The more flags, the more marlin the boat released under the practiced eye of the Observers. The winner is the one who releases the most blue marlin first. At 7:30 p.m., the contestants are invited to ‘Out Back Night’ under the Marlin Tent at AYH with a feast of brisket, ribs, chicken and all the trimmings.

Meanwhile, MarlinFesters both local and visitors can cast off on the ‘BVI Blast’, a 7-hour powerboat excursion to four neighboring British Virgin Islands (swimming, beaching and snorkeling) with lunch at Foxy’s Bar and Restaurant on Jost Van Dyke.

The next day, August 28th, ABMT fishing continues while the MarlinFest ‘Wet N’ Wild’ two-day Center Console ‘All Billfish, Wahoo and Yellowfin Tuna’ tournament kicks-off.
This event is for those anglers who enjoy big game fishing on standup tackle.

On Saturday August 29th, it’s a lay-day for the ABMT, second and final day of the ‘Wet N’ Wild’ Center Console tournament and a whole day of MarlinFest activities for the public. The Red Hook ‘Jump Up’, which takes place roadside in the AYH parking lot, starts with an Arts & Crafts and West Indian Food Fair from 11 a.m. to 8 p.m. Tournament T-shirts with beautiful original art by marine artist Jason Mathias, will be for sale. Restaurants compete at the Chowder Challenge from 3 p.m. to 8 p.m. The ‘Best of the Fest’ restaurant winner pockets $1,000 cash. Judges of the Chowder Challenge include the Food Network’s Extreme Chef star, Terry French. The evening caps off with a Caribbean-style ‘Jump Up’ show featuring costumed stilt-walking Mocko Jumbies and limbo dancers starting at 8:30 pm.

Meanwhile, competition continues on land at the MarlinFest Golf Tournament. Designed by world-renowned architects George and Tom Fazio, the 6000 yard, Par 70 Mahogany Run Golf Course attracts thousands of visitors each year including celebrities and Presidents alike. There’s a shotgun start at 9 a.m. The winner earns a transferable free entry into the 2016 ABMT, a $5000 value.

The ABMT’s final fishing action concludes on Sunday August 30th. The Awards Ceremony takes place later under the Marlin Tent at AYH along with the naming of the 2015 USVI Open/Atlantic Blue Marlin Top Angler, who pockets a $10,000 cash prize.

Started by Chuck Senf back in 1972, the ABMT has evolved into one of the most competitive saltwater sports fishing events in the world or the ‘Super Bowl of Sports Fishing’. The ABMT is fished under International Game Fishing Association (IGFA) rules, and is overseen by a professional ‘Board of Captains’ and well-qualified judges.

The ABMT continues its 43 year tradition of benefiting the Boy Scouts of the Virgin Islands. MarlinFest benefits the MVP, which is a locally-registered not-for-profit.

The Moorings Opens Newest Charter Base in St. Thomas, USVI

The Moorings, known as the world’s premier yacht charter company, opens its newest base at IGY’s Yacht Haven Grande in March