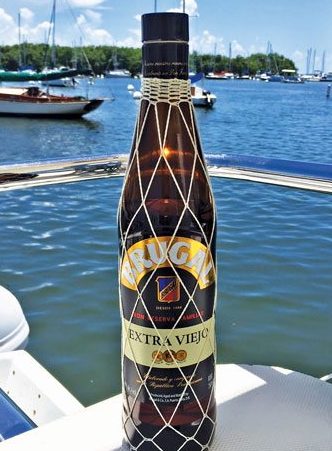 Looking back at our recent sampling, we noticed we’ve spent a lot of time sampling rums from the southern Caribbean. It’s time to head back north to the Dominican Republic where it is said Christopher Columbus’ first companion to Hispaniola, Don Diego Bermúdez, brought sugar cane with him to extract alcohol. Today Brugal, one of the 3 B’s of rum producers in the DR, crafts rums using a closely guarded family recipe handed down through five generations.

In 1888, Don Andrés Brugal Montaner founded Brugal & Company in Puerto Plata along the northern Atlantic coast of Dominican Republic. His core values of “Passion, Dedication and Hard Work” are at the heart of the company 130 years later. With such a top secret recipe, only family members can become Maestro Ronero. Currently Master Blenders Jassil Villanueva Quintana (the family’s first female Maestro Ronero) and Gustavo Ortega Zeller use the latest innovation in rum production while preserving the tradition of the rum.

In 1976, Brugal – Extra Viejo became the first premium rum to be produced in the Dominican Republic. The recipe begins with local sugar cane, crushed to create a sweet molasses. The mash is then double distilled to remove the heavy alcohols. The Maestro Ronero selects only the purest spirits to be aged up to eight years in oak casks. The aging warehouses are positioned north to south, making the most of the Dominican sunshine to intensify the aging process.

This rum has a very mild nose. It takes a deep inhale to pick up on subtle hints of berry and fresh cut oak. The initial sip reveals something completely different. Here I get coconut, vanilla and dark cherry with no wood undertones. The hints of berry from the nose come through as I continue to sip but the oak is never revealed. The finish is smooth with a lingering spice which warms rather than burns the throat. Adding an ice cube doesn’t open more notes, however it does eliminate the spice on the throat.

In the glass the rum has a beautiful amber hue with great lacing. The nose is very subtle with vanilla and sherry notes. On the palate the liquid is heavy, almost syrupy, coating the tongue with cherry, sherry and vanilla notes. The finish surprises me. It tastes like a Toasted Coconut Good Humor Ice Cream Bar. I get both the creaminess of the ice cream and the toasted coconut. The final note is a hint of cinnamon which soothes the throat.

We are split on the rum.  Clint believes it lacks a “hook” to keep him interested as a go-to sipping rum, while Terry enjoys the surprise of toasted coconut. We would serve Brugal to our friends as a part of a rum sampling to showcase the different styles of rums.