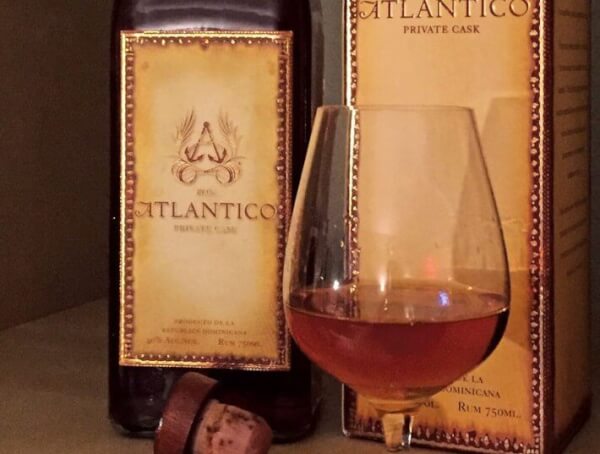 What do you give rum reviewers for Christmas? Rum, of course. We are very fortunate our friends also have refined palates for sipping rums. When we opened Atlantico Private Cask we immediately wanted to share with those gathered, however, after a Christmas dinner filled with all our favorites, none of us could think about putting another ounce in our bodies.

Atlantico Private Cask Rum is produced by Dominican Republic independent bottler Oliver and Oliver for Atlantico Rum. Oliver and Oliver buys barreled rum from major rum producers, then ages using the Solera method. We discussed this process when we reviewed Matusalem Gran Reserva Solera 15. Think of it as a pyramid blending process. As aged rum is pulled for bottling from the lowest Solera barrel the volume is replaced by the younger rums above. Oliver and Oliver uses this blending of old and new to produce a specific flavor profile provided by the Atlantic team.

Knowing Enrique Iglesias co-owned Atlantico did raise our eyebrows just a bit, but once the rum was poured, the inviting color sucked us in. 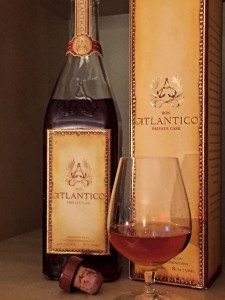 He Said
Immediately I get a nice charred oak on the nose giving me great expectations on the palate. There is a slightly sweet note but, for me, the charred oak is dominant. Though I lose the oak on the palate it is replaced with pleasant mellow notes of caramel and vanilla and the oak is now replaced with a hint of spice. The spice is extremely subtle and hard for me to pinpoint. It’s almost an afterthought. I’m enjoying lingering over the notes and the warming sensation the spice produces in the throat. I don’t need to think too much about this rum, just enjoy.

She Said
I have to say I really like the rich, bronze color of this rum. The rum coats the glass as a fine sipping rum should. My nose goes right to the caramel and hint of vanilla with a spice my nose is not immediately identifying. The taste confirms the caramel and vanilla while presenting the spice as tobacco. I continue sipping to discover more depth, however there was none to be found. For a blended rum which has won multiple awards I’m actually disappointed there is not more here.

Overall
At a cost of $36/bottle Atlantico Private Cask has some character even a beginner rum drinker could discern, enjoy and appreciate. Though our friends with a more refined palate would enjoy this rum, it is not one on which to spend an evening debating nuances.

Rating: 3 out of 5
Sipping Rum Scale
1 – An expensive mixer
2 – A quick celebratory shot
3 – Wouldn’t be embarrassed to share with friends
4 – Are my friends worthy of a sip
5 – Special moments rum

Give the Gift of Rum – The Gift that Keeps on Giving