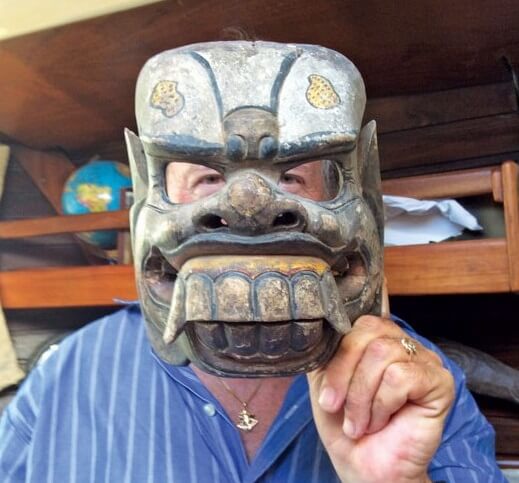 My wife and I live a life of splendid isolation aboard our 43-foot ketch Ganesh—a cruising life so wonderful I totally forgot how awful penny-pinching dirt dwellers can be. Stupidly, I invited an old acquaintance, Tony Chutzpah of Fort Liquordale, to cruise Bali with us. There was only one stipulation: He had to pay for his food. We’d pay for everything else. All he had to do was pay for what he ate and drank. He agreed and asked for a ‘tiny’ favor: To bring a ditzy blond woman he wanted to romance. I should have said no. I knew I should have said no. Instead I said yes. I felt my wife and I were getting too insular, too out of touch with our American culture—that we needed a crash course in Yankee Doodle Dandyism.

Upon their arrival in Denpasar, Bali, we whisked them off to a large bustling grocery store—where Tony carefully selected nine dollars’ worth of cookies. That’s right: Nine dollars for two people for a week.

“Wait,” I say, pointing to the nearly empty grocery cart. “In seven days of storeless out-island coastal cruising; you and Betty Boobs will eat 42 meals, right? Plus mid-morning snacks and happy hour …”

“Too much food, too many cookies?” asks Tony innocently. “You think we should put some back?”

“We don’t eat much while on vacation,” Betty Boobs says breezily. “We’re like birds!”

“And I never drink fluids,” adds Tony. “They bloat me.”

Now, under normal circumstances, I’d never allow someone to step aboard my yacht with nine dollars’ worth of food and a one-week agenda. But, as I pointed out, I wanted to immerse myself in my cultural roots. So I meekly grinned, and the next thing you know, we are out to sea.

Tony is napping near the loo’ward jib sheet. I attempt to quietly get the boat under sail, which appears to disturb his slumber. Finally, he awakes—none too happy.

He does—for about ten seconds. “Wow!” he says with a wide, happy grin, “I had no idea how physically exhausting sailing would be—what’s for dinner? When is happy hour? I could eat a horse.”

Actually, he could eat two horses easily, and still have room for triple desserts.

At first I thought Tony was joking. But he somehow managed to keep shoveling in food and talking at the same time. “Delicious, Carolyn! My compliments to the Chef! Yeah, I’ll have some more and more and more of your delicious grub—of course!”

Betty Boobs is no slouch either. “Another soda water, please. I need something to cut the chemical taste of those Diet Cokes, and the coconut waters didn’t do it! Gosh, I had no idea it would be, like, hot in the tropics. I could easily drink Lake Okeechobee. Thank gosh I spied a bilge full of bottles and cans and jars. Good thinking! We gotta hydrate, right? I mean, this is a medical necessity, correct?”

“The wind sure makes a lot of racket in your rigging wires,” says Tony. “Is there any way to turn it off?”

“I can check with the Gods,” I say lamely, “but they don’t seem to being treating me kindly lately.”

“And you’re not really serious about the electrical rationing, are you?” asked Betty Boobs. “I mean, this is the cyber age, right? And is not the sun free? I see those panels atop the Bimini—you can’t fool me, Fatty. You’re pulling our leg, ain’t you? So your whole one-cabin-light-at-a-time spiel was a joke, am I right? Huh? Okay! There! I knew it! I TOLD you, Tony!”

“Are you aware that the boat is, like, rocking?” asked Betty. “Is that normal?”

Now, I’m sure, dear reader that this is not how they appeared to be behaving in their own eyes. I’m positive that they were perplexed by my amazing stinginess, my water conservation obsession, and my goofy electrical hoarding.

“But I was going to go back in there,” huffed Betty after I discovered the forward head was ablaze with lights and whirling fans—for hours. “What’s a little momentary distraction among friends?”

Funny how people you barely know are the first to play the friend card, isn’t it?

I also noticed the little stash of cookies they’d purchased wasn’t being shared—but rather hoarded in their luggage for private, furtive consumption.

By mid-cruise I couldn’t take it anymore. During a long meaty lunch washed down with many bottles of expensive, heavy fluids I asked them how—in heaven’s name—they thought they could do a week on the equator on nine dollars’ worth of food and two cans of Diet Coke.

“… and the air temperature is considerably different here,” chimed in Tony with a mouthful. “Who knew?”

Finally, the cruise was over. I didn’t punch any bulkheads—leastwise, anywhere they could see me doing so. I anchored right in front of a huge grocery store. Now that they’d seen the light—they could replace all the food and fluids consumed.

“What’s that building there?” Tony asked, pointing a little down the shore.

“That’s a restaurant,” I said. “A few of them along the shore are tourist traps and pricey by local standards—about ten bucks each for a full course dinner. But a number of them are cheap—$3 bucks will buy a delicious meal.”

My wife Carolyn came out on deck and sat down expectantly. She’d just cooked meal after meal without complaint. She grinned. Finally, I could see her thinking.

My wife’s face fell. She slid soundless back below decks to continue her dishwashing—and has never been quite the same since. After our guests left, I asked her how she liked chartering sans payment.

“I always thought it would be awful, thankless, and excoriatingly painful,” Carolyn said, “But it is far, far worse than that!”

Editor’s note: Fatty and Carolyn are currently in therapy somewhere in Southeast Asia.

Cap’n Fatty Goodlander has lived aboard for 53 of his 60 years. He and Carolyn are currently on their third circumnavigation. Fatty is the author of Chasing the Horizon and numerous other marine books. His latest, Creative Anchoring is out now. Visit: fattygoodlander.com