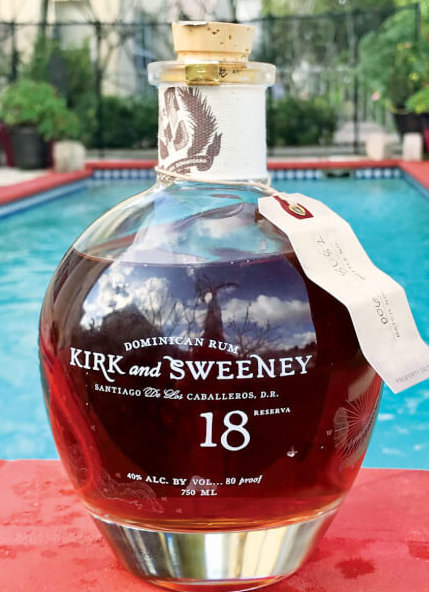 One of Terry’s favorite rums is Kirk and Sweeney 12 year old. The buttery nose, vibrant palate and an amazing finish provide her comfort after a stressful day. It’s no wonder there’s not a drop of the rum in the house. Seeing the 18 year old on the shelf, we’re curious if six more years of aging (and 20 more dollars) makes a difference in overall taste and experience.

The name Kirk and Sweeney pays homage to a rum-running schooner seized by the US Coast Guard in 1924 off the coast of Long Island, New York carrying 867 cases of rum. The Coast Guard “tag” on the bottle wants you to believe the rum was somehow connected to that shipment.

The rum is produced in the Dominican Republic by J. Armando Bermudez and Company for 3 Badge Beverage Corporation in Sonoma, CA. Bermudez, part of the three Bs of rum in the DR, dates back to 1852, and is among the largest rum distillers on the island. 3 Badge Beverage has a rich history in wine making and is currently owned and run by fourth generation vintner August Sebastiani.

Kirk and Sweeney is made from blackstrap molasses, a byproduct of sugar refining. Blackstrap starts from sugarcane juice which is boiled to create cane syrup. A second boil creates molasses, then a third boil creates blackstrap molasses. Once distilled the rum is aged in American oak barrels. The 23 year old consists of at least 51% rum aged at least 23 years with the remaining 49% being a mix of rums whose average age is 23 years old.

The 12 year old had a buttery nose with notes of vanilla, almond and caramel. Those notes skipped the palate and headed right for the finish which warmed the soul and invited you back for more. The palate eventually opened up but the finish was definitely the star of the show.

The 18 year old presents itself as soon as you uncork the bottle. The nose is somewhat sweet with hints of chocolate, coffee and butterscotch. The palate is where this rum shines. Notes of baking chocolate, apricot, tobacco and florals compete for your attention. The sweetness from the nose is gone allowing layers upon layers of flavor to come through. The finish is less exciting, with hints of oak and port wine, dissipating as soon as the liquid passes. That’s okay though, you want to get back to the palate.

At $49/bottle the Kirk and Sweeny 18 year old presents as a more complex sipping rum inviting exploration. Where the 12 year old was all about the finish, the 18 year old gives you so much on the palate that you don’t want to finish. Terry still prefers the 12 while Clint really enjoyed the 18. Both bottles will now be stocked at Casa Boram.