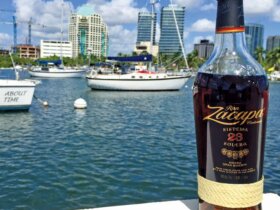 Is Ron Zacapa Truly the Benchmark?

In January 2016, we selected a rum from Plantation’s Old Reserve Collection, in which each rum hails from a different Caribbean Island. We “traveled” to the island of Barbados, where the sugar cane produced a rum layered with hints of tropical fruit. This month we decided to explore Trinidad, often known as the southernmost island in the Caribbean although it lies on the continental shelf of South America, seven miles north of Venezuela. Does the hot and humid climate with the defined rainy and dry seasons produce a better rum? It’s Barbados vs. Trinidad.

Plantation Trinidad 2001 is distilled using a column still and a short fermentation period at the Angostura Distillery, known for their fine rums and bitters. The rum is aged in bourbon casks for a minimum of nine year before being sent to France where it is finished in Cognac casks.

Plantation Barbados was aged in bourbon and sherry casks providing an extra layer to the rum, and aged for seven years instead of nine. Let’s see what difference the climate, casks and time aged makes on this artisan rum.

The nose is not powerful, but well balanced with some charred wood, a little vanilla, citrus and aniseed. It is very smooth on the palate, opening up the different notes from the nose. The charred oak is more prominent with vanilla, berry and some floral. There is also a slight coffee note as the rum begins to move from palate to throat. This is a full-bodied rum with a nice oak finish which, for me, lingers most. I like the complexity of wood, sweet and spice from start to finish.

I love the golden color with inviting lacing on the glass. The orange and honey notes hit me even before I put the glass to my nose. There’s nothing on the nose which leads me to believe there is any spice or heat on the palate. BAMM!!! There’s a burst of cinnamon as soon as it hits my palate. The sweet notes I anticipated are overpowered by the cinnamon. I tried another sip searching for the sweet note but, for me, there was none. Yet after the burst there is magically a calm to the finish. This rum lingers with me in almost a warming kind of way.

We are all over the place with this rum. Clint wanted to give a 4.5 while Terry only a 3.0, but that simply comes down to what we like in a rum. Trinidad is definitely spicier, smokier and woodier than the Barbados. Does that make it better than the fruitier, less complex Barbados?

Clint thinks so yet Terry is on the fence. We’ll give the edge to Trinidad since Clint did find some complexity.