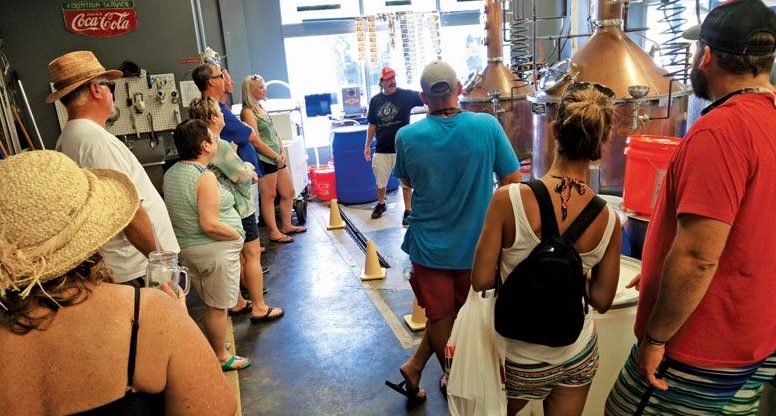 Who would’ve have thought a four-mile island needed three rum distilleries? The people who wanted to operate distilleries in Key West, that’s who. They, also, apparently decided 9,000 island residents per distillery was about right to make the economics work, with the distinct possibility of attracting some of the millions of tourists who visit the island each year. So, which distillery should you visit? All of them, of course, for each one has a distinct flavor.

The first legal distillery incorporates those three words in its name. Located on Simonton Street near Front Street, the Key West First Legal Rum Distillery is located in a building that dates to 1900 when it was Jackâ€™s Bar. By 1903, the building had become a Coca Cola Bottling Factory, and now it’s producing rum that may or may not be mixed with Coke.

Made with Florida sugar cane and infusions of coconut, vanilla creme brulee and key lime, this rum has no preservatives. The venue offers free 20-minute tours during which it tells guests it is not trying to make a lot of rum, but rather quality rum. Here, tourists can taste sugar cane juice, sweet and pleasant. The guide said there are more than 1,500 types of rum, but this distillery uses demerara sugar to maintain its unique flavor. Guests, also, get to taste 145-proof rum as it is being processed.

Within several blocks is the second oldest rum distillery in Key West called Key West Distilling on Southard Street. It produces premium rum, gin, whiskey and vodka. Closed Sundays, Jeffrey Louchheim is its chief distiller and has produced national award-winning spirits including Rumbunctious Rums and Spyglass Vodka. Tours are as simple as requesting them upon arrival, and guests can purchase bottles onsite.

Finally, there is the Hemingway Rum Company on Simonton Street, a block from the first distillery. Open daily, it offers guided tours every hour starting at 11 a.m. and tickets are $10.75 per person. The 35-minute tours share the history of Hemingway and Key West, and of course, a propensity for alcohol. Among the interesting anecdotes and memorabilia on the tour is a school essay written by Hemingway when he was nine. Asked to write about his future plans, the young lad nailed it. The last two lines state he would travel the world and be a writer.

In the distillery area, one immediately smells the rum. Guests also see the tasters of the three stages of rum, the distilling vat, rotatable barrels and bottling area. With a rooster on its label and Hemingway associations on its lid, Pilar’s blonde and dark rum are works of art.

Among the sensory offerings on the tour are a tasting station for molasses, from whence its rum is made, like most American rums, and a sniff station with eight scents one might find in the barrels where the rum is aged. The aromas are butter, cocoa, apricot, grapefruit, honey, cinnamon maple and vanilla.

Free tastes of Pilar’s blonde and dark rum are available with or without a tour, but a visitor must show identification.

At Christmastime, the Hemingway Rum Company produced a sherry-flavored rum, and it is in the running for the best rum of 2017, said the guide.

The building housing the Hemingway Rum Company has walls that are six bricks deep. A factory creating hand-painted fabric and then a tobacco warehouse were its first uses. The thick walls were handy in curtailing theft, as tobacco was worth more than gold in those days.

Another interesting tidbit learned during this tour was that George Washington insisted that rum be served at his inauguration… made in Barbados. Nowadays, Washington may just be proud of American-made rum — made in Key West.