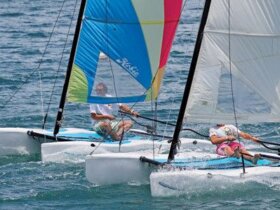 The Inter-Collegiate Sailing Association (ICSA) honored Jade Forsberg for her contributions to the sport of college sailing by inducting her into the ICSA Hall of Fame at the annual ICSA Meeting.

Forsberg, of Holetown, Barbados was recognized with the James Rousmaniere Award for student leadership. The award recognizes an undergraduate for extraordinary achievement in leadership whose efforts have made a significant contribution to the development, progress and success of his or her club or team, conference or the ICSA.

The Hall of Fame was established in 1969 to honor individuals for either undergraduate competitive achievement in sailing or outstanding leadership and service to the establishment, development and growth of the sport. The names of the inductees will be added to the ICSA College Sailing Hall of Fame, which is on permanent display in the Robert Crown Center at the U.S. Naval Academy (Annapolis, Md.).