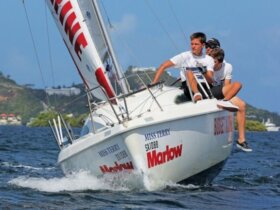 Nada was designed by William Fife and built at
Fairlie in 1929 to conform to the Second International
Rule.The Metre
Rule and the roots of Metre Boat Racing stretch back
to 1906 when a conference was held in London with representatives from the
major yacht racing nations to find a formula that would produce beautiful,
seaworthy boats that could race against each other internationally.
The Americans refused to attend the
London Conference, stubbornly clinging to their beloved “
Herreshoff Rule”, till they too saw the obvious
advantages of an international rule and joined. The French delegation was in attendance,
but felt their honor seriously slighted when it became apparent the British
yachting mandarins were forcing through their choice for the new rule. To
appease French honour and prevent a walkout the French Delegation was allowed
to contribute the divisor “2” to the end of the pre-arranged
British formula explaining why to this day “6-Metre Class” yachts
like Nada are in actual fact closer to 12 metres
long.

The new International Rule worked and soon boats of various
ratings from 5-Metres to 23-Metre Class were competing against each other on
both sides of the Atlantic. However by 1920
some undesirable traits were developing within the class as the boats became
extremely thin and over canvassed creating the need for an amended Second
International Rule.

Today the 6-Metre Class races under a Third International
Rule which meant when we began Nada’s rebuild we were presented with a
difficult choice; were we going to rebuild Nada as she was built to the Second
Rule using original techniques and materials or were we going to rebuild her to
do what she was built to do; sail as fast as she possibly could. Purists may say that strengthening Nada
with a sheathof
veneer and introducing plywood ringframes to support
a modern rig of rod, carbon, Spectra, and alloy is defiling the boat and the
memory of William Fife.Normally I
would agree, but in Nada’s case, with her history of rig development
under Uffa Fox taken together with the whole spirit
of the 6-Metre Class being one of racing beautiful boats on the edge of
physical possibility, I actually believe that Fife would approve of our efforts
to bring Nada back under the Third Rule, regain her certification, and
competing against other 6-Metres in the Caribbean and abroad.

Nada’s rebuild has entered its final phase with the
laying of a teak deck and the bolting on of her lead keel. It is our hope that the sight of this
beautiful vintage racing machine fulfilling her designer’s 78 year old
ambitions on today’s race circuit will inspire others to join us here at
Woodstock Boatbuilders in creating a 6-Metre scene in
the Caribbean.