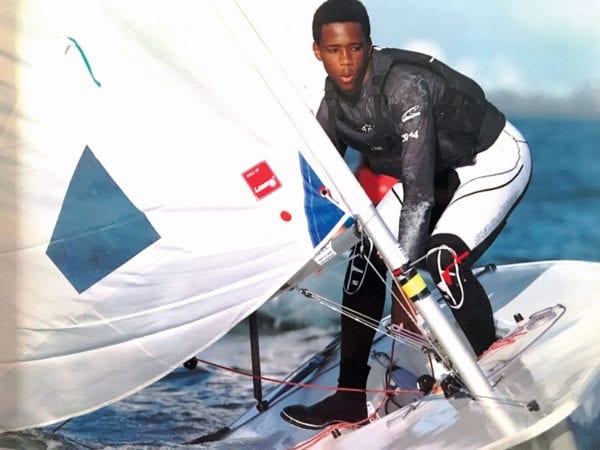 The teacher who asked the BVI’s Thad Lettsome what he did on his summer vacation, certainly got an earful of excellent sailing news. The 16-year-old Tortola native who attends high school and is a member of the sailing team at Tabor Academy in Marion, Massachusetts, went from strength to strength on the world sailing stage in June, July and August. He finished 10th in Laser Radials at the U.S. Laser Nationals in Houston, Texas, then an outstanding 14th out of 58 international sailors at the Youth Sailing World Championship in Corpus Christi, Texas, and finally 4th overall in Laser Radials at the CORK International Regatta in Kingston, Canada. Yet this isn’t the first time Lettsome has made waves in sailing. It all started several years ago.

“Several of my friends had started sailing when I was nine years old and they asked if I would like to try,” says Lettsome. “Now, what I enjoy best is that since there are so many variables in a single race, when you win a race, it means that you have managed everything better than everybody else and made the least mistakes. I also enjoy meeting lots of people in different levels of the sport, and work with and compete against them. It is a much easier to work with a professional in sailing than in other sports where it’s almost impossible.”

Lettsome started his sailing career in the Optimist, under coach Omari Scott in the Royal BVI Yacht Club (RBVIYC) Youth Sailing Program. A year after his first lesson, he won the age 10 and under White Fleet at the International Optimist Regatta in St. Thomas. He traveled and competed in Optis in Puerto Vallarta, Mexico; Lake Garda, Italy; Punta del Este, Uruguay; and Buenos Aires, Argentina. Racing proved challenging because he grew fast and soon became too big for the eight-foot dinghy. It was clear then that Lettsome was destined for bigger things – literally. First, sailing a Zoom 8, measuring six inches longer than an Opti, he finished second at the 2015 Caribbean Dinghy Championships in Puerto Rico and helped his BVI team win this event for the first time. Secondly, he moved up to the 13.6-foot Laser, and rose even higher on the scoreboard than in his Opti days.

“The BVI has always had good laser sailors such as Alec Anderson and Robbie Hirst who inspired lots of children to sail Lasers. I never thought about doing anything different,” Lettsome says.

In addition to placing extremely well in the three major regattas this summer, Lettsome had an opportunity to train with the Royal Canadian Yacht Club and join the Canadian Laser Radial National Team Training Camp in Toronto for a week. This was organized by coach Chris Watters, a Canadian who was a former instructor in the RBVIYC Youth Sailing Program. Lettsome also benefited from several days of one-on-one coaching by Brenda Bowskill, a member of the Canadian Sailing Team in the Women’s Laser Radial at the 2016 Summer Olympics. It indeed was a great summer and the perfect foundation to even greater sailing success in the future.

On the near horizon, Lettsome would like to medal in the Youth Sailing World Championships in the Laser Radial and continue to do well at regattas in North America. Eventually, he would like to switch to the Laser Standard class and win a medal at the Olympics for the BVI.

What is Lettsome’s advice to other young Caribbean sailors?

“Make friends, especially from other islands. Never turn down an opportunity to train with other people. To stay inspired, find somebody you aspire to be like. For me, that’s someone on the Olympic circuit or even beyond that. Find this person, research and watch them and notice what they do, or how, when and where they train, what they eat, how they exercise, their gear. It could be anything. This is what helps me to stay inspired and to understand what I should be doing and why.”