There are many things to consider when preparing for a voyage at sea in a small boat: the wind, the waves, the sea can sometimes be anything other than predictable.

Two potential hazards facing the cruising yachtsman: dragging anchor and running aground. Charlie likes the oft quoted truism, “If you brag that you’ve never run aground you probably haven’t been anywhere.”

Charlie ran aground in Key West once. A friend had said, “Come and tie up to my dock behind the house.” The waters all around the Keys are shallow but Charlie thought he could make it – he couldn’t. ‘De watter were too t’in.’ The approach to the channel had a grassy bottom so when he bumped to a halt and started listing, he wasn’t too worried. Charlie was in the water in a flash with mask to check surrounding depths when a dinghy came up to investigate, “You better get out o’ here fast – the Coast Guard will fine you big time if they catch you tearing up the bottom.” “What! A bit o’ sea grass, you gotta be kiddin’.”

The long and the short of the story is that Charlie eventually managed to float his boat. He hauled it over with the main halyard tied to the end of an anchor rode with the anchor 200-ft off the beam. It wasn’t easy, several other small boats appeared with helpers as if by magic and after several hours – Voila! Success!

But as Charlie was retrieving the anchor, a plough, he saw that somehow a conch had managed to impale itself on the anchor’s tip. Horror upon horrors – if the marine police fine boaters for damaging the sea grass what would they do for damaging a conch?

Anchoring Equipment – How Do I Know What to Buy?

It was sometime later after everything was stowed and back to normal and the panic had subsided that Charlie reflected on the situation. His grounding experience had definitely caused some sea bed damage. Here are some of his conclusions:

• If the depth is questionable do not attempt to go there at high tide. Rather choose a rising tide at about half way up. So, if you run aground you have a chance!

• There are many new types of anchor that have superseded the CQR (Secure), once thought to be the gold standard in anchors. One that springs to mind is the Vulcan by Rocna – it sets quickly on any bottom due its design and weighted tip, has great holding power and stows well on the bow.

Just as when we go for a country walk our footsteps may damage an ants’ nest or a bug on a blade of grass so an anchor may impact a seagrass bottom. Cutting a furrow across a grassy bottom due to a poorly set anchor (usually not sufficient rode) is a major sin.

It’s been reported that although seagrass only covers 0.2% of the seafloor, it absorbs 10% of the ocean’s carbon each year, making it a valuable asset in the fight against climate change. What to do?

As usual it’s all about common sense, although common sense is not very common. Sand and mud bottoms are acceptable for anchoring while coral, grass and kelp should be avoided. Low water depths and bottom types are marked on all good nautical charts so there’s no excuse.

The most effective anchors should be on the bow of your boat ready to be deployed in an instant if necessary. You may have to sail into an anchorage and if so, only the best is good enough; you may not have a second chance.

Good ground tackle is the best insurance you can buy.

Julian Putley is the author of The Drinking Man’s Guide to the BVI; Sunfun Calypso; and Sunfun Gospel.

Cruising the Bahamas – Don’t Leave Home Without It! 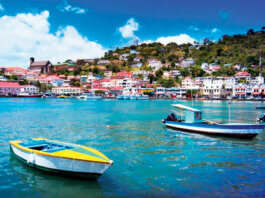