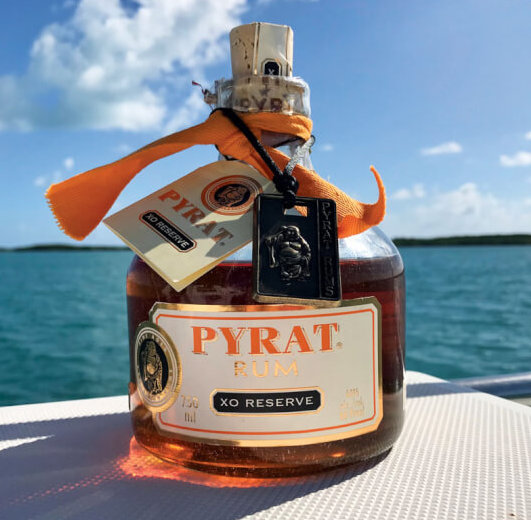 We’ve been waiting for a good time to review a rum that has always been on our boat. Well, it was until we sold our boat a year and a half ago in hopes of downsizing our boating life. Sounded like a good plan at the time. Three surveyed boats later we are finally back on the water and Pyrat Rum XO Reserve was the very first item we put on board.

Pyrat Rum XO was launched in 1997 by Patrón Spirits. Patron’s business model was to act as a third-party company sourcing what they deemed the best rums available and blending them according to their specifications. Originally Pyrat was produced by the Anguilla Rums Company but has since moved to Diamond Bottling Plant owned by Demerara Distillers Ltd. in Guyana, South America. Today Patrón Spirits is a part of the Bacardi International, the largest privately held spirit company in the world.

Pyrat is a blend of Demerara rums sourced primarily from Guyana then blended with rums from various Caribbean producers. Sugar cane is cultivated along the banks of the Demerara River in Guyana and harvested twice a year, extracting the juice to produce molasses. The liquid is distilled using traditional pot still methods then aged in both French Limousin oak and toasted American oak barrels.

The rum comes in a squat, corked bottle reminiscent of those used by rum runners and pirates who roamed the Caribbean in the 1800s. Bottles are garnished with a bright orange ribbon around the neck and a medallion featuring Hoti, “The zen patron saint and protector of little children, fortune tellers and bartenders.”

The nose is slightly sweet with molasses and orange blossom notes. I get the sweetness from molasses on the palate with floral notes and charred oak sitting in the background. As I explore more I find some vanilla and tobacco to round out the palate. Most of these notes dissipate leaving me a distinct charred oak finish. I like how the rum goes from a sweet to slight florals to an oak finish.

The golden liquid coats my glass without much lacing. The nose is overwhelming orange with a hint of light brown sugar. It’s not overly sweet or fruity but leads me to expect a sweeter rum. The initial palate is nothing like the nose. There is a distinct alcohol note that quickly bites the back of my throat before settling to a very satisfyingly, warm and creamy finish. When I continue to explore the rum I find orange peel and floral notes but above all there is a creaminess to the rum which reminds me of a lighter rum and Coke. I love how the finish lingers.

We began our rum experience early 2000 with Pyrat XO Reserve and it’s still one of our go-to rums. At around $30/bottle it makes a great entry level sipping rum to launch your rum journey.