Rock Iguanas of the Caribbean

As mentioned in a previous article, “Islands of the Three Eyed”, the islands of the Caribbean are considered a hot spot for the discovery of new species even as critical habitats rapidly disappear. The Caribbean islands also present a wealth of diversified wildlife due to their relative isolation from one to the other. This fact is ever so evident in the variety of Cyclura or Rock Iguanas presently living on the islands. 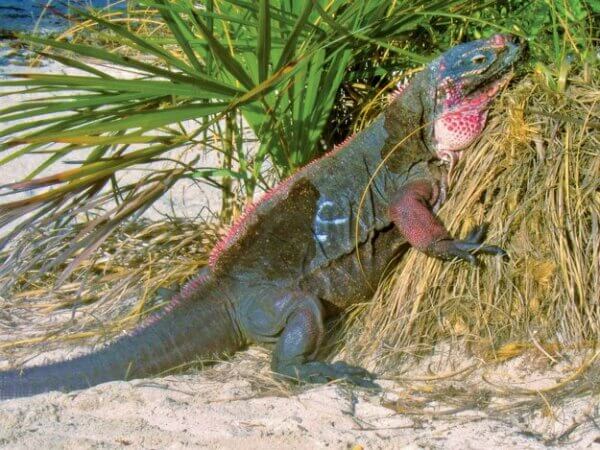 Our Rock Iguanas, while they can grow to 6 feet in length with half the total length comprised of the whip-like tail, are smaller and heavier bodied than their mainland cousins, the Green Iguanas. And, each sub-species of Rock Iguana is particular to either one island or a small group of islands in close proximity. Their coloration varies widely from the beautiful and extremely endangered Blue iguana of the Caymans to the red clay colored Jamaican Rock Iguana to the almost black iguanas I visited on a tiny cay in the Exumas 5 years ago under the watchful eye of the secret cay’s protectors.

Because that cay was so very small and with sparse vegetation, we were allowed to take food to the black iguanas. Swimming ashore from a dinghy while holding our offerings over our heads, we made our way on to what looked like the deserted beach of a dry desert island. Suddenly from over the crest of a dune came a ‘herd’ of very large black iguanas at full speed. Some of the less brave in our small group immediately turned and swam back to the dinghy. Those of us who stayed enjoyed an afternoon walking with the black iguanas around their little island where only the hardiest of souls could survive.

Rock Iguanas, also known as “whorl-tailed” iguanas due to the colored rings on their tails, are only found in the West Indies. Their genus, Cyclura, comes from the Latin meaning ‘circular tail’. While most Rock Iguanas are terrestrial, some, like wild one I named Peeping Tom, climb into the tree canopy. Tom climbs about 20 feet to sun himself on a favored branch only 3 feet from my window where he also spends a good deal of time watching the goings on in my home including the activities of my dog and cats.

While Rock Iguanas are not considered marine iguanas, they are adept at surviving hurricanes and floods and are able swimmers spending long periods in and under the water when the need arises with no ill effects. Their ability to swim lends credence to one dispersal theory that some island iguana populations probably took root when iguanas swam ashore during periods of low sea levels and once levels rose those iguanas evolved into the island-specific species we know today.

Although Rock Iguanas are considered to be herbivores, they will eat insects, small animals, and smaller lizards. They do not reach maturity until 6-9 years and can live 25 years or more. They generally mate in January and we see males are quite brightly colored during this time. After a gestation of approximately 3 months, the females lay from 3 to 12 leathery, pliable eggs in sand burrows and among crevices and cracks in the islands’ limestone and volcanic rocks. Females protect their nests but when the eggs hatch in June and July the young are on their own as the mother takes no further interest. This past summer, I was privileged to see two hatchlings, one of whom was disabled due to a particularly tough yolk sack entangled in its legs which I very carefully removed.

Our Caribbean Rock Iguanas are considered to be some of the most endangered species in the world with two of those species becoming extinct during recent history. Loss of habitat along with both feral and domestic animals’ destruction of nesting sites and killing of young hatchlings is decimating Rock Iguana populations throughout the Caribbean.

There are reintroduction and protection programs in place for the Jamaican Rock Iguana (long thought to be extinct until a hunter’s dog killed one in the remote
mountains in the 90s), the Grand Cayman Blue Rock Iguana, and the Anegada Rock Iguana. It is believed that there are fewer than 200 Jamaican Iguanas in the
wild and even fewer of the Grand Cayman Iguanas as scientists and volunteers work feverishly to protect the wild ones while developing captive breeding and
reintroduction plans.

As I was writing this article I remembered a curious behavior noted when visiting the black iguanas on the small Exumas cay. Some of the iguanas seemed to be sneezing and I wondered if iguanas caught colds. What I later learned is that because iguanas rarely drink water, obtaining most of their fluid from the plants they eat and because these plants have high sodium content, the Rock Iguanas long ago developed a filtering system for removing the excess sodium and they expel those salts by sneezing.

Becky_Bauer
Becky Bauer is a scuba instructor and award-winning journalist covering the marine environment in the Caribbean. She is a contributing photographer to NOAA.
RELATED ARTICLES
Anguilla