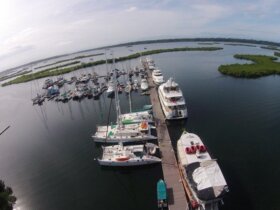 There wasn’t the chaos of last year when Hurricane Sandy blew straight through the middle of the Port Antonio International Marlin Tournament (PAIMT). However, there was an exciting commotion to see who would ultimately win this year’s 50th Anniversary PAIMT, which was hosted by Jamaica’s Sir Henry Morgan Angling Association out of the Errol Flynn Marina, October 4 to12. What’s more, the lay-day tournament for local fisherman in native canoes produced a whopper the likes not seen before in this event.

Thirty-one boats and 130 anglers from Jamaica, the U.S., Canada and the Netherlands caught 37 blue marlin over four days of fishing. Of these, 33 were released, four fish were brought to the scales and two were disqualified for weighing less than the 300lb minimum.

Two boats each released the most or four blue marlin apiece. Yet it was King Fisher II that landed the Champion Title when its anglers beat No Problem to the trophy on time limit.

The second day more than made up for lost time when the fleet caught 16 blue marlin, followed by eight on day three and the final 11 on day four.

“Peter’s team and ours had both released three blue marlin at the end of the third day,” Chung explains. “However, Peter was ahead on time and in the lead as we went into the final day. This last day, I caught my fourth marlin at 8:00am and he caught his fourth at 8:30am. It was suspenseful seeing if he would catch another to beat us, especially after we lost one that would have been our fifth marlin. But, he lost two.”

King Fisher II’s success comes down to teamwork, Chung says. “I’m the owner, so I get to select where we go. Andy Chung, a friend from Miami, watches the baits swim and makes sure they don’t jump out of the water while we are trolling. Andy Campbell, a pilot friend for Air Jamaica, determines what speed we go for maximum fish catching efficiency. Finally, my friend Ernest Chang makes the call on what baits we use based on the water color. It’s definitely a team effort.”

The PAIMT is a qualifying event for the IGFA World Championships. King Fisher II’s win earned the team an invitation to compete in the prestigious Offshore World Championship, which will be held April 6 to 11 2014, in Quepos, Costa Rica.

The PAIMT’s lay-day saw 45 native-style fishing canoes take to the water for a one-day tournament. These craft average 28ft in length with a 6 to 7ft beam and are powered by 50 or 80 HP outboards. Less than an hour after lines in, one of the two anglers aboard the See Mee hooked up huge blue marlin on a handline. He fought the monster marlin for over an hour before getting it to the boat. No amount of effort could budge the fish onboard, so the men tied it alongside. Shortly thereafter, another canoe with three anglers came over to help. It took the strength of all five men to wrester the marlin aboard one of the canoes and in doing so nearly sunk the vessel to its waterline. Back ashore, the marlin weighed in at a whopping 510lb.

This golden anniversary edition of the PAIMT hosted awards in over 30 categories with total prizes valued at US $15,000. www.jamaicasportsfishing.com