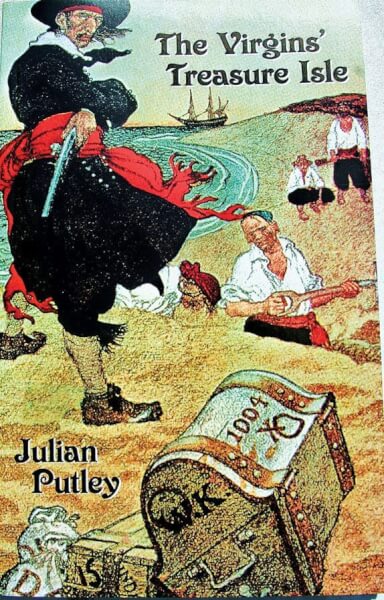 The British Virgin Islands have long been associated with pirate activity. There’s fantasy, hearsay, hyperbole, myth and fiction – and a nugget of truth here and there. We know that Sir Francis Drake passed through these islands in 1595 in yet another raid on the hated Spaniard. He mustered a fleet of some 24 ships in Virgin Gorda’s North Sound in a location now called Drake’s Anchorage and sailed down the channel between Tortola and the southern cays that now bears his name.

The Dutch pirate or ‘freebooter’ Joost van Dyke settled here in 1648. We’re reminded of him every time we visit his namesake island or that famous hotel and bay, Little Dix, originally Little Dyke’s, his second base of operations. There are also stories of Blackbeard, Black Sam Bellamy, William Kidd and a certain pirate, George Norman.

Norman, originally an Anegadan rogue, had an island named after him, Norman’s Retreat, later to become Norman Island and it became the subject of a monumental event in 1750. It all began when the Spanish treasure fleet, bound for Spain and just south of treacherous Cape Hatteras, was struck by a severe hurricane and one richly laden treasure galleon, the Nuestra Senora de Guadelupe, was driven ashore near Ocracoke Inlet, North Carolina.

Some opportunistic Englishmen, with no love of Spaniards, decided the time was right to seize the treasure, load it onto two of their small vessels and sail away south to islands in the Caribbean.

One of their bilanders* ran aground but the other finally fetched up at Norman Island and the crew, aware that the Spaniards would be hunting them down, transported their vast haul ashore and buried it. The booty amounted to 55 chests of silver dollars to a total of 165,000 dollars, two chests of wrought silver and church plate. Other valuable cargo included large quantities of cochineal, vanilla, indigo, tobacco and hides.

One thing that the pirates overlooked was that Norman Island is visible from Tortola and that they had been spotted. The president of the local council, a Mr. Chalwell, sailed over to Norman Island to investigate and after much confusion he decided to confiscate (for safe keeping?) some of the silver whilst several other Virgin Islanders did the same. Meanwhile the pirates escaped with a portion of the booty and some of the cargo.

By now the Spaniards were on the lookout for the pirates and had complained bitterly to the English authorities. Word reached Lieutenant Governor Fleming of the Leeward Islands, whose authority included the Virgin Islands. He was tasked with apprehending the pirates and retrieving the treasure and eventually returning it to the Spaniards; acts of piracy like this were enough to foment war in Europe. Fleming sailed in a privateer, from the seat of power in Antigua, with two companies of marines to Norman Island to try and resolve the incident.

He was met with stiff resistance; the Tortolians had resolved not to divulge any information regarding the treasure and in the end Fleming managed to retrieve just over 20,000 dollars in silver by rewarding the finders rather than offering belligerence. It can be seen that a huge amount of treasure was unaccounted for.

And what became of the pirates? It seems that most of them got off pretty lightly by either turning King’s evidence or trading silver or information for leniency. It is interesting to note that in 1910 or thereabouts a treasure chest was found in one of the caves on the leeward side of the western promontory of The Bight on Norman Island. Treasure Point, Privateer Bay and Money Bay are all names on old BVI charts that point to long gone derring-do on Norman Island.

*Bilander: a small two-masted merchant vessel, a type of hoy distinguished by the trapezoidal shape of the mainsail.

A Proclamation:
Whereas Information has been given to me, the said Lieutenant General of a certain piracy and felony comitted on the High Seas by Owen Lloyd, William Damas, William Blackstock and others their accomplices in seizing, running away with, and converting to their own use, a Certain Sloop from North Carolina with a Treasure onboard the same Sloop consisting of Gold, Silver, Jewels, and other valuables to the value of one hundred and Fifty Thousand pounds lawful money of Great Britain or thereabouts, which sloop was hired at Carolina by the Governor of Mexico to carry the same Treasure from North Carolina to Old Spain, on account of the said Governor, or other subjects of Spain, and that after the same Piratical and Felonious taking, the Criminals conveyd the same Sloop and Treasure to a certain little Island calld Norman Island under the dominion of His Majesty of Great Britain and within the Limits of my Goverment and there buried or conceald great part of the said Treasure and that certain British Subjects getting knowledge where the xxx Treasure lay buried, or hid have jointly and clandestinely dug up and taken and conveyd away the same to a very great value and conceal and convert the same to their own use; And whereas I the said Lieutenant General thinking myself bound by all the Tyes of Duty to my Royal Master, the King of Great Britain (whose burden it carries to have National Justice done in this and such like cases within his Dominions) to the utmost in my power to secure and bring to Justice the said Pirates and Felons and to procure the said Treasure.