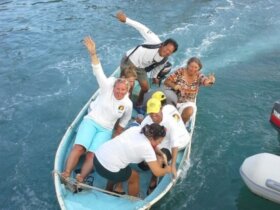 It started with a hole in the regatta racing calendar and an idea whose time, according to several members of the St. Maarten Yacht Club, had come. Why not stage a new event aimed specifically at multihulls, the fastest growing segment in the sailboat-manufacturing business? And what better place than St. Maarten, in the blue Caribbean, the epicenter of so many developments in catamaran design, construction and competition that had taken place through the years?

Yes, there had been plenty of multihull racing in the islands before. But never had this specific group of St. Maarten sailors come together to launch a fresh regatta with the aim of long-term stability, a racing series that catamaran and trimaran enthusiasts could mark on their annual schedules. With that goal in mind, the first annual Caribbean Multihull Challenge was launched. Now, with the racing completed after the inaugural event on Feb. 8-10 this year, it’s time to reflect on what took place, and what lies ahead.

The record will show that 15 boats signed up for the first CMC in 2019, and an eclectic fleet it was. There were sleek, custom cats, like the radical Bieker 53 cat, Fujin, and a 50-footer, Shooting Star, designed by the talented design team of Melvin & Morelli.

A quartet of trimarans were among the pioneer racers: local favorite, Tryst, a fixture in the Caribbean for almost all of her 50 years; Le Tri, another St. Maarten boat with another talented island crew; Ineffable, a sleek 60-footer with a homeport of Hong Kong, which would be honored as the yacht that came the furthest to participate; and Liquid Spirit, a Neel 45 production tri built in France with a Dutch crew, a reflection of the event’s international flavor.

They weren’t the only production boats in the CMC, however, which is not surprising considering that increasing numbers of yachts in bareboat charter-boat fleets around the world are cruising catamarans. Indeed, they were a strong presence in the first CMC, and included a pair of Leopards built by Robertson & Caine in South Africa: Seaduction, a 47-footer, and Kidz at Sea (aka Spellbound), a Leopard 45. The French were also well represented, with a Lagoon 410 (Hey Jude), a Fountaine Pajot Belize 43 (Primula) and an Outremer 49 (Think Good Thoughts).

Rounding out the entrants was the largest boat on the starting line, an HH 66 built in China, R-Six; a familiar St. Maarten cat, Arawak, from Island Water World; and another pair of local catamarans, GUIMAMALOU and Enola. The diversity across the board was stunning, and a true representation of both classic and modern multihulls.

Race officials split the fleet into three racing classes, with the flat-out racers competing in Class A. It was clear from the get-go that the boat to beat was Fujin, owned by former Microsoft executive Greg Slyngstad and with a crew made up largely from his friends back home in Seattle, including two-time Olympic medalist Jonathan McKee.

The Fujin story was very cool: a year ago, the boat capsized in the Caribbean 600, and underwent a total refit before its first comeback regatta, the Caribbean Multihull Challenge. It won going away, for which it was honored for the regatta’s Most Outstanding Performance and received a sweet dive watch from Oris Watches, the event’s Official Timekeeper. The CMC served as Fujin’s tune-up event before sailing in the 2019 Caribbean 600, and CMC race officers hope that, in the future, competitors will hope to emulate their success and compete in St. Maarten before moving on to the longer ocean race.

In Class B, the Island Water World team on Arawak used their local knowledge to their total advantage, winning their division with three straight bullets; Arawak’s efforts on the final day of competition also was noted as a Most Outstanding Performance, and the crew also took home a new Oris Watch. Just behind Arawak, Tryst and Le Tri put on a spirited battle for second place, where Tryst prevailed. Perhaps more importantly, skipper Bernard “Appie” Stoutenbeek was awarded the regatta’s Style & Grace prize, a fitting award after bringing the pretty red cat back to life after she was severely damaged in Irma.

The Class C honors became a match race behind longtime friends and rivals Garth Steyn and Ian Martin, on Kidz at Sea, and Petro Jonkers on Seaduction. The Kidz were all right, and were the winners of that duel and class, which featured a couple of other production performance cats as well. It proved one of the points of the event – that you don’t need a flash, custom racer to enjoy close, fun, rewarding yacht racing.

Going forward, the CMC has established itself as a worthy, successful endeavor, and race officials have already announced the second running, to take place beginning on Valentine’s Day 2020. In future editions, it’s hoped and believed that many more production cats will be on the starting line. Many owners of cruising cats avoid racing for the simple reason they don’t think their boats are optimized for competition. But the regatta proved the Lagoons, Leopards and similar vessels provide lots of fun and thrills on the racecourse.

And the timing of the CMC makes it a perfect tune-up event for the ever-growing Caribbean 600, the inter-island ocean race that starts and ends in Antigua and attracts a strong fleet of multihulls. In last spring’s Caribbean 600, Fujin used that strategy to perfection, winning the CMC and then finishing second soon after in the 600. The CMC is an ideal venue for getting the kinks out and practicing maneuvers in close-quarters courses off St. Maarten before heading out on the extended 600-miler.

With the fun and success of the inaugural event established, it seems there’s only one direction for the CMC to head in the future: Straight up.