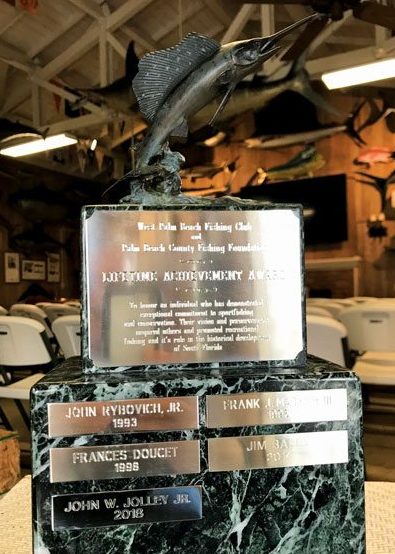 Much of what is known about the biology and life history of Atlantic Sailfish, an iconic and economically important marine game fish, can be credited to John W. Jolley, Jr. It’s no wonder then that for only the fifth time in the 80-plus year history of the West Palm Beach Fishing Club (WPBFC), the Club presented its Lifetime Achievement Award to Jolley. The Boynton Beach resident, who in the 1970s worked as a marine research biologist for the State of Florida in a field laboratory that occupied the back portion of the WPBFC clubhouse, also conducted research on red tide, swordfish, and other subjects that additionally proved to be important contributions to marine science.

When asked what one accomplishment he is most proud of during his career and why, Jolley answered: “The what is working successfully with dedicated fishermen, crews and other scientists advancing our biological understandings of Atlantic sailfish life history one step at a time! The why is that’s the way science moves forward and helps us create useful new knowledge. Succeeding generations will take any contributions steps further,” says Jolley, an avid angler himself, WPBFC member for nearly 50 years, and current member of the Club’s Board of Directors as well as Scientific Advisor.