A scientist at Mote Marine Laboratory’s Elizabeth Moore International Center for Coral Reef Research and Restoration (IC2R3) discovered how a coral growing process called micro-fragmentation could accelerate reef restoration; now, Mote is using it on 28 different coral species. Dr. David Vaughan, executive director of Mote’s center in Summerland Key, accidentally revealed the micro-fragmentation success when he broke a silver-dollar-sized coral into little pieces. The “aha” moment came when each tiny piece sprouted new growth. Currently, scientists cut coral into micro-fragments and attach them to forms that are the size of a piece of pepperoni; genetically identical micro-fragments are able to grow and fuse together until they are large enough to be planted on a reef. The replanted corals recently showed a rate of survival around 95 percent.

Additionally, the lab has improved upon Mother Nature in that nursery-grown staghorn coral grows four times faster under controlled conditions than in the wild. Vaughan said about 38 places do replanting and most of them replant staghorn coral, but only a couple labs are producing and replanting 28 species like at the Keys’ Mote campus on Summerland Key. 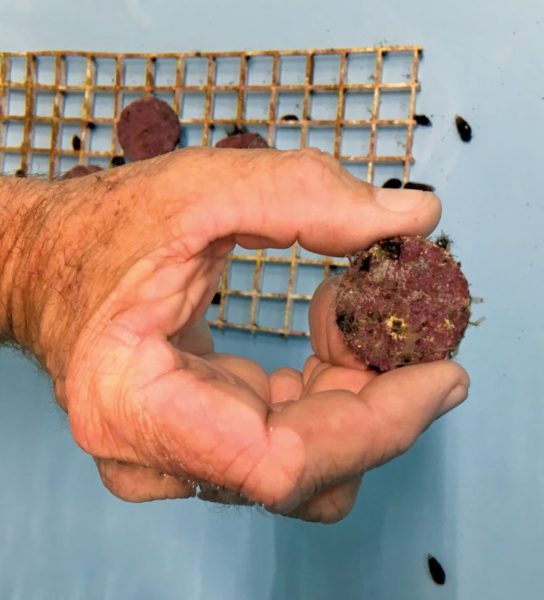 Because coral acts as food and habitat for delectable edible species, such as crab, lobster, shrimp and fish, everyone that enjoys eating seafood has a stake in reef restoration efforts. “Coral reefs comprise less than 1 percent of the ocean but are responsible for 25 percent of our fisheries,” Vaughan said.

Originally, the Keys’ Mote Marine Lab was located at Pigeon Key reached by crossing the Old Seven Mile Bridge but Hurricane Georges in 1998 limited access to the bridge. So, Mote purchased and repurposed the former “Monkey Lab” as it was known about 23 miles further south. It is conveniently located near Looe Key, a premier diving spot. The former lab’s rhesus monkeys used for research had denuded an offshore island of red mangrove, and while contemplating the restoration of those mangroves, along with seagrass and wetlands restoration efforts, Vaughan wondered if “underwater reforestation” of corals also could be pursued.

By replanting thousands of coral fragments and nurturing them under specific conditions, Mote scientists are discovering that certain genetic varieties of corals show promise for better withstanding disease, bleaching and storms. Thus, experimenting with genotypes that enable better natural resistance to factors such as hurricanes, ocean acidification or warmer ocean temperatures are among the scientists’ goals.

Genetically different “parents” produce different offspring genotypes. By producing 1,000 different strains of genetic diversity, the lab can predict which corals have the best odds of surviving under various conditions. “When we can predict the best outcomes, we’ll try and plant our best athletes,” Vaughan said, referencing the Winter Olympics competition that was broadcasting at the time. Because of this capability, Vaughan is optimistic about the future of coral reefs.

The center has 28,000 coral starters in 8-foot long tanks. They are protected from the Florida Keys sun and provided consistent temperatures for optimal growth and survival.

While the center received four feet of storm surge during September 2017’s Hurricane Irma, staff had protected 15,000 coral fragments indoors, which came through the storm just fine. Also, Vaughan pointed out, without coral reefs offshore protecting the Keys and south Florida, the 30-foot waves produced by Irma could have come ashore.

IC2R3 was designed to withstand a category five hurricane and has obtained LEED Gold Commercial certification for its environmentally-friendly features. It also houses laboratories with state-of-the-art equipment for visiting scientists from around the world, a place for university students to intern and pursue hands-on research, as well as summer camps for budding marine biologists in middle and high school.