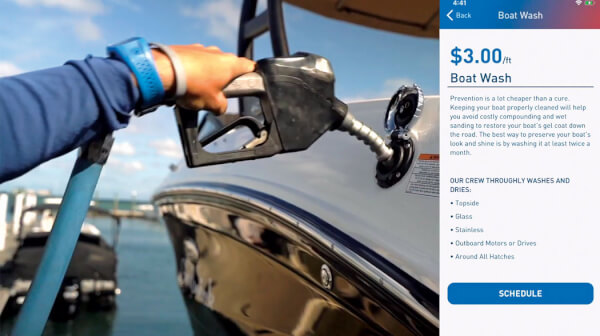 Moores Marine, Inc. has completed more than 100 major restoration projects in their 35 years of expert service. Names like Trumpy and Defoe are a few of the names in representation at the Moores facility; owners of these iconic crafts, reminiscent of a bygone era, trust in Jim Moores and his team to uphold the design principles in truest fashion.

Moores is a member of the Society of Naval Architects and Marine Engineers, Trumpy Yacht Association and The Antique and Classic Boat Society. He also acts as a nautical archaeologist, salvaging original boat parts from derelicts headed to the scrapyard. “In our N.C. facility, half of my warehouse is full of antique boat parts.”

Once they’re lost, that’s part of American history that disappears. And that’s kind of the reason for me being in this crazy business. I would like to preserve as many of these boats as I can…it’s my career.

The Beaufort office displays original teak furniture and the deckhouse (which doubles as Moores’ personal office) rescued from the Trumpy Ibis. The captain’s lounge is adorned with photos, lady figureheads, a ship’s wheel, models of schooners, and a coffee table made from the Presidential yacht Honey Fitz’s hull. Each artifact has a story that Jim Moores tells well.

Moores spent years building commercial fishing boats and dories in Lubec, Maine before focusing on Trumpy restorations. “It’s hard to find people that really know what they are doing. Just because you’ve built a dinghy, doesn’t make you a boat builder, so I’m always training people. If you can’t do good work, you won’t be working for me, I guarantee it. I’m more like a conductor now, than a flute player. I’m more of the person who looks at the whole thing, instructs the project on how things are put back together and how things are done. I’m still very involved in the projects we do, especially when we get the big projects; I’m onsite more than in my office. I do get my hands dirty, trust me. I’ll grab a grinder, or whatever it takes.”

“It’s not the ones that can be saved; it’s the ones that can’t be saved” Moores says, reminiscing on his work. “There [are] only a handful of Defoes left on the planet… I’m not just talking about Defoes, I’m talking about Consolidated, Alden, and New York Yachts left. Once they’re lost, that’s part of American history that disappears. And that’s kind of the reason for me being in this crazy business. I would like to preserve as many of these boats as I can…it’s my career.”

Searching for original parts to truly restore the boat, though, can be unsuccessful. “We find an owner of a similar boat, we talk to them and say, ‘I need to borrow parts off your boat’, and when they get over that, I make rubber molds of them. We’ve even done lost wax processes on some of them. It’s kind of an expensive way to make parts, but it’s worked very well.”

Moores has turned down wooden boat restoration projects in the past because owners wanted to drastically change the boat’s structural integrity, and he didn’t want his work associated with it. “I think every owner wants to put their own touch on the boat. It’s reality. Most things can be changed back, like wallpaper, but I’ve had people that want to knock out walls, and I’ve had to explain they were structural bulkheads. I’ve worked for billionaires that asked me to do stuff like that, and I just say my work’s not for sale.”

“My world is to respect the masters that built the boat and to bring it back if possible. That may involve technology, but I try to remain true to the original builder. Yes, we do laminate wood because we have to, and steaming wood wouldn’t do for the things we do. When we did the Honey Fitz, and the schooner, Summerwind (1929 John G. Alden), we found vertical sawn wood where the annual growth rings were less than 1/8 of an inch apart, which is called “aircraft certified.” We had to find the right materials to do the job. If she was originally built out of Douglas fir, then she was rebuilt out of Douglas fir with the same quality; I want these boats to be as original as possible.”

Moores says the biggest problem he sees is owners hiring unskilled workers first, because it’s cheaper. Those same owners often end up coming to him in the end to make corrections, and pay twice for the work. “Boats are a dream, and if it becomes a nightmare, usually you get rid of it. It’s a very delicate balance to keep the boat safe and keep the owners safe as time goes on… My goal is to perpetuate these boats into the future.”

Wearing a 1930’s style yachting cap, Moores is seen weekly on his 1947 Trumpy, the Aurora II, one of several that John Trumpy built for himself to test out his latest innovations. “With these boats, the destination is not that important, it’s like life… it’s about the journey, not the destination.”

Moores observes how people react to seeing the Aurora, “…people walk out on a pier, or a car stops and they get out. They don’t know a Trumpy, they don’t know the history of a Trumpy, don’t know anything about it, but they know about beauty. They go ‘Wow, that’s a beautiful boat.’  If I put in at a dock and the dock is full of $10 million or $15 million yachts, they stop to look at my Trumpy.” To Jim Moores, beauty is worth saving.