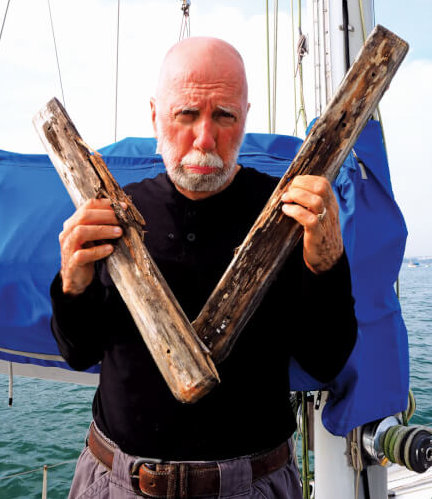 Rot is central to my life. I’m not talking about moral rot—although I’m riddled with it—I’m talking about actual rot, physical rot, onboard wood rot. As a youngster growing up aboard an old wooden schooner built in 1924, I was well aware that the planks to my cradle were continuously decaying. That’s why we hauled every year and replaced two or three of the planks—to keep our vessel and our lifestyle buoyant—as other less fortunate vessels silently slipped beneath the surface. Alas, rotten planking isn’t the worst of it. There’s more than planking underwater; there are stems, deadwood, and horn timbers as well. And that’s not all—inside the vessel are bilge timbers, frames, and butt blocks that are eager to turn flaccid as well.

Replacing a plank is easy—replacing a stem or a horn timber is devilishly hard. And keeping the first plank up from the deadwood, the garboard plank, from leaking was so difficult that the elderly shipyard caulkers than I hung with as a young child called that seam The Devil. (This is where English expressions such as “There’ll be the Devil to pay!” and “Between the Devil and the deep blue sea” come from.)

The Agony of Dried Snot

That’s both depressing and unsustainable.

…did I mention expensive and time-consuming as well?

Hull leaks, assuming enough bilge pump capacity, are actually the preferred leaks. Yes, we used to sleep with one hand hanging out of the bunk aboard my first liveaboard vessel Corina (built of Port Oxford cedar in 1932) so the rising bilge water would awake us to pump—no big deal.

It was the deck leaks that truly bedeviled us—soaking our bunks and pillows with every rain, every wave; each sheet of salt spray that bounded aboard. Ditto, the squirting mast partner leaks. And the dribbling skylight leaks, etc. And the more a boat leaked and trapped small pools of water below, the faster she rotted. And rotted. And rotted some more. From inside. And from outside. And from each side in between! And, don’t forget—rot never sleeps and it’s contagious. And, worse, once rot is established, it never gives up except to flame. (Back in the day, every shipyard had a scorched 55-gallon drum we boaters were required to burn our rotten wood in immediately.)

Rot wasn’t something rare that was discovered with great disappointment. It was a constant given, a grim fact of cruising life. Sure, today we romance wood. A part of me still loves wood and I cherish my dog-eared copy of Wooden Boat and I’ve replaced many a plank, many a frame (there are no ribs on a boat!), and numerous butt-blocks. Yes, I’ve built entire decks and cabins and cockpits out of wood. And I realize that a wooden craft will last as long as you continuously renew its wood. And, sure, long after not a single stick of the original boat exists, the proud wooden boat owner can say defiantly, “She’s 100 years old and as good as new!” And they may be right—in the sense that she is new, her wood that is. All that remains of the original is her shape—and figment of imagination in the wooden boat owner’s copper-naphthenate-soaked brain.

Am I being too dark? No.

I have sat, as a worried youngster, in the reception room of the “Friendly Bob Adam’s” loan company to learn if we were going to be granted a loan to pay for our annual haul-out…before we’d paid off the last loan to do exactly that. 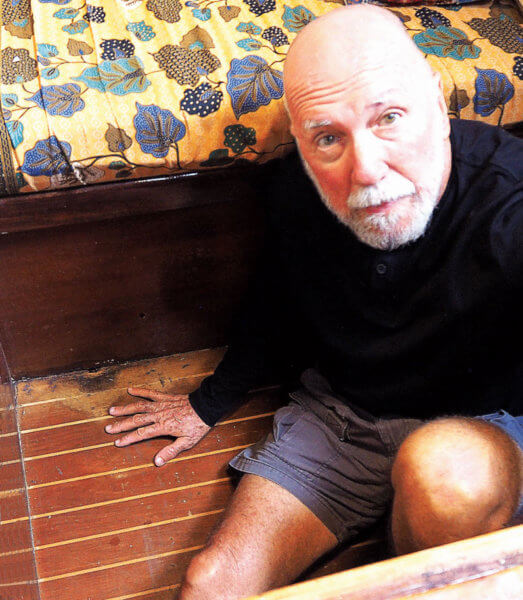 My father wanted me to be able to make my living in any port of the world so he taught me what he believed were the necessary marine skills: wood butchery, caulking, Morse code, and celestial navigation. (When we needed sails for our schooner, we stitched them up on the dock from Egyptian cotton. Just because we were broke didn’t mean we weren’t ‘can-do.’ We were so ‘can-do,’ that our fingers bled from working them to the bone.)

Yes, my entire youth was spent at the feet of shipwrights named Chip. But my father saw the light just before he died—and summoned me to his death bed.

The poor guy was barely alive. Still, he insisted on getting out of bed and then kneeling before me—reaching up beseechingly. “Promise me, son, promise me!”

“That you’ll never own another wooden boat!” he screamed, the hellfire dancing in his dying eyes. “They’re false mistresses, son! You can give them everything—all your time, all your money, all your love…and in the end, they will f you!”

I’ve kept that promise—Carlotta, Wild Card, and Ganesh weren’t built of wood. Actually, solid fiberglass is still a miracle to me. The fact that it normally doesn’t rot, doesn’t weaken, doesn’t get punky seems divine. (Don’t get me started on balsa-cores, please don’t!)

My current Amphitrite 43 built by Wauquiez is a top-quality boat. And I love her—especially since the interior woodworking is so splendid—from her teak-and-holly sole to her mahogany bulkheads and the exquisite joinery around the galley, dinette, nav station, and (most of all) heavenly aft cabin.

Structurally, my forty-year old vessel is probably stronger today than when she was launched—due primarily to improvements in her rig. I haven’t had a speck of trouble with her in the last decade and 50,000 ocean miles. Well, I mean—other than the normal stuff like small leaks here and there. Oh, and somebody replaced all her water tanks with inflatable tanks and I’ve been replacing those chafe-prone sacks of trouble as they split.

In fact, I had on my To Do list a reminder to check the last remaining inflatable tank—on our starboard side—for leaks. Carolyn mentioned it was weeping water if she filled it. But, hey, life gets in the way, right? I’m busy, right? Busy going out to eat in fancy restaurants? True, true—it is a known fact that in any major port of the world, if you’ve got a wallet, I’ve got the appetite!

Of course, even modern fiberglass boats have some wooden bits. And until recently, I used to say (and occasionally be forced to back up) that every five-year-old fiberglass vessel has rot in it—and it does, under the head and galley. (Nowadays, more and more of a fiberglass boat is fiberglass—this has been a gradual process. Half the Taiwanese Turkeys (think John Gardner designs) had solid fiberglass hulls, crappy stainless-steel fittings, and utterly awful polyester-sheathed plywood decks and leaky wooden cabin houses.)

Anyway, recently my wife Carolyn dropped an earring while we were having dinner in our spacious dinette that seats six—and it rolled out of sight. After dinner, she fetched a bright flashlight to find it—and instead, found a hole in our teak-and-holly sole (floor, is the landlubber’s term).

Teak doesn’t rot? Ha ha! The term ‘teak and holly’ sole is really just a piece of plywood with a one-sixteenth inch of teak veneer glued on top. Why was plywood invented? Well, some folks say because, since the grain of the wood went in different ways, it was strong. Others, like myself, say plywood was invented to allow all that exposed end-grain to rot even faster than normal wood.

Regardless, I had a rotten hole in my beloved boat. I will have to chop out all the rot and laboriously replace it with new wood—which itself will begin rotting the moment I bring it aboard. And the interior of my vessel will be an utter sand-dusty mess for about a month—that’s the story of my waterborne life. Of course, my body will probably rot before this current repair fails—but still. Some poor sap will have to deal with it someday! And that’s just the way it is. Everything rots—my boat, my body, this harbor, our planet. And, truth be known, this is a good thing. We’re transitory—nothing we do matters (nor should) for long.

And, tonight at dinner at the prestigious Cricket Club (established in currently Covid-free Singapore around the time of the civil war between the States) I’ll have something to amusingly bitch about. “Oh, my beloved Ganesh has more leaks than the White House,” I’ll say over the surf & turf. “Indeed,” Carolyn will chime in over the bread pudding, “our vessel is weaker than my husband’s morals!”

That’s the sad reality of being an aging, pandemically-stranded marine writer with little talent and a hefty appetite—if we couldn’t sing for our supper, we couldn’t afford to eat.