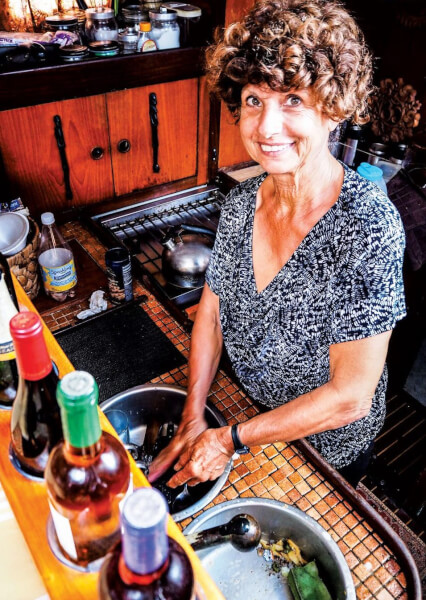 Everything on a boat is complicated—even the kitchen sink. To prove my point, let’s focus on the lowly galley sink. Boring? Perhaps. But upon such technical details hinge the difference between the happy vessel and the pain-in-the-butt boat. Lubbers often say to me, “That’s the life, Fatty—lying around a boat all day in paradise,” and I think to myself, yeah, but if I didn’t sweat the details I would not be able to.

The first problem that comes up is water. The galley sink is constantly being used around water. It would be nice if we could eliminate this fact, but we can’t. So we have to deal with it.

Let’s put it another way: If your boat is more than seven years old, there’s dry rot in your galley and head area. (Notice I didn’t use a qualifier like ‘probably’ but merely stated the actual reality?)

The reason is stagnant fresh water always breeds dry rot, and the launch pad is often under the rim of your sink. Try this experiment: Heavily use your sink by washing the breakfast dishes, allow the area to dry, and then inspect under the rim of the sink with a tactical flashlight, a magnifier, some toilet paper (to wick up the moisture), and a toothpick (to stir the compacted dirt).

If under the sink rim is wet, your galley top—which is plywood under the Formica—is rotting. This will only get worse, and it will not get better. It is your job as ship’s husband to fix it. Luckily, it is relatively easy. Just remove the sink, and reseal it with a flexible but firm sealant like Life Caulk. (Don’t use 3M’s 5200 or you’ll have to destroy the whole galley next time.)

Great! You have now prevented the water on top from getting under the galley. Alas, that’s not the only water involved. The bottom of your sink occasionally sweats (condensation) and forms drops of water that cling to the underside of the sink. Even worse, there’s salt water in your drain hose, and it pulses up and down constantly at sea or at anchor—misting the inside of the tailpipe with salt. And, of course, there’s salt in the air unless you are sailing in a freshwater lake. So, no matter what you do, the tailpipe of your sink is gonna be damp with saltwater.

Now, 99% of all production boats come with standard tailpipes. This is wonderful in the sense you can get a new tailpipe for your marine sink at almost any hardware store. That’s the good news. The bad news is that you’ll need to because the sink drain in your boat (probably) has a pot-metal nut that turns to powder around salt. (Heavy sigh.)

This can sink your boat.

The solution? There is no practical one—so I kept two spare tailpiece nuts wire-tied to my tailpipe hose on Wild Card (our previous boat, a Hughes 38) at the ever-ready.

Plus, I tied my drain hose up in such a manner that if the tail pipe broke, it would not fall below the waterline and sink us.

Part of the job of a good ship’s husband is to be prepared for common marine scenarios. And many live-aboard boats have been flooded via dropped sink drain hoses. 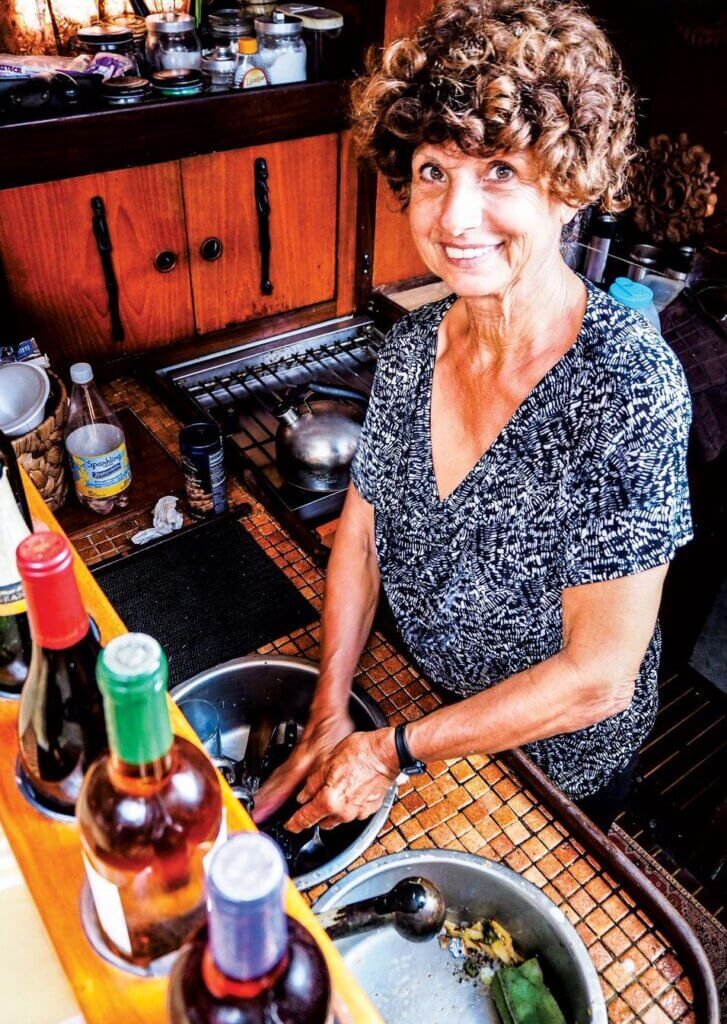 This whole thing stinks, right? (I mean the sink, dummy, not this column!)

Sure, all sinks eventually stink from the drain and also under the sink from permeability of the plastic hose.

The hose stink under your counter can be solved by using a smooth reinforced plastic hose INSIDE a heavy marine exhaust hose and double clamping it at each end. By double hosing it in this matter (a useful trick on head outlets as well) you can prevent it from stinking for at least a decade of live-aboard use.

Make sure your sink outlet has a working seacock, so you can close it and regularly pour bleach down the drain to push back the cooking grease odor. (If you don’t, the slightest harbor roll will cause your galley sink to ‘puff’ halitosis.)

Now that we have your galley top not rotting, your sink not leaking, and the whole area not stinking—let’s turn our attention to the faucet. Leaking is very common in this area if the spout swivels. Occasionally, tightening the top nut will solve this but, alas, often the aging seal needs to be replaced but even the best ship’s chandlery seldom carries such seals. Thus, they need to be special ordered from the manufacturer.

Most boats have a single faucet. Fine. However, on all my offshore vessels, I’ve added two more—one, for the completely separate ‘deck water’ system I collect off the deck, and another for salt water.

The deck water is simplicity itself. I put a deck-fill at the lowest part of the deck, which runs to its own tank. When it rains, I open the cap and it floods with water. (On Wild Card, I used the jib sheets to funnel the water to the deck-fill, on Ganesh I just put sponges into the scuppers and the whole boat becomes my collection system.)

We do not drink this deck water because it has some bird poop and anchor mud mixed with it. But we do, after filtering through a 20 micron filter, use it for dishwashing and showering—our two biggest water hogs.

The trick to conserving water is to not waste it. That sounds stupid, but it is not. Some boats gush water under great pressure the moment you open the faucet—even if you want a single drop.

The best bet is to have a Whale foot pump and an inline check valve—both of which will allow you to quickly get only a drop when you want only a drop.

You can still have a pressure water system if you want. We do—because we have two sinks, two heads and a deck shower all run off a single pressure pump.

Our saltwater pump uses a totally separate Whale inline bait-well pump—because they are cheap and dependable. We have two switches to actuate it: a toe-operated doorbell switch (cheap again) and a standard marine push-pull.

If I want to wash my dirty hands in saltwater, I use the foot switch momentarily—and then rinse the salt off with deck water. This uses zero drinking water. If I am doing dishes at sea, however, I just allow the salt water to run continuously—why not?

Is there more to know about marine sinks? Sure, I haven’t delved into sink size, shape, or depth for example. I just wrote a book on anchoring (Creative Anchoring) and could surely dash off another hundred pages on sinks. But you get the idea—even washing your hands on a boat is very, very complicated.

Editor’s note: Cap’n Fatty and Carolyn just completed their third circumnavigation and are back on their beloved St. John.)

Cap’n Fatty is the author of Chasing the Horizon and numerous other marine books. His latest, Storm Proofing your Boat, Gear, and Crew, is out now. Visit: fattygoodlander.com