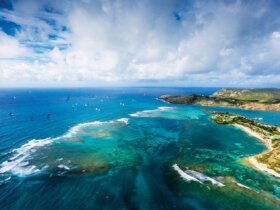 Twenty-two years ago, Jost Van Dyke resident, bar owner and calypsonian Foxy Callwood noticed the growing dominance of multihulls in the BVIs’ robust charter industry. Together with friends at the ‘Loyal West End Yacht Club’, Foxy decided to create an event to see what those boats could do.  In the decades since the regatta’s inception, the race has turned into the largest multihull regatta in the Caribbean.

Last year’s regatta was cancelled, as the BVI was still reeling from the impact of Hurricanes Irma and Maria, and the return of the event this year was warmly welcomed.

This year’s fleet comprised 16 vessels – 13 catamarans and three mono-hulls or ‘one legged cats’ as their class is jovially known in this mutli-hull event. Racers met beautiful, sunny blue skies and flat seas; however, the winds were far from record setting, averaging zero to two knots, with occasional gusts all the way to four knots. Some sailors even reported finding puffs of wind bursting to six knots!  The event drew in vessels from around the Virgin Islands and Puerto Rico and sailors from around the world.

The approximately seven nautical mile triangular race course, which ran from Great Harbour to Great Thatch Island, over to Sandy Cay and back to Great Harbour, took approximately six hours for most vessels to complete in the light conditions. One boat noted “as we approached Sandy Cay, we were actually drifting backwards.”

The race used staggered one-minute starts to prevent collision.  Of the 16 entering vessels, only six vessels were hearty enough to survive the weather and complete the course.

Despite the unfavorable conditions, The Loyal West End Yacht Club & Foxy’s are known regattas that are notoriously ‘one part race and one part party’ and the event ended with Foxy’s Masquerade Ball featuring BBQ dinner, a costume contest and live music by Final Faze. Most participants had so much fun, that many have requested that the 2019 regatta be turned into a two day event.

Mount Gay Rum and local food and beverage distributor Road Town Wholesale were the official 2018 sponsors. A case of Mount Gary rum was awarded to Sail Pending who earned the title of ‘Baddest Cat’ for the event. As is tradition with West End Yacht Club, all vessels that completed the course received prizes, which included gift certificates from local BVI restaurants. Every entrant received Mount Gay Rum and other goodies.