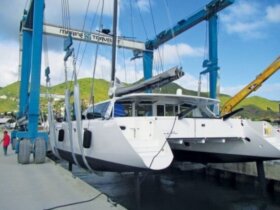 On my 4th birthday, my mother informed me that she was moving to Tortola but my father was not coming with us. We lived down in the West End for a year and my mother then met my stepfather-to-be, Albie Stewart (Tortola Yacht Services).

At the age of five, my sailing career started in a Sunfish, which was the thriving class in the BVI and VI. I remember many weekends loading up the Bertram 31s with Sunfish and heading down to STYC. Of course, it was the fathers that were racing and the kids were left on the beach. It was here that my friendships were formed with Holmbergs, Rosenbergs, Averys etc.

There were about eight of us in Tortola that sailed our Sunfish every day. As soon as school was out we were sailing from noon to dark. We would race from Road Town to Peter Island and back every day!! One day, it must have been blowing 30, so we doubled up and went out. Sheared the mast right off and the whole rig went in the water. This time, though, we were on the south side of Peter, drifting towards nowhere at 5:30pm! Out of nowhere, a 90-foot ketch making its way from St Maarten to Tortola threw us a line and a six pack of beer and we made our way back to Road Town.

Normally, I would help out in the boat yard painting bottoms or sneaking away to paint my Sunfish a different color when one summer I helped out in a sail loft in the yard. Making $1.50 an hour, I was the trash picker upper but I would say from that point on I was at least interested in what sail making was all about.

When I finished High School, I started full time at Hood sails, BVI, working for Bill Bullimore. The plan was for me to work there a summer and it was “arranged” that I would go and work for Ted Hood himself in Marblehead, Massachusetts. I arrived there at 6am, banged on the door and yes, Ted Hood was in early and he let me in the sail loft. Unfortunately, he had no idea who I was and knew nothing of this arranged meeting. I begged and pleaded with him and he hired me right then and there and I started work that same day. Hood was the top dog in sailmaking back then and we had 70 of us in production. I worked there for 5 years learning the hands-on skills that have honestly made me the designer and sailmaker that I am today. Nothing like getting down on your hands and knees and cutting shape into a panel with Ted Hood looking over you to turn you into a good sailmaker. During those 5 years, we built sails for all the maxis – Kialoa, Matador, Boomerang and many more.

My sail making skills then took me to Australia to work for the New York Yacht Club’s entry in the 1987 America’s Cup. We had three boats on the water daily so between sailing and sail making it was a busy 2 ½ years. I returned to Tortola in early 1988 where I met my soon-to-be wife who was cooking on a Charter Boat. I ran Hood Sails BVI for 2 years and then decided I needed to get back to the US to get back in the Grand Prix arena. Over the next 12 years, I ran Sobstad Sails in Annapolis where we built sails for America’s Cup Winner America 3 as well as Whitbread winner Swedish Match. It was here I also began designing sails. We branched off from Sobstad and Quantum Sails was formed around a lunch table in Annapolis

With my father winding down his career with Tortola Yacht Services and having plans to move off island, I knew it was time to set up something in Tortola that would give me reason to return regularly and hopefully in time full time. With my daughters in school in the US and I still involved technically with Quantum in US and South Africa, I knew I had to find someone who could manage the loft. I looked no further than Kevin Wrigley. Kevin was looking for something to do after his Willy T stint and with a strong sailing background, honest demeanor, I knew he was the right person to sell and service our clients. From Annapolis, I brought Dave Tarasiuk, who is a talented sailmaker who has fitted perfectly into island living. Dave handles all the service work and IC-24 new sail work. A partnership was formed which is now Quantum Sails BVI.

If there are any young readers out there who might be interested in a sail-making career please feel free to contact me and I will try and point you in the right direction.