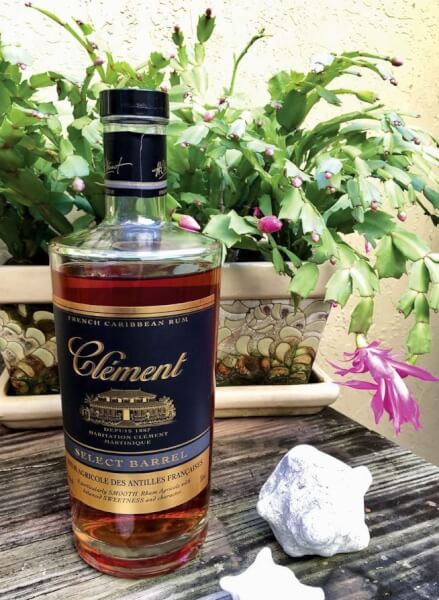 “Employee Recommended,” read the starburst on the shelf in front of Clément Select Barrel Rhum Agricoles from Martinique. Years ago, we were given a bottle of Clément X.O. which Terry secretly hid for herself because she enjoyed it so much. So, it wasn’t a far limb to go out on to select an employee recommended rum. Well, we thought it wasn’t.

Rhum agricole is the French term for cane juice rum, a style of rum originally distilled in the French Caribbean islands using freshly squeezed sugar cane juice rather than molasses. Sugar cane once drove Martinique’s economy until the introduction of sugar beets and cheap South American sugar led to the industry’s collapse. In the late 1800’s, Homère Clément, a prominent member of the Martinique community, purchased Domaine de l’Acajou, a 43-acre sugar plantation and transformed it into a producer of world-class rhum agricole.

Inspired by the enjoyment of fine brandies, Clément mimicked the distillers of Armagnac, a distinct kind of brandy in southwestern France, to perfect his rhum agricole process. Clément Select Barrel is a recent addition to the Clément family. The rum is aged three years in small, hand selected French oak barrels which are no larger than 650 liters.

The initial nose has a very harsh alcohol note which eventually settles to a light floral with some citrus blossoms. There is a charred note as well but again it’s very subtle. The taste is not one I’ve had before, especially in a rum. It has a liqueur texture without the sweetness. The taste reminds me a lot of grappa which is made from all the leftovers product in the bottom of the barrel. This is going to sound strange – it tastes like the smell urine has after you eat asparagus.  Second, third and fourth sip gets a little better it still has an earthy, vegetable taste.

Okay, Clint calm down. Let me try. The rum has very nice lacing with a dark copper tone. There are very subtle honey, orange and charred wood notes on the nose. I’m going to admit, the first sip made me cough uncontrollably once it hit my throat. There was a harsh burning going down the pipes which took me by surprise. I tried again with half the sip and kept it right on the front of the palate for quite some time. The consistency of the liquid is syrupy without the sweet taste. As it moves back to the throat the charred wood overpowers anything else that wants to come through. Once on the throat it burns going down.

Overall
We didn’t enjoy this rum at all, not even as a mixer. Clément has some other great offerings. Maybe start and end with them. Select Barrel is not worth the $38 price point.