ALL AT SEAThe Caribbean\'s Waterfront Community
HomeEnvironmentConcert with a Cause: Rock the Ocean’s Tortuga Music Festival
EnvironmentSouth FloridaFort Lauderdale, FL

Concert with a Cause: Rock the Ocean’s Tortuga Music Festival 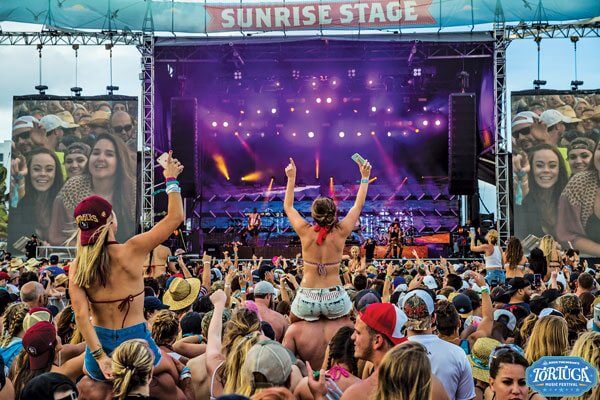 Whatâ€™s better than live bands on the beach with headliners like country music star Kenny Chesney? A concert with a cause! This is an apt description for Rock the Oceanâ€™s Tortuga Music Festival. Set for April 7 to 9 on the surfside sands of the Fort Lauderdale Beach Park at 1100 Seabreeze Boulevard, this three-day festival hosted by the nonprofit Rock the Ocean Foundation supports scientific research, ocean conservation and marine educational initiatives.

â€œThe event evolved from a solely conservation based event to a music festival with a conservation heart while we were in the conceptual phase,â€ explains AJ Niland, chief experience officer for New Orleans, Louisiana-headquartered promoter, HUKA Entertainment. â€œThe theory was we could reach more people with our conservation message. Festivals tend to attract a much larger audience. It would give the message a greater platform. It would also be an amazing music festival. The combination of the beach, the music talent, the fans and the cause is a great recipe.â€

When the event became a festival, it needed a name and a brand.

â€œGiven the nature of the ocean causes of the Rock the Ocean Foundation, and the fact the area around the site is host to many sea turtle mothers who come to lay eggs, we thought we should honor the turtles and thought the name Tortuga was fitting. Sea turtles are an issue near and dear to us and we take a great deal of extra care during the festival on this front,â€ Niland adds.

This yearâ€™s fifth annual Tortuga Music Festival includes country music stars Luke Bryan and Chris Stapleton as headliners along with Chesney. There will also be more than two dozen of the hottest artists in country, rook and roots music including Nelly, Daya, Darius Rucker, G Love & Special Sauce, Ashley McBryde, the Quaker Hills Night Hawks and many more.Â The cool new addition of a turntable stage will keep the music going with little if any interruption. 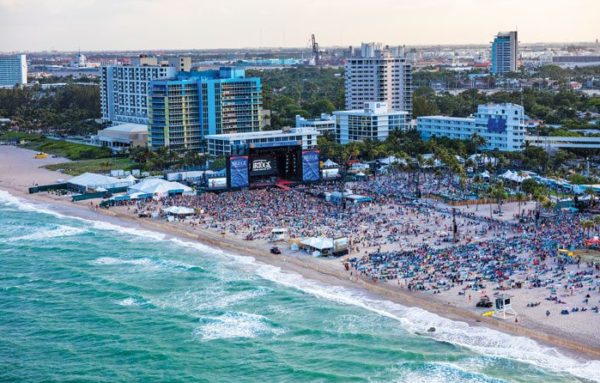 One of the highlights of this concert with a cause is the Conservation Village. This is an area with over twenty exhibits set up on the festival grounds, all within earshot of the music. Here, there are several interactive and educational experiences. In past years, these have included a live touch tank, a submarine, a turtle ambulance and displays on shark tagging and tracking, sea turtle rescue simulation, a life-size fishing simulator and lionfish capture. There have even been chefs showing how to prepare sustainable seafood choices. These activities center on the Rock the Ocean Foundations give core conservation issues: sharks, turtles, coral reefs, overfishing and marine pollution.

â€œWe view our most important work to be awareness,â€ explains Chris Stacey, head of the Nashville, Tennessee-based Rock the Ocean Foundation. â€œVia the Tortuga Music Festival, we have a big platform to educate tons of people. Itâ€™s a fantastic environment for â€˜edutainmentâ€. I look at it kind of like watching television. You tune in for your favorite show (or, in this case, artist). But, inevitably you also pay attention to the commercials during that show. In this case, the conservation messaging gets the same benefit as the TV commercials. You may not tune in specifically for them but you certainly are aware by the end of the show. This is important because weâ€™ve found that most core fans have absolutely no idea how bad the conditions of the worldâ€™s oceans really are.â€ 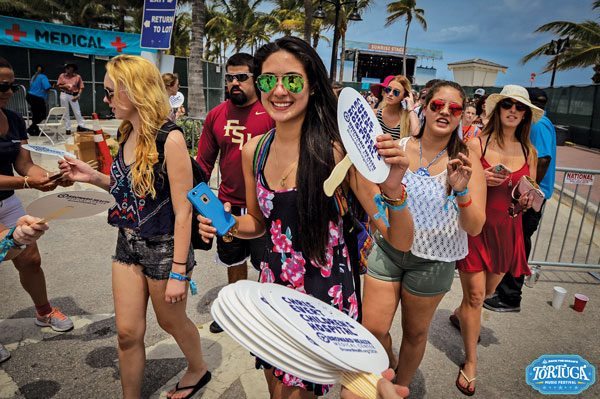 Festival ticket sales benefit Conservation Village partners and several other worthy marine causes. These have included the Florida Fishing Academy, which funds scholarships for low-income public school students to get out on local waterways; the Sea Turtle Oversight Protection program, which helps pay for infrared body cameras for the organizationâ€™s volunteers during overnight turtle monitoring patrols; and the Bimini Sharklab, which uses the monies to purchase acoustic tags to better understand the movement and behavior of this fish. 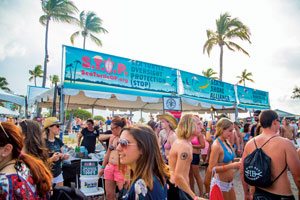 To date, over $300,000 has been given back to conservation partners as a direct result of the Festivalâ€™s ticket sales and donations.