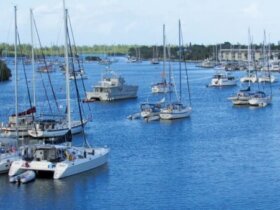 Florida Anchoring: So Who Owns the Sunset?

Sister isles Carriacou and Petite Martinique together are a mere 14.53 square miles, small scale as islands go, yet they host one of the regions most all-consuming carnivals. Performances kick off weeks before the pre-lent event, building an unquenchable fever that seriously dents the island rum supply. During nightly competitions, Monarchs are chosen, a Queen crowned, and bands battle for top billing. Carnival Village, in Hillsborough, is the hub of the action but the energy sails far and wide.

My carnival experience extends back a few years, stretching from St. Barths to Grenada with parades the main focus because, who doesn’t love a parade? I’d viewed Carriacou’s last-lap march, even endured a sleepless night anchored too close to a Wet Fete, so more mayhem was not on my radar. Maybe it was the music on local busses that lured me back, rising in volume with the year’s top soca songs; or the enticing posters plastered everywhere, announcing the action that shouldn’t be missed; or perhaps I just caught the fever.

J’ouvert, the official start to carnival bacchanalia throughout the Caribbean, is legendary on the tiny isles. French for ‘day break,’ revelers begin hours earlier on a spirited march to town dressed in few clothes but plenty of oil. Paint, motor oil, or in Martinique, chocolate, is worn, thrown and smeared by Jab Jabbers as part of their deal with the devil. For my J’ouvert debut, I rolled into town near noon hoping to catch the action but finding instead a war zone with apocalyptic, rum soaked zombies weaving through the street. The second time I braved it at dawn, on a packed bus dangerously low on its lines, declining offers of Jack Iron and his many cousins.

Near town, bands, troops and one-off groups cued up for a procession that wound through town in a not-so-orderly fashion. As crowds closed ranks, oil spread like wildfire along with an infectious exuberance for which there was no cure. Chains, tails, and horned hats were popular, referencing slavery’s Jab Jab Mas. Feathers, beads and bling spilled from elaborate costumes. Every corner had an impromptu bar and pop-up stalls sold hunger quelling pots of souse, barbecue and johnny cake. Speaker trucks moved at a turtle’s pace yet the music rocketed to nearby islands.

Children in charge of paint buckets did what kids do and just when I thought it was over, Grenada’s Commancheros pan band rolled around the corner and shifted the frenzy into high gear. I followed the gyrating trucks until my ears could hold no more, then danced to the outskirts of town to escape. A bus driver refused to let me on, demanding, “I gots to see ya butt.” I showed him, knowing he was checking for oil, then headed home to psych up for another round of action.

The next day, Shrove Tuesday, I headed to Mt. Royal for Shakespeare Mas, an unlikely competition showcased only on Carriacou. Participants layer stiff, festive tunics over white petticoats, don wire mesh face masks and arm themselves with sticks before facing off in pairs to out recite the Bard’s long passages. If a line is fumbled, a beating ensues as onlookers leap to escape the fray. Many Mas players are getting on in years so young ones, coached and tested, will carry the custom forward.

Later that day, the Last Lap Parade served as an encore to weeks of party prep and productions. It was the cleaned up version of the parade from the night before with Vegas style costumes, simplistic floats, polished marchers and space for anyone who wanted to jump in. The procession moved through town without incident, but by the time it made several revolutions and the sun disappeared, rules of conduct took a zany turn. No injuries were sustained, short of some major hangovers, because carnival is like that. And just like the title of Herman Wouk’s famed novel, “Don’t Stop the Carnival,” it came to a bittersweet end as planning the next one got started.

SAVE THE DATE!
Save the dates and bank some sleep – Carnival Season is here! No two are alike because each is charged by island pride and rooted deep with tradition. Watch from the side or join the action just don’t miss the big parade.

While the programs in the USVI and the BVI were initially identical in curriculum, there was a vast difference in the number of membership applications