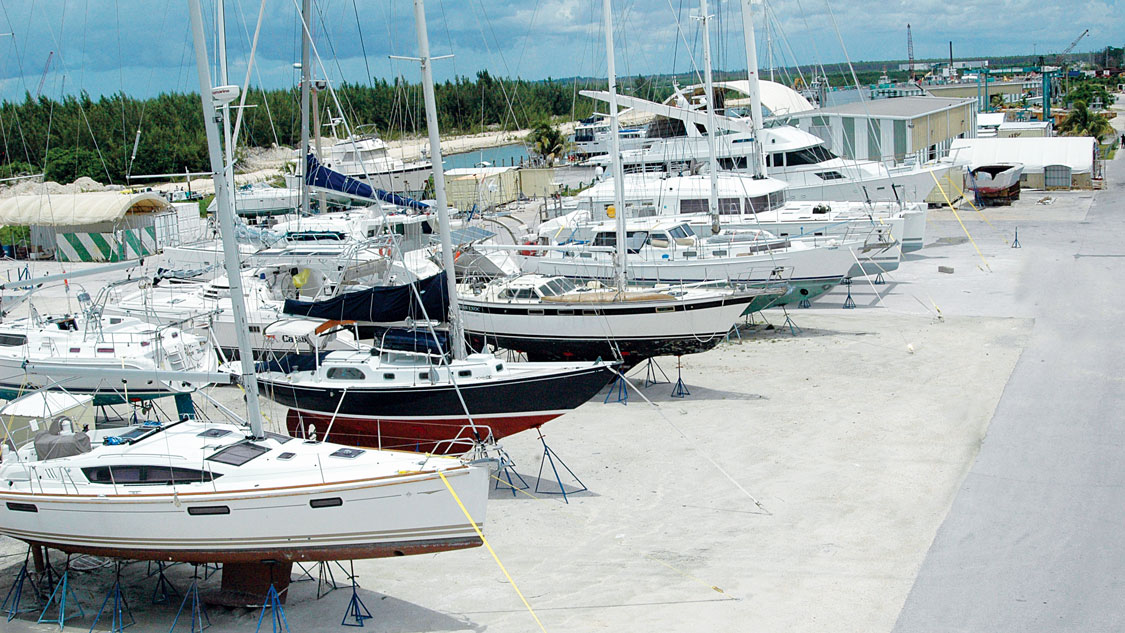 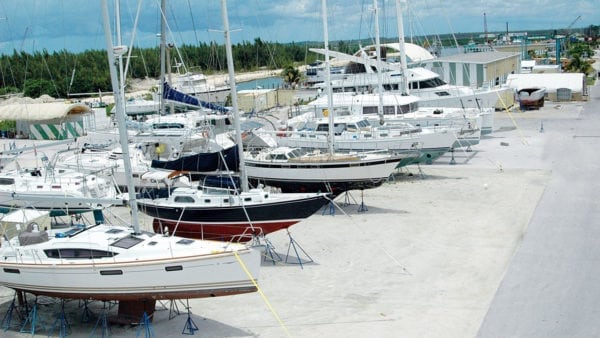 Big boats were the exception rather than the rule on the recreational yachting scene in South Florida during the 1960s. Consider that Tampa, FL-headquartered Bertram launched its 38-foot sport fishermen in 1969, while over on the state’s east coast the largest hull built by West Palm Beach, FL-builder Rybovich during this decade was a 56-footer. This is the era that Bradford Marine opened its first location in Fort Lauderdale, FL, in 1966. The rapid growth in size of recreational vessels has since then led the foresighted company to open a second location in a country nearby: the Bahamas. Today, Bradford Marine’s 47-acre yacht refit and repair facility in Freeport, Grand Bahama, sits at the crossroads of the annual migration of yachts between the Caribbean and New England. 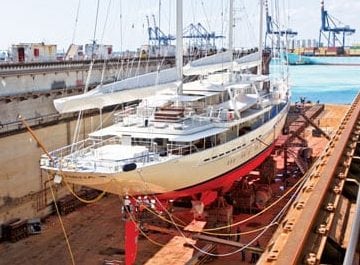 “The largest yachts in South Florida in the 1960s could easily access our Fort Lauderdale facility in spite of draft restrictions on the New River and fixed bridges,” explains Dan Romence, vice president of Bradford Marine Bahamas. “Then, in the late 1980s and early 1990s, the yachts got larger, with deeper drafts and higher heights. Many of our customers were moving up to these larger yachts and we were in danger of losing them. So, we decided to build a second more accessible facility.”

This tactic proved, at first, easier said than done. The company looked close to home, yet developments in South Florida at that time trended towards recreational and residential. Few wanted a shipyard in their backyard. However, Bradford didn’t want to stray too far from its support base of subcontractors. Combine this with two key points – a distance from South Florida of less than 100 miles and the fact that Freeport is a 230-square mile free trade zone on Grand Bahama Island with room for growth – and the Bahamas was an ideal choice. Bradford opened its Freeport shipyard in 1997 on a 47-acre site with a 150-ton Travelift. In 2000, the company added a 1,200-ton floating drydock built to ABS (American Bureau of Shipping) specifications. 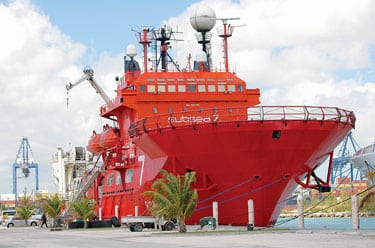 General services offered at first in the Bahamas mirrored those available in Florida. Then, the large number of commercial vessels in the area needing refit and repair such as ferries, tugs, mail boats, Royal Bahamas Defense Force vessels and U.S. naval ships from the base on Andros island, led to the addition of several other services. These include welding and fabrication, a machine shop with excellent shaft and propeller capabilities, and blasting and coating department, to name a few. Bradford has its own private plane to transport professionals with specialized technical assistance or to perform services that require a manufacturer’s subcontractor.

“Our largest dock is 1200-foot with a depth of 25-feet. We have a 180-foot floating dock at the main entrance. And, we are in the process of installing a 370-foot floating dock in the East Canal that should open later this year. This gives us the ability to work on larger vessels and provides a higher quality alongside facility. As a result, we have many customers who come directly to us rather than to Fort Lauderdale. Many of these are in transit to and from the Caribbean, or on their way over or back from the Mediterranean,” says Romence.

Power yachts, sport fishing vessels, and both sailing and power catamarans are among private recreational vessels that owners often opt to store in at Bradford’s Freeport yard for the summer in anticipation of cruising again in the winter. Strong tie-down facilities and a location higher than the flood stage meant no hauled and stored vessels were a total loss during Category 5 Hurricane Matthew
in 2016.

Although Bradford Marine’s Freeport location is situated in a more commercial area on the island, Grand Bahama itself is a great destination to visit in general or to explore while yacht work is completed.

“There are miles of unspoiled beaches on the island, many like Lucayan, Taino and Pelican Point have an ‘out-island’ feel. Plus, the Port Lucaya Marketplace has several restaurants, bars, shops, entertainment and other tourist-related places available for people spending time on Grand Bahama,” says Romence. www.bradford-marine.com