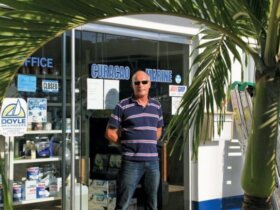 Bonaire has long been recognized as a fish-watchers’ paradise. Blessed with gin-clear waters and protective legislation that has declared the waters surrounding the entire island a marine park, the island abounds with interesting fish to see – especially in the small to medium-size range.  One of the more interesting and entertaining of the small fish are the bottom-dwelling blennies.

Most blennies have fleshy, often multi-branched appendages called cirri above their eyes and on their snouts. They are sometimes confused with the similar-sized bottom-dwelling gobies (photo 1), but the gobies have stiff bodies, two-part dorsal fins and a lack of cirri, whereas blennies have flexible bodies and most have single dorsal fins.

Ichthyologists divide blennies into four families based on anatomical features.

Blenniidae, or Combtooth Blennies, have a single row of close-set teeth lining their jaws. They have blunt heads that feature goggle eyes and prominent lips. One of my favorite members of the family are the so-ugly-they-are-cute two to four-inch Redlip Blennies (photo 2), who reside in rocky inshore areas and shallow coral reefs. Very territorial, both sexes patrol and defend ‘home’ patches of perhaps five square feet each. Although they will dart into cover when approached by a diver, quiet waiting will be rewarded by their return to the open where they typically perch on their ventral fins.

Tripterygiidea, or Triplefins, violate the general characterization of blennies by having three-part dorsal fins. Although there are five Caribbean species, they are all no more than an inch in length and so are not easy to find or identify, despite their habit of perching on the surfaces of sponges or coral heads. I was fortunate enough to stumble upon a beautiful example, the Lofty Triplefin (photo 3), perched conspicuously on the surface of a sponge of contrasting color.

Labrisomidae, or Scaly Blennies, feature tiny scales that are difficult to see. They generally have pointed snouts and small mouths and in many species, tall foredorsal fins. One of the more common of the scaly blennies in Bonaire is the two-inch Saddled Blenny (photo 4). Found on coral reefs at depths up to 50ft, they move about the bottom and stop to perch in tripod fashion.

Chaenopsidae, or Tube Blennies, include some with spectacular dorsal fins and are notable for their fierce mouth-to-mouth combat. One of the most common of the tube blennies in Bonaire is the one-inch Secretary Blenny (photo 5), easily identified by the white streak below and behind and the branched cirri above the eye. Found in waters five to 25ft in depth, they often inhabit small worm holes in white limestone rocks in which they perch with head extended; occasionally darting out to grab suspended particles of food.

Another entertaining tube blenny is the Sailfin Blenny (photo 6). This two-inch Blenny inhabits holes in the ocean floor, at depths ranging from three to 35ft. They rest on their long ventral fins with just their heads protruding, and then occasionally dart up and bob while flicking their sail fins up and down. This momentary display is how they can be spotted from a distance. If approached too closely, they disappear into their holes.

Difficult to find at first, until one has learned how to look, is the relatively uncommon two-to-three-inch Yellowface Pikeblenny (photo 7) which sports a distinctive Daffy Duck profile.  They inhabit small holes in areas of sand and coral rubble, and prefer clear water in depths of 15 to 60ft. When sitting inside their tubes with only their heads above the sand, their slender bodies closely resemble the stems of dead algal bushes and grass stubble scattered about their sandy habitat. As was the often case, I stumbled upon this specimen while slowly inching just above the bottom. Once I knew where he was and what he looked like, I would return many times to try to get a picture of him with his dorsal fin extended.  I finally succeeded only after taking with me a mirror; when he spotted his reflection he instantly displayed the aggressive behavior characteristic of the tube blennies: mouth wide open and dorsal fin flared.

Bonaire blennies: an illustration of the fact that fish don’t have to be big to be interesting.

Editor’s Note: If you loved this, check out the Colorful Shrimp of Bonaire

An avid amateur photographer, Charles (Chuck) Shipley was a Professor of Computer Science until his retirement in 2005, when he and his wife Barbara moved aboard their 2001 Kadey-Krogen 48 North Sea Tusen Takk II. They have been cruising the Caribbean since January 2007.

Charles Shipley
View More Posts
An avid amateur photographer, Charles Shipley was a Professor of Computer Science until his retirement in 2005, when he and his wife Barbara moved aboard their Kadey-Krogen 48 North Sea Tusen Takk II. They have been cruising the Caribbean since January 2007.