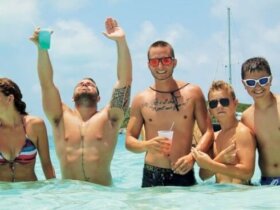 Intermarine Escapade: Rally to the Bahamas

Maybe you’ve picked up one of the new moorings in Portsmouth this month to attend the 4th annual Yachtie Appreciation Week. Or, perhaps you’re planning to cruise to the ‘Nature Island’ of Dominica to experience fantastic champagne-style diving at Scott’s Head to the south near Soufriere. Either way, take time to trek on the wild – and sweet – side. A visit to the historic 53-acre Bois Cotlette estate offers not only a peek into the past, but a hands-on opportunity to make real Dominica chocolate right from the bean.

The road from Soufriere up 1000 feet through the crater of the active Morne Plat Pays volcanic complex is nothing more than rubble in some places. The going is slow enough to get a good view of where sulfur vents have created rivulets of denuded vegetation against the otherwise lush green of the hillsides. At the end of the road, like a period at the end of a sentence, sits the Bois Cotlette estate.

Bois Cotlette is one of the island’s oldest surviving estates. It was founded in the 1720’s during the early years of settlement by the French, who by this time had already founded plantation estates on Guadeloupe to the north and Martinique to the south. Fast forward nearly 300 years, it was New Jersey natives, Jonathan Lehrer and his wife, Victoria, who got lost on a business trip to the island and literally stumbled across Bois Cotlette thanks to one of Soufriere’s residents offering to show them around. The couple fell in love with the estate, bought it, resurrected the centuries old coffee and cocoa production and opened the estate to the public. Today, Bois Cotlette features a collection of well-preserved French Colonial buildings. These include the recently renovated Maison de Maître, buildings for the processing of coffee and cocoa, and the only existing yet non-functional windmill tower on Dominica.

Since 2009, Dr. Mark Hauser, assistant professor of anthropology at Northwestern University in Illinois USA, has led excavations and unearthed a great deal of the estate’s past. For foodies, chocoholics or those who like to get a true taste of where they’ve cruised, it’s the bean to bar history of chocolate that is most fascinating.

Out of 35 acres suitable for farming on the estate, the other 15 being way too steep, cocoa grows on 5 acres. The cocoa farmed here is the high quality (lots of aroma with little bitterness), relatively scarce Criollo variety. This variety makes up only about 3 percent of global cocoa production, and in addition to limited supply, doesn’t bear as prolifically as the much more plentiful and supermarket variety of Forastero, so Criollo is usually more expensive. Thirty to forty cocoa beans grow in a pod the size of a small papaya. It’s from the pod that the Dominica Chocolate Tour at Bois Cotlette starts, led by Jonathan. He talks through and shows the old-time equipment used in the fermenting process that turns beans a chocolatey brown to the drying, roasting and grinding.

The tour’s dessert course is actually making chocolate. A building located next to the Maison is where Victoria sets up an open-air kitchen with two double boilers. Audience participation is the hands-on part of the tour and a necessity for the tempering and molding process. Victoria spices the demonstration with plenty of information about true chocolate and how to make it. Afterwards, the proof of the pudding is a taste of the finished product.

The single-source, heirloom-style, boutique-produced chocolate bars here are 70 percent cocoa, unlike the 11 percent in supermarket milk chocolate. Quality abounds as the Bois Cotlette bars don’t have sugar as a first ingredient.  They also use natural cocoa butter instead of vegetable oil and they don’t use alkalized cocoa (a process which reduces the health-protecting antioxidants in the bean.)

A visit to the Bois Cotlette estate is definitely a good way to get a true taste of Dominica, as well as to find some real chocolate to bring back and pack away in the galley.

While the programs in the USVI and the BVI were initially identical in curriculum, there was a vast difference in the number of membership applications