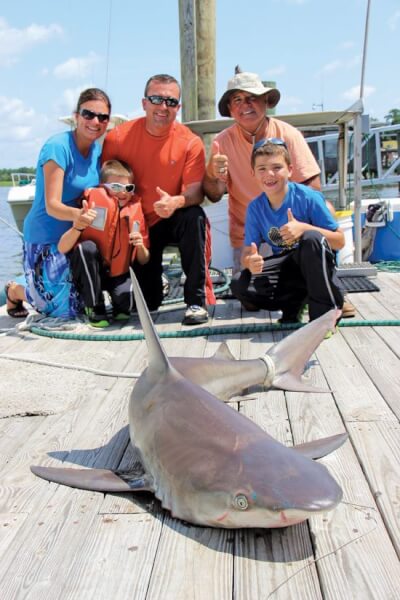 The temperatures are still hot, but there is a subtle change that takes place in the month of September. All fish are basically put on notice that fall patterns are pending. Just a few minutes less of daylight makes all the difference to those down under. This is not the month for migrations; it’s the month for feeding on everything available, especially shrimp.

Spotted sea trout, red fish, and flounder might feed at different times of the tides, but all of them like live shrimp. And this is the time of year when you can serve it up any way you like – naked, with or without any sort of leader or weight, or under popping or adjustable floats. Here is the secret to the fish’s bite in September: once you get the bite going, it’s easy to change your bait. For instance, if you start using live shrimp, and you run out, you can change over to any leftover parts from previous hits, or start using Deadly on Anything (DOA) shrimp patterns.

The DOA shrimp patterns work like a charm. Here’s how I use them: if you’re buying a pre-rigged DOA (purchased with hook and balance weight), remove the weight and hook. Then take a 2/0 to 3/0 Kahle hook, and hook the “shrimp” like you would a real one. Since you want the DOA to look as natural as possible, place the hook in the mid ship of the “shrimp.” Balanced on the hook’s bend, it become the prefect waving bait in current, under a popping cork or a adjustable float. The best colors are Root Beer, clear gold glitter, clear chartreuse tail, and golden cherry red. I suggest using ¼ DOA shrimp patterns. Another trick I use is to drop a few artificial DOA’s into my live well. I call this “adding juice appeal!”

September for us offshore fishermen is “Snag a gag month,” meaning the grouper bite is better, because things are cooling down and causing more movement. This month all grouper, including gags, scamps, and red grouper are more likely to be up and about. You’re most likely to find them along the bottom ledges at the Savannah Snapper Banks. These are basically ledges that are surrounded with sand. I like to call these fishing cites, because they contain all types and sizes of fish at a variety of depths. The best bet for bait would be live cigar minnows, or Spanish sardines, which can be caught with Sabiki gold hook rigs as they school over the artificial reefs. These bait are known for triggering a serious grouper bite.

Of course, a bigger fish sometimes wants bigger bait. Bait caught at the banks are normally those fish that have air bladders such as sand perch, rock bass, vermilion snapper, pin fish, and ruby red lips. These kinds of fish can bring on a big time grouper bite. Before putting them in a live well, though, deflate the air bladder with a sharp-point knife.

As far as top water bite goes, there have been a few kings caught near shore at the Savannah River Channel, artificial reefs, and at the Savannah Snapper Banks. The best bait for a king fish is the liveliest bait possible; blue runners, Spanish sardines, Spanish mackerel, and cigar minnows are a few good live bait choices.

During this time of year it’s also not unusual to catch dolphin, or Mahi-Mahi, while bottom fishing. Dolphins are curious fish, and they will swim right up to the boat. Just take your weight off you bottom rig, loosen your drag, and float your bait (squid or cut fish) right to the circling Mahi-Mahi. While doing this, throw a few pieces of bait freely over the side. That can really get them riled up, and once that fish turns on its feeding lights, it will suck bait in without regard. If there is more than on one Mahi-Mahi circling the boat, leave the last fish caught in the water until the next fish is hooked up.